Round 12: Brian Davis vs. Eivind Nitter 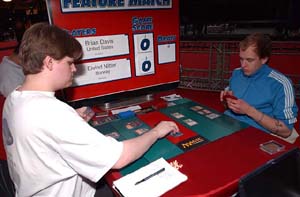 Brian Davis is the American kid who stormed through Pro Tour Chicago before Bob Maher Jnr stopped his charge in the final and has been competing successfully on the Pro Tour since. Eivind Nitter is the current European Champion and is no slouch at this format after making the finals Grand Prix Vienna.

Both are within touching distance of the top 8 with 10-2 records. Davis has a green-black deck splashing red and Nitter has a blue-white deck also splashing red although you wouldn't have guessed this from the first game.

Brian Davis chose to go first and dropped a Bloodcurdler on turn 2. He missed a land drop but still had a Crypt Creeper he could cast. Unfortunately Nitter had a Syncopate and the Creeper never even got as far as the graveyard.

Nitter was having worse problems. He only had an island and mountain and a Mesmeric Fiend showed Davis that red was only Nitter's splash colour. The American took the Looter to prevent Nitter from drawing out of his problems should he find a third land.

Nitter did manage to find a plains and then dropped a couple of Auramancers. They could only stop the Fiend as Davis now had a Frightcrawler to nibble at the Norwegian's life total. So Nitter used them to try and race.

A Shade's Form on the Frightcrawler tipped that in favour of the American, especially as the Bloodcurdler was taking Davis closer to threshold.

The American tried to seal the victory by temporarily borrowing one of Nitter's Auramancers with Temporary Insanity, gaining threshold and then swinging with his monsters for 8. Nitter had an Embolden to buy him a few more turns to try and find a land.

His deck served up an Abandoned Outpost to mock him. Then he pointed out that Davis had forgotten to remove cards from his graveyard through the Bloodcurdler's threshold ability. This was easy to back up and correct and Davis only received a warning.

"I'm sure Bloodcurdler is going to get me DQ'ed from this tournament. I'll probably screw up eight times or more," Davis said.

Embolden held off another lethal attack and then Nitter let the Bloodcurdler's ability stack so he could get rid of the Shade's form enchanted Frightcrawler with a Repel. Unfortunately Davis had another and he enchanted the Bloodcurdler to send it in for the win.

The game was kind of odd. Nitter hadn't drawn any land but Davis had ended with a hand full of green spells and not a single forest to cast them. Strangely, even despite the Bloodcurdler, the only indication Nitter had seen that might have suggested Davis was green was a Nantuko Cultivator.

In game 2 Nitter found land and held off Davis's early beats in the form of Organ Grinder and Crypt Creeper with a Phantom Whelp and Dreamwinder. 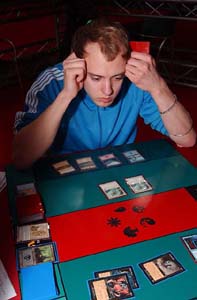 Davis sac'ed off a Diligent Farmhand to find his second swamp so he could cast his Carrion Wurm. Normally it would be a problem but Nitter had the Kirtar's Desire to neutralise it.

Davis enchanted the Organ Grinder with Shade's Form so it could attack without dying.

Nitter prevented damage by sac'ing the Hypochondria only to drag it right back out again with an Aurmancer. The Grinder still kept coming and was joined by a couple of Crypt Creepers in support. Nitter blocked those and used Embolden to save his blockers.

He made a mistake here as one of the Creepers sacrificed itself to take the Embolden out of the graveyard.

A Nantuko cultivator came in as a 3/3 for Davis.

Not as big as the 4/4 Wayward Angel Nitter dropped onto the table. The Angel meted out holy justice to the Cultivator but Nitter still had problems with the Shades Form on the Organ Grinder.

A Chainflinger appeared to give Nitter more headaches but at least he was able to Syncopate an equally dangerous Painbringer.

Davis made a big mistake here as he failed to spot if he used the Chainflinger's threshold ability to kill the Phantom Whelp this would give Nitter threshold and would force him to sacrifice the Wayward Angel as it was his only creature. He realised his mistake only as Nitter was drawing his card.

Then it was too late as an Auramancer provided firstly an extra body to sac to the Angel and took threshold away by pulling a card out of Nitter's graveyard, after he'd smacked Davis for 7 first of course.

"I blew the game right there boys!"

He was correct. 7/7 flying, trampling, does-not-tap monsters tend to be fairly decisive.

Davis started briskly, slinging a Crypt Creeper into the red zone and then summoning in a Nantuko Disciple for support and then a Frightcrawler for evasion. Nitter only had a Militant Monk but gained tempo back by Repelling the Nantuko Disciple.

Nitter's deck was in full defensive mode. He dropped Hypochondria and then shut out Davis's Creeper and Frightcrawler with Kirtar's Desire.

Davis continued to pose problems as a Painbringer appeared and was followed by a Carrion wurm.

Finally Nitter found a 5th land and could think about offence as Hydromorph Gull swooped into play. Defence was more of a problem though as Davis sac'ed the Creeper to remove the Repel in Nitter's graveyard and give him a card in his own graveyard to feed the Painbringer so it could remove the Monk. 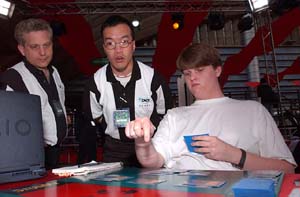 The Carrion Wurm wandered into the red zone and was pumped by the Nantuko disciple for a fat 8 points of damage to drop Nitter to 3.

The Norwegian wasn't done. Auramancer dug back a Desire to hold the Carrion Wurm and he sac'ed an Outpost for red mana so he could Firebolt the Disciple.

A Mesmeric Fiend stole a Circular Logic from Nitter's hand and revealed the Norwegian could limp on for a while as he had Syncopate and Embolden in hand.

Davis only had a Fiend and Painbringer on offence although a Dusk Imp joined later. Nitter wasn't finding any help from the top of his library and although time was approaching it seemed difficult to see how he could hold on.

Davis's library was far kinder as it gave him first one Chainflinger and then a second when the first fell to the flashbacked Firebolt.

Nitter was throwing all the cards he could to the Hypochondria but it was too much damage and he eventually succumbed in the first turn of extra turns.