Round 12: Brian Hegstad vs. Eugene Harvey 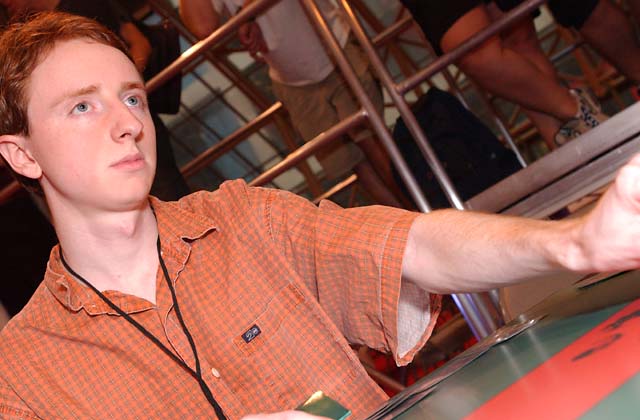 This clash of titans was a dismay to both parties. Going into this round, Team USA had managed to fish itself out of the gutter with a prodigious 15-0 run. Unfortunately, because they were the only two in their pod with the same record, they had to be paired against each other. Ordinarily, national team members aren't forced to play one another, but as it stands there isn't an exception in place to take care of this situation.

The two grudgingly presented decks. Hegstad tapped his opponents, and Harvey cut. Hegstad recoiled in mock outrage. "It's 'cause I'm ABU, right? CMU guys are trustworthy, but us..." He let the rest go unsaid.

Harvey's Phyrexian Battleflies came through the air for four damage while Hegstad summoned a Thornscape Familiar that gated in a Horned Kavu. Harvey had no better play by Turn 4, so he kept up the aerial beats.

A Coastal Drake from Hegstad gave Harvey pause, and he eventually chose to Rushing River them both away, and send with his Battleflies for two. Hegstad joked that they were really earning their keep.

Hegstad replayed his team and took another round from the Battleflies. He untapped and dropped a hasted Serpentine Kavu, clocking Harvey for eight. Harvey used Illuminate to deal with the problem, but held back on his flier.

Hegstad sent both his creatures and Harvey pushed his Battleflies in the way of the Coastal Drake. Hegstad tapped out and windmilled Explosive Growth, taking the first game. 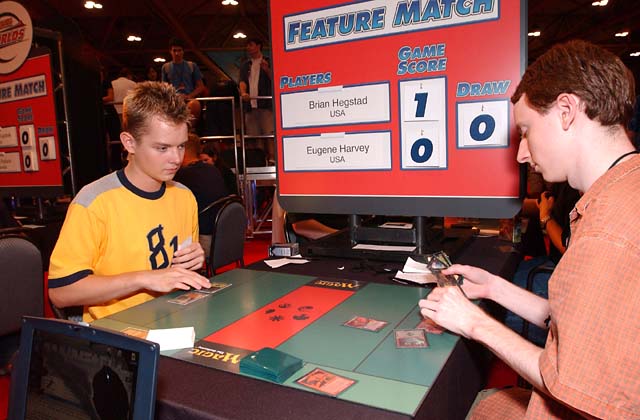 "Well, that wasn't much of a game." -- Eugene Harvey
"Those 'flies were working hard." -- Brian Hegstad

Because Harvey had lost his sideboard, he was forced to play without one. Hegstad took full advantage.

Harvey's Rogue Kavu ran into a Thornscape Familiar. He made a Shivan Zombie, but it was delayed with Repulse. Hegstad quickly had his three colors on the table, and gated a Horned Kavu via a Quirion Dryad. Harvey responded with Zombie Boa. He passed over to Hegstad, saying "Upgrade to Shivan Wurm?" Hegstad's reply was a sly "Perhaps."

He sent with the Kavu, and summoned a Savage Gorilla. Harvey drew a scream from him when he Reckless Spited his team and dropped Sinister Strength on his Boa. He swung for eight. Hegstad's next play was Quirion Dryad.

Harvey Bogged Down with kicker, and Hegstad responded with a kicked Jilt, wrecking his team. Still, he had no hand and only a 2/2 in play. He drew and passed the turn. Hegstad made a Zombie Boa. He pushed in front of the incoming Dryad only to see it fall to Explosive Growth.

Next, he Probed with kicker, taking out an island from Hegstad. He drew into gold, however. After taking a hit from the Dryad, he untapped and Terminated it. Then he Recovered his Boa. Hegstad still had no action.

After the Boa came back into play, Hegstad grabbed for gusto, sacrificing his Tinder Farm to cast Battery, then Shivan Wurm. Harvey thought a minute, then bought a turn's worth of life with Singe. He drew into Rushing River, which was a godsend, dispatching the token before it could cause trouble.

Hegstad drew Quirion Explorer, and at finally gated in his Shivan Wurm. The incoming Boa dropped him to one and Phyrexian Battleflies opened up the assault on a second front. Hegstad replayed the Explorer and sent with the Wurm, evening the score. Harvey looked at him sideways, and Hegstad dared him with "I might have something." Harvey sent the Battleflies, and Hegstad scooped.

Harvey began Game 3 with Quirion Explorer, but was outmatched by Harvey's Vicious Kavu. Looking at his board on his third turn, he couldn't believe what he had to do. 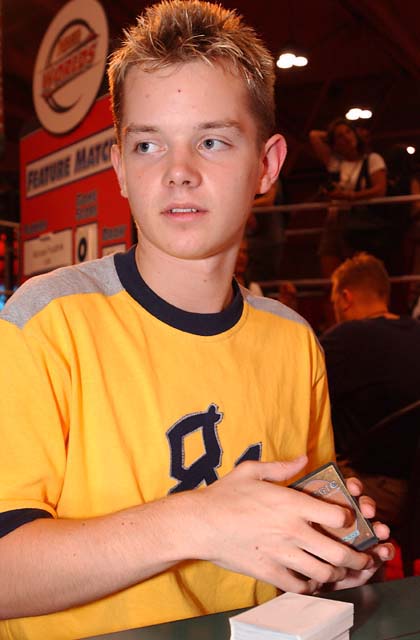 Sinister Strength came down on the Vicious Kavu, making it even more so. Hegstad took seven. He untapped, brawled for two, then mustered a Savage Gorilla to stand in the way of Sid Vicious. Harvey Illuminated it, and knocked him to six. He passed the turn back, saying "That's all I got." to which Hegstad replied, "Oh, THAT'S all you have. You don't have any more?"

Hegstad turned the tables, Repulsing the brutal attacker and bringing out a Coastal Drake as a more permanent answer. Harvey responded by removing his board with Planar Despair. All Hegstad had left was an Urborg Elf. Harvey Singed and brought back the Vicious one.

Hegstad checked his options, then made a Pygmy Kavu, drawing a card. He also brought out Quirion Dryad. Harvey sent his trooper. Hegstad gauged his chances, and decided to risk letting it through. Harvey dropped Soul Burn on the table.