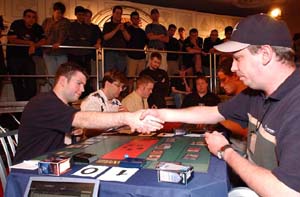 I sat down to watch the draft before round 12 and Paul Jordan seemed very happy: "Got my wish . . . feature match!" That's what happens when you're playing for the right to play on Sunday at the Pro Tour. He and his teammates Matt Urban and Josh Ravitz have the best team name in the event, in my opinion: Stalking Tiger, Hidden Gibbons. All three are regulars at Neutral Ground so that makes them the hometown favorites at this point. Ravitz is playing his first PT ever while Urban and Jordan have a bit of Pro Toru experience, no great finishes.

Their opponents, also 8-2-1 and also playing for Day 3, were the Car Acrobatic Team. Andrew Cuneo, Aaron Forsythe, and Andrew Johnson finished second at the team PT last year and they very much want another trip to Sunday. The winner is in and the loser is out, though the losers will be able to console themselves with invitations to Pro Toru New Orleans, something none of the six had when they showed up this weekend.

Their drafting strategies were almost identical and they wound up playing three mirror matches. Both teams prefer 5-color green in the middle (Cuneo and Urban). Urban has a Questing Phelddagriff, but Cuneo's three Hunting Drakes might be more powerful than the one hippo. Both teams prefer blue on the left and both Johnson and Jordan wound up splashing the same colors-black and white. Johnson actually has a lot more white than he normally drafts, but that'll happen when you open a Rout. Both A-seat players went black-red with a splash of white. That match-up should be quite ugly, though, as all three C.A.T. members opened up Magma Bursts in Planeshift and all three were passed down to Forsythe. The Gibbons didn't open any Bursts. Forsythe also has one of each Acolyte while the only hosers Ravitz managed to get were Honorable Scouts. He was sucking those guys down in Planeshift like they were Altoids. Ravitz does have a Goblin Trenches and a Void, but Forsythe's deck looked ridiculous even before he got passed a Degavolver. The consensus amongst spectators was that C.A.T. had the advantage in each of the three matchups, but anything was possible. 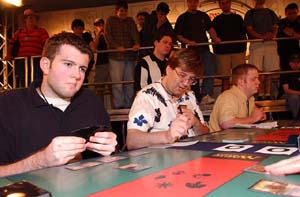 Game 1 between Forsythe and Ravitz was predictably bloody. They traded removal spells for several turns and Ravitz was forced to double-block a Lava Zombie and also lost two creatures to a Magma Burst. When the dust cleared, Forsythe still had a doubly kicked Degavolver and it went all the way.

Jordan showed off some fascinating technology in Game 1: Minotaur Tactician. The Tactician came out with haste on turn 4 and it was 3/3 for the entire game and Johnson was never really able to deal with it. Knowing exactly what your opponent is playing makes some cards have a radically different value in Team Rochester draft. Squee's Embrace on Stormscape Familiar added to the pressure being applied to Johnson's life total and Jordan soon claimed Game 1.

Urban had a Questing Pheldagriff in game 1 against Cuneo, but he had some color problems early so Cuneo was on the attack the whole game. Cuneo had tapper advantage and was able to get in 20 points of damage, mostly with a lone Coastal Drake, and game 1 was his.

Ravitz had to mulligan before game 2 and then he stumbled on just three lands (noen of them red). Forsythe's draw wasn't exactly slow (Obsidian Acolyte, Vicious Kavu, Lava Zombie) and the C.A.T.s quickly had a match win up on their side of the feature match area tote board. 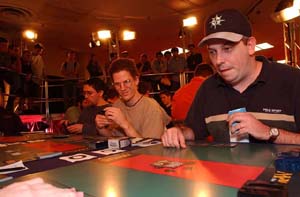 Urban had some decent ground fat again in game 2 (Savage Gorilla, Thicket Elemental, Magnigoth Treefolk), but Cuneo once again had the only fliers involved in the game. Coastal Drake and Gaea's Skyfolk softened Urban up and then 15 seconds after Forsythe finished off Ravitz, Cuneo played Life and pushed all of his lands into the red zone. The Car Acrobatic Team was headed back to the finals.

Paul Jordan put things into perspective for Stalking Tiger, Hidden Gibbon when someone was trying to console him about not making Top 4.: "Whatever! I was expecting to play the PTQ today!"