Round 12: Carlos Barrado vs. Nicholas Labarre 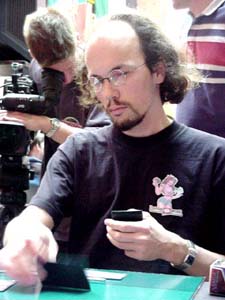 Nicolas finished second at Pro Tour-Rome in 1998 and finished 8th at Worlds 2000.
Carloswas 11th at the 2000 European Championship. Both players chose red-green beatdown for the constructed part of the tournament.

Although Carlos won the dice roll and chose to start, Nicolas's Grim Lavamancer was the first creature. Next, both players cast a Wild Mongrel, but Nicolas's got a Volcanic Hammer to its head and died upon impact. Carlos laid out a Lavamancer of his own, while his Mongrel was sent out to attack. Nicolas attacked back with his Lavamancer and put an Elephant token into play through Call of the Herd.

They kept on playing creatures each turn and attacking with them in the most advantageous way possible. Call of the Herd was seen on either side with Carlos' tokens being the most remarkable ones. He claimed the Elephants were lent from a friend. They were green Magic cards covered with a picture of a lady in a black dress, who appeared to be an actress on a TV show in Spain.

During one Mongrel attack Carlos showed a studying face as he looked at Nicolas to see how he would react. The Frenchman wanted the Mongrel dead so he blocked with an elephant, causing Carlos to empty his hand to keep the Mongrel alive and killing the token. The two cards that Carlos had discarded were used to slay the opposing Grim Lavamancer while activating his own. Nicolas finished the job of clearing the table from creatures, playing two Firebolts on Mongrel and Lavamancer.

Nicolas then cast Basking Rootwalla to 'fill the void'. Elephants reappeared through flashback but Carlos confidently played Kavu Titan with kicker. This got Nicolas looking thoroughly for a way to deal with the huge trampler. Carlos' elephant was hit by a Hammer, but the Titan trampled Nicolas' life total down the drain. A Flametongue Kavu cast by Labarre seemed to give him another chance to win but Carlos simply showed the Violent Eruption in his hand. This was proof enough for Nicolas to recognize defeat as he was too low on life and would be out of blockers. 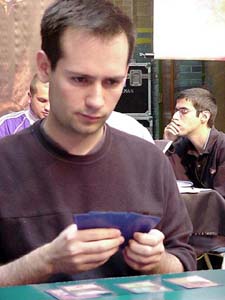 Seeing how Nicolas' removal department had trouble with big creatures, Carlos sided in his Shivan Wurms. With muffled voices the adversaries exchanged comments while sideboarding took some time.

Nicolas started off with a Grim Lavamancer which was allowed only one attack after a Volcanic Hammer struck it. A second Lavamancer replaced it, but soon faced an elephanttoken. Pierre got rid of it with a Flametongue Kavu. Both Lavamancer and Kavu were soon met with burn to the head. Carlos had also dropped a Keldon Necropolis which could prove key should the game last long enough.

A cameraman immortalized Carlos's confidence for the Spanish television as he put more creatures in the game. And Nicolas made sure his picture was taken too, as if he knew what was to come.Carlos got a kicked Titan in play, and a Shivan Wurm was ready in his hand to claim the game his. With both Hammer and a Firebolt the Titan was out of the game. Nicolas emptied his hand to save his Mongrel from dying to another Volcanic Hammer. He now would have to live from the top of his desk, with Carlos challenging him with a Call of the Herd.

Nicolas drew a Flametongue Kavu and killed the Call. His Mongrel put Carlos at 12 life. It now was Carlos' turn to cast Flametongue on the opposing one. Nicolas simply topdecked another one and a Wild Mongrel right after that, leaving Carlos no chance. The look on Nicolas face said it all: "Did you see that?"

With such aggressive decks there were still 35 minutes left in the round Nicolas mulliganed when his hand only showed green mana. His next hand showed a more realistic start even though four lands might seem a little too much.

Nicolas failed to change his seemingly bad luck. He got to see a few too many Basking Rootwallas, which were no match for the Shivan Wurm and kicked Kavu Titan Carlos put in play. Things started looking very bad as Nicolas seemed unable to play anything significant. As he died to huge creatures he showed his hand with four mountains.