Round 12: Carlos Romao vs. Alex Shvartsman

After a big Day 1, Shvartsman had fallen to sixth place in the standings thanks to an 0-3 performance in Auction of the People. Carlos Romao had taken the other road to meet him there, and now they would fight in Team Rochester. The big man was eager for action.

Romao played first had exactly the sort of start he wanted to see. Headhunter hit play on turn two, and Swat got rid of Broodhatch Nantuko to cost Shvartman another card. Shvartsman steadied his defences with Daru Healer. Romao readied a face-down Haunted Cadaver, but Shvartsman also had Glory Seeker, so that plan wouldn't work out. 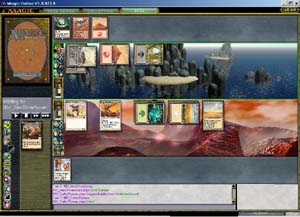 (click to open full-size in a new window)He waited. Shvartsman came down with Barkhide Mauler. Chain of Plasma took out the Glory Seeker and Haunted Cadaver, but that was ok. Romao made a Wretched Anurid and hoped his Infest plan would work. Shvartsman made a Dive Bomber and then swung in with the Mauler. Romao happily doubled up, and then Infested his board.

While Shvartsman drew lands, Romao busted out Charging Slateback and Thrashing Mudspawn. Shared Triumph for Soldiers was no help, but Daru Lancer was. It entered play face-down. Here, Romao forgot that Dirge of Dread was a sorcery. As a result, he lost his Mudspawn in combat. It didn't matter. Shvartsman's only trick in hand was Inspirit, no good against a Dirged-up Slateback the following turn.

Shvartsman was first on the board with Catapult squad, but Romao drew his Headhunter, and threw it down with a chant of "Headhunter! Headhunter!" The cries intensified as Shvartsman cycled, played a land, and then had no play. Crown of Suspicion removed the blocker and Romao's Headhunter smashed in. Shvartsman averted disaster with a cycled Sunfire Balm. 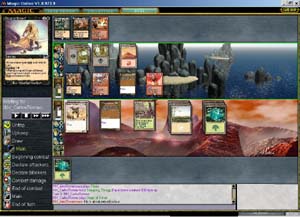 (click to open full-size in a new window)Shvartsman threw up defences in the form of Glory Seeker and Elven Riders. The Seeker hit, and Romao had Solar Blast for the blocker, stealing another card from Shvartsman. Piety Charm traded for "turn Charging Slateback face-up", and then Improvised Weaponry made sure the Glory Seeker was here to stay.

Romao had plenty of gas in hand. He put down a pair of fatties face-down. Shvartsman a face-down guy of his own. Romao turned his Snapping Thragg face up, then Dirged his team and smashed in. Shvartsman fell seven and lost what turned out to be Daru Healer. The following turn Romao attacked all out for the win.