Round 12: Carlos Romao vs. Mike Turian 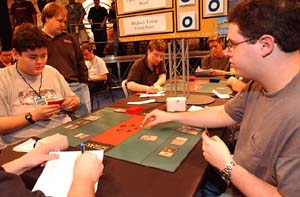 "Turian! Join YMG...we want to have a member at every feature match station," shouted Justin Gary referring to Darwin Kastle and Rob Dougherty also preparing to square off with their opponents at two of the three other stations.

Any team would do well to have either of these fierce competitors although both players are fighting to keep their fading hopes of a money finish alive at 7-4-1. As they shuffled up Turian poked fun at Carlos's tendency to play Tog in premiere events. "So what? You took your Worlds deck and shuffled in some Extended cards."

Carlos won the roll and opened with an Island. Turian played a Swamp and Duressed the World Champion but Carlos kept his cards a secret with a Force Spike. "I guess I'll take Force Spike," deadpanned Turian.

Sapphire medallion tapped him out for turn 2 and Turian's second Duress would not be denied. Thwart, Mana Leak, and Underground River remained in hand and a Fact or Fiction went right in the bin and Turian played a Treetop Village.

Carlos played his second Underground River and cast an EOT Accumulated Knowledge after taking three form the Village. "Devastating," was all Turian could muster. Carlos continued to play non-basics and Turian began punishing him for it with a Dustbowl that proceeded to eat a Cephalid Coliseum and two Underground Rivers as the game proceeded at a very brisk pace. Keeping his Dustbowl fueled was also keeping Turian's mana tight and a Ravenous Baloth was skewered on the business end of a Force Spike.

In fact, Turian's next three spells were countered. The Champ took a Leak on successive attempts at Spiritmonger and a Yavimaya Elder was straight-up countered but Turian was able to sneak down a Pernicious Deed in its wake. Carlos was able to return the favor when he cast Diabolic Edict to 'dustbowl' Turian's attacking Village. Slowly Carlos's basic lands found their way into play and Turian got a creature to stick with a Spike Weaver.

The Weaver started swinging and another Elder was Thwarted. A Ravenous Baloth joined the green team and Carlos was running out of time. He was up to seven basic lands and down to three life when he cast Cunning Wish for FoF at the end of Turian's turn. He opted for FoF, AK over Island, Delta, Intuition and cast AK for two cards—one of which was another AK, which drew him another three cards—thank you Sapphire Medallion!

When Carlos untapped he happily drew the fourth AK off of the to of his deck and grabbed another fistful of cards. He played an Island and discarded Medallion and Force Spike. Turian could not believe the swing in the game's momentum and could hardly be called optimistic as he attacked for the kill. Cunning Wish found the inevitable Hibernation returning both creatures and the Deed to Turian's grip. He attempted to recast the Baloth but Mana Leak was up to the task with only two mana available. Intuition for Psychatogs looked to game but Turian still had some fight left in him.

The Tog was protected from an Edict with Counterspell. Turian untapped and attempted a Living Death. The Champ Intuitioned for two Counterspells and a Mana Leak and Mike could only lay a Bird to chump with and try to buy another turn. Carlos wasn't eager to see Mike untap and his FoF revealed an Edict, which sealed the game right then and there. 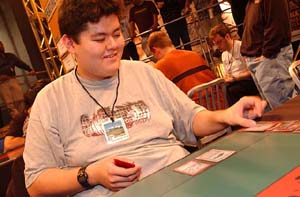 Turian could not believe that the game slipped out his grasp, "AK, AK, AK, AK!!! I mean c'mon!" He sided out a variety of Spikes, Trellis and Tutor to bring in Phyrexian Negators and Filth.

Turian led off but had zero early pressure or disruption. His Baloth was Spiked on turn four. All weekend long, the Sideboard staff has been marveling at Turian's ability to know what to name on Cabal Therapy based off of his reaction. He named FoF but found instead two Edicts, Tog, Intuition, Wonder, and a Polluted Delta. Nonplussed he animated his Treetop and used it to flash back therapy, naming Edict. Carlos shrugged and Intuitioned for three AK's. There was no reason to be shy about cards in hand at this point and Carlos played his Tog.

An Edict took down the Tog and Carlos's reloaded with an AK for three cards. No one seemed more surprised than Turian when his Spiritmonger resolved on the next turn when a FoF only offered a Force Spike whose time had passed. Carlos passed the turn waiting to use the FoF he picked up last turn. Baloth triggered the FoF, which yielded the Brazilian a Mana Leak, and an AK that would be worth four cards over Edict, Leak, and a land. After grabbing four more cards Carlos took a Leak on the Baloth and Turian played a Treetop Village. Carlos played a Wonder to buy a turn.

Turian animated his Treetop and Carlos cast Edict in response, no rookie this Turian, he animated again—in response to edict—and lost the man land. The Monger took down the Wonder and Turian attempted an Elf, which was countered. Carlos had nothing and Turian could scarcely believe he got the win.

Carlos opened with Island and used it to put a Force Spike through Turian's Bird and his spirit—he had kept a one-land/BoP hand! He peeled a second land but missed his third land drop while flicking his seven cards in disgust. When Turian announced his discard step after missing another land drop Carlos cast FoF. "Great! Every feature match!" muttered the CMU'er. FoF put Wonder, Island, and Edict in his yard and yielded a Mana Leak and a Cunning Wish. Turian discarded an impossibly expensive Phyrexian Plaguelord.

Carlos was sitting comfortably on five lands when Mike found his third (Mike: "Yay!") and cast Elder drawing the aforementioned Mana Leak (Mike: "Frown"). At the end of that turn Carlos used the Cunning Wish to retrieve a FoF from his board (Mike: "Great..."). 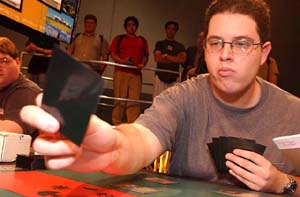 It seemed like a good time to play Tog and that's exactly what the Champ did and protected it from Edict on Mike's turn with a Leak. The Tog flew over for one—the math was not quite right yet. Turian had drawn and played three consecutive lands and attempted Spiritmonger. Fact or Fiction gave Carlos three more cards and he untapped. Cunning Wish found Gush. The alternative casting cost of "return two islands" made Gush into Might of Oaks. With Wonder in the Brazilian's bin and another Fact or Fiction it wasn't even necessary to do the math.

After the match Romao revealed that he could have won Game 2 by taking a FoF pile with Cunning Wish and using that to choreograph a Corpse Dance with a Tog in his yard for the win. "I realized this as soon as we were shuffling. If I had lost Game 3 I would have been very upset."

Said Brian Kibler after the match: "Turian would do so much better if he would just learn to mulligan—he keeps the worst hands."

"He kept Force Spike in against Rock?" Kibler pondered upon learning about the spiked mana bird. "Although with the hands Turian keeps... it might be the right play!"