Round 12: Cats and Bombs

As Pro Tour Nagoya settled back in for five final rounds of Scars of Mirrodin Block Constructed, the feature match arena lit up at the announcement that two Hall of Famers would be battling under the bright lights. Their names? Rob Dougherty of the United States and Tsuyoshi Fujita of host nation Japan. Dougherty was a former member of the überteam Your Move Games alongside fellow Hall of Famers Darwin Kastle and Dave Humpherys. Fujita was the first Japanese member of the Hall of Fame, and is always a fan favorite at Japanese Pro Tours.

Rob opened on Darksteel Axe while his opponent had a Mycosynth Wellspring to develop his deck's red, green, and black mana base. A Mortarpod for Dougherty gave him the first creature of the duel, but it was quickly matched by Trinket Mage from Fujita revealing the Japanese player was playing four colors, not three. With a board of Plains and Inkmoth Nexus for mana sources, it looked like the American was playing the popular Tempered Steel deck, but his cards were definitely not mainstream: in addition to the Darksteel Axe and Mortarpod, Dougherty had also cast a Kemba, Kha Regent. 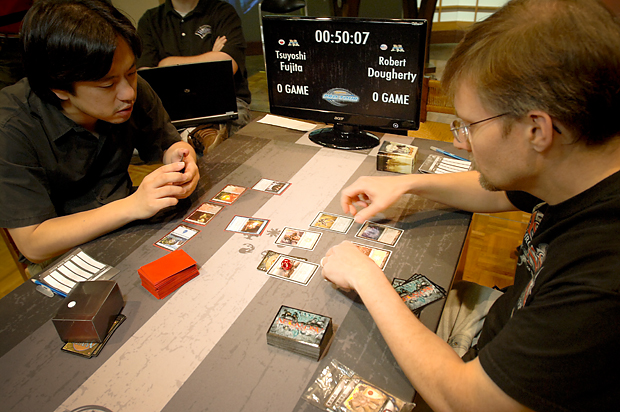 A blast from the past: Hall of Famers Tsuyoshi Fujita and Rob Dougherty battle it out in a feature match.

The weird hits kept coming as Accorder's Shield joined the battlefield for Rob, though he found his Kemba dispatched by a fully powered Galvanic Blast from his opponent. Tsuyoshi had begun attacking with his Trinket Mage, but neither player was putting up a significant offense and the game was settling into something of a stalemate.

Trying to break through and garner an advantage, Dougherty cast Indomitable Archangel with metalcraft, giving him a powerful threat his opponent was going to struggle to dispatch. The 4/4 flyer began picking up Equipment and was soon a 6/7 flying, vigilant attacker. Fujita tried to come up with an answer, but all he found were Mycosynth Wellsprings and a Ratchet Bomb. Those weren't going to help him, though the Wellsprings did thin his deck a bit, and he leaned across the table to survey his opponent's side of the battlefield.

He used the Bomb to take out the Accorder's Shield and remove his opponent's metalcraft, then cast Oxidda Scrapmelter to blow up Mortarpod. He still had to deal with a 6/4 Angel, but at least he had added more attackers and dealt with some of his opponent's artifacts. Dougherty, to his credit, wasn't affected by his opponent's plays at all. He cast a second copy of Darksteel Axe and continued attacking his opponent for significant chunks of life total.

Firing back, Tsuyoshi Fujita made his own attack with Trinket Mage and Oxidda Scrapmelter, then blew up the world with a Black Sun's Zenith large enough to both take out his opponent's creatures as well as his own. The Japanese star still wasn't out of the woods, however, as Rob simply cast a replacement fatty in the form of Kemba, Kha Regent, which was soon pumping out Cat tokens for being equipped.

That was enough for Tsuyoshi, who scooped after taking a big hit from the head Cat with the rest of the army breathing down his neck.

Flayer Husk led the way for Rob Dougherty in the second game, while his opponent again worked on developing his mana base via Mycosynth Wellsprings. A Glint Hawk for Rob allowed him to further build his army while his opponent sat back on three mana. When the American attacked, Tsuyoshi used it to cast Go for the Throat on the Glint Hawk.

That slowed Rob down considerably, and Fujita took advantage with a Tezzeret, Agent of Bolas that turned a Mycosynth Wellspring into a 5/5 creature. His opponent killed the powerful mythic rare a turn later and cast Kemba, which he equipped with Sylvok Lifestaff. The 2/4 legend soon began cranking out Cat tokens, and it looked like Dougherty was going to walk away with the match. 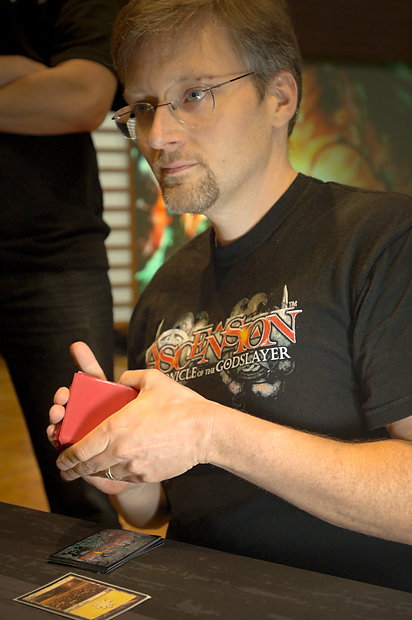 Dougherty is one of the game's early greats.

Indomitable Archangel joined Rob's team, and the smackdown grew harder and harder for his opponent to bear. Tsuyoshi used a Beast Within to take the Angel out, but continued taking beats. He cast Consecrated Sphinx in an attempt to pull back ahead, but it wasn't clear that the 4/6 card drawing machine would be enough.

For a moment the game stalled while Dougherty tried to figure out a path through his opponent's Sphinx. A Tezzeret, Agent of Bolas added more problems for the American to deal with, and a Ratchet Bomb to destroy his plethora of Cat tokens at a moment's notice was a serious cause for concern. He tried to sneak in an attack to take out the planeswalker, but when his opponent used the Bomb to stop the assault, Rob packed it in to save time for the third game, out of cards and facing down an opponent with a better board and a full grip thanks to the Sphinx.

With everything on the line, Tsuyoshi Fujita peeled an opening hand to reveal only a single land: Forest. After his opponent declared a mulligan, however, Fujita opted to keep the hand hoping to rip a second source of mana for the Mycosynth Wellspring he was holding, which would fuel him to sufficient land drops. He missed on the first turn while Rob cast a Glint Hawk, then Darksteel Axe. He got the second land on his second draw, but rather than cast Wellspring he opted to use Go for the Throat to take out his opponent's Hawk. 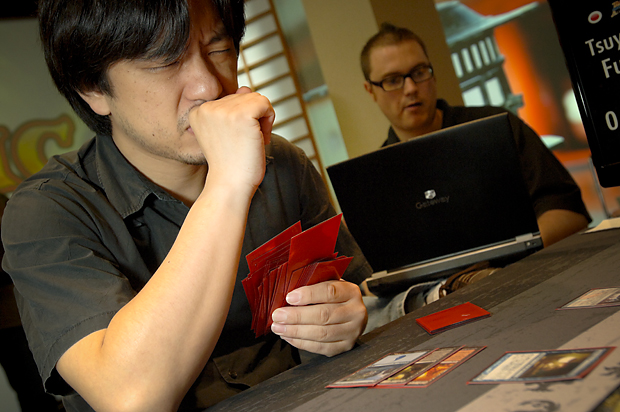 Fujita is... well, also one of the game's early greats.

It was actually Dougherty who missed a land drop on his third turn, while Fujita found a Sphere of the Suns. All Rob could do was attack diligently with Inkmoth Nexus while his opponent ramped up and picked apart his hand with Despair. When the American finally got to three mana he was able to cast Kemba, Kha Regent but his opponent had a second Go for the Throat and it was all Tsuyoshi from there. The Japanese pro picked off his hobbled opponent's threats one at a time before finishing Rob off with Consecrated Sphinx, a Beast Within token, and Karn Liberated.

4 Kemba, Kha Regent 1 Sword of Feast and Famine 1 Sword of Body and Mind 1 Sword of War and Peace 1 Mirran Crusader