Round 12: Christophe Lippert vs. Jeroen Remie 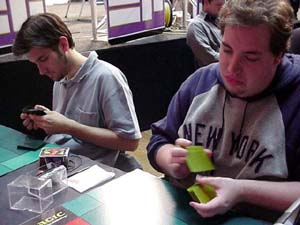 In the 12th round of the 2002 European Championship, Christophe Lippert from Germany faced Jeroen Remie from the Netherlands. The two players were both at an 8-3 record, and another loss would effectively throw them out of contention for the Top 8.

Remie won the die roll and chose to play. He kept his opening hand, while Lippert took a mulligan. The Dutchman then played a turn one Basking Rootwalla, a turn two Basking Rootwalla and a turn three Meteor Storm.

Lippert answered by playing a turn three Psychatog. Remie wasn't all too satisfied with that, and used a Violent Eruption, dealing four damage to the atog. Lippert had no intention of letting it die, though. He discarded an Underground River and a Swamp, then he removed them from the game to give the Psychatog +4/+4. During the following attack, he blocked one of the Rootwallas, and discarded a Memory Lapse to keep the Atog alive.

The two players started a race—Remie needed to deal enough direct damage to Lippert before the Psychatog would be big enough to kill him. A Violent Eruption took Lippert down to nine. The German killed the Rootwalla with a Chainer's Edict, then he attacked with his Psychatog and played another one. Remie Firebolted Lippert down to seven.

The German then played Fact or Fiction. He picked three lands over a Probe and a Force Spike, and then he attacked with his two Psychatog to bring Remie down to 16. The Meteor Storm took him down to three life—but Remie had only one card left in his hand, and thus Lippert was able to finish him off by attacking with both Psychatogs and pumping them both to 8/8.

Remie chose to play in the second game as well. He kept his hand while Lippert mulliganed, just like in the previous game. The Dutchman got out a turn one Basking Rootwalla and a turn two Basking Rootwalla, and he started attacking. In order not to take too much early damage, Lippert chose to Ghastly Demise one of the Rootwallas twice to kill it. Still, he was down to eleven, and one attack later, he was down to eight.

During the following attack, Lippert played a Fact or Fiction, flipping over Upheaval, Force Spike, Ghastly Demise, Island and Memory Lapse. Remie chose to put the land and the Demise in one pile, which Lippert chose, and finally, the German got rid of the Rootwalla. However, Remie merely played a Meteor Storm. Two turns later, the game was over. 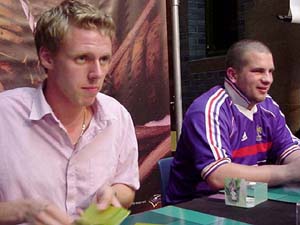 Lippert got to play first in the deciding game, and finally, he got to keep the first seven cards he drew. Remie bust out a turn one Basking Rootwalla that started attacking, while Lippert summoned a turn three Psychatog. However, Remie answered by playing a Nantuko Blightcutter, which resolved.

The German cast a Probe without the kicker, and dumped an Atog and a Memory Lapse into his Graveyard. Meanwhile, the Dutchman had to keep up some pressure, and he started attacking with the Blightcutter, taking Lippert down to 15 life. He also played a Grim Lavamancer and a Yavimaya Barbarian, but the Barbarian was countered by a Circular Logic.

Lippert wanted to fill up his hand and his graveyard, and a Probe with kicker helped him doing just that. Remie discarded a Firebolt and a Flametongue Kavu. He continued to attack with his Blightcutter though, and he then played a Flametongue Kavu which forced Lippert to remove quite a few cards from the game to save his Psychatog. The German then Ghastly Demised the Lavamancer and Chainer's Edicted the Rootwalla.

Meteor Storm made things look much better for Remie. With threshold, he was able to attack for three every turn, and even though a Yavimaya Barbarian was Force Spiked, Lippert soon found himself at ten life only. He got a Chainer's Edict that killed the Flametongue Kavu, but with three cards in his graveyard and only one in his hand, the Psychatog just wasn't strong enough to make a difference. Two turns later, the Meteor Storm finished Lippert off.