Round 12: Dan Clegg vs. Laurie Dunning 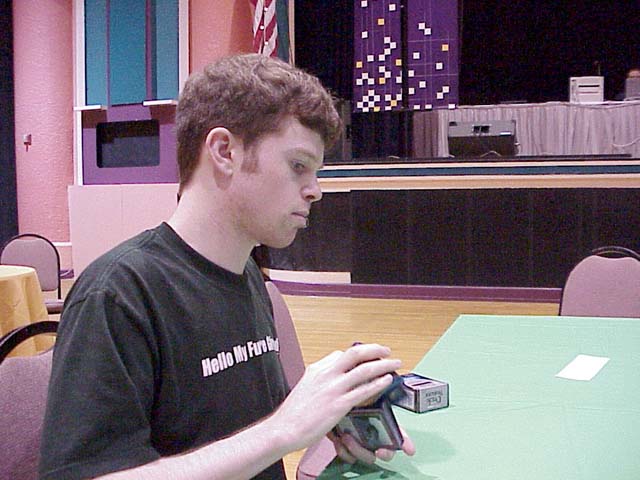 Dan Clegg Laurie Dunning is part-owner of a store named Magic Jungle here in Tampa where Team Goodfellas plays. She's also one of the more successful members of Team Goodfellas with several Pro Tour appearances and some Grand Prix money under her belt. She took on Dan Clegg in round 12 which each needing just two more wins to advance to the Top 8.

Clegg busted out a turn 5 Sengir Vampire in game 1. After Clegg's Mesmeric Fiend stole her Aven Windreader and his Faceless Butcher stole her Cloudchaser, Dunning wound up with nothing that even resembled an answer to the big flier. When Clegg followed up with his Repentant Vampire all Dunning could do was laugh "that's lot of vampires."

Game 2 wasn't much more exciting, but it did have a different result. Clegg had to discard multiple times before he played a spell and once he finally did draw a third land (a Seafloor Debris), Dunning bounced it with Dematerialize and then Churning Eddy and then Dematerialize again. Clegg actually did manage to stabilize the board while at five life, but Dunning was digging for a kill card with Compulsion. Clegg played Concentrate, saw three land, and promptly conceded so they would have 20 minutes left for the final game. 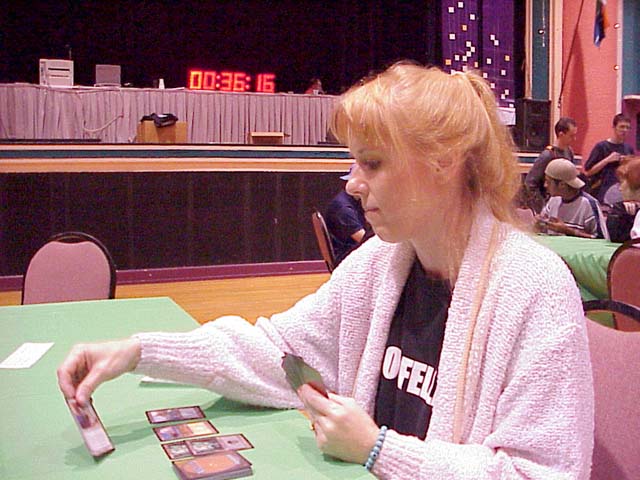 Laurie DunningBoth players were about equally screwed in game 3. Dunning kept a draw with three Plains and fur blue cards while Clegg decided to cash his draw in for a new one. Clegg's decision worked out much better. Dunning drew a swamp and a fourth plains, but never did draw the island she needed. Clegg busted out fourth turn Sengir Vampire (thanks to Millikin) and then looked over at his seemingly helpless opponent and asked "Second Thoughts or no?" Dunning giggled and answered "I'm having a lot of second thoughts today."

Clegg debated, played Concentrate, and then served. Bye-bye Vampire. His other vampire then got milled away by Millikin, Dunning drew an island, and suddenly it was "game on!" Clegg played Unhinge followed by Sadistic Hypnotist and suddenly Dunning lost all five of her cards. Clegg's Psionic Gift took out Dunning's Cephalid Looter and Clegg was up more cards than anyone could count. Basically, he "trashed" her out, using card advantage to set up a date with Jeff Fung for the table championship and a Top 8 berth.