Round 12: David Price vs. Darwin Kastle 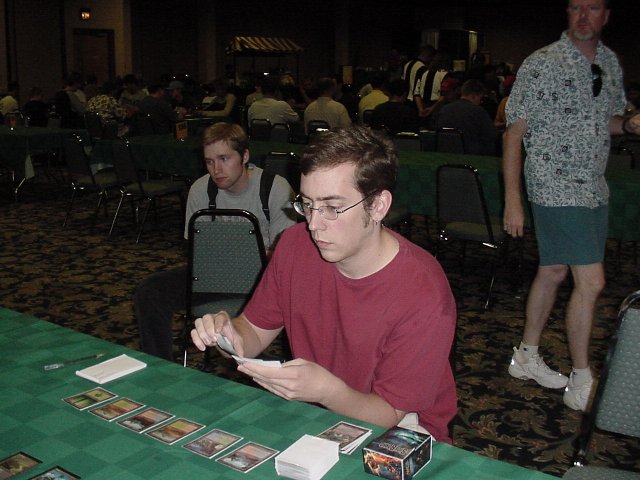 These men face off against each other again. They have ben on opposite sides of the table, at the Invitational and various Pro Tours, with Kastle having the winning record to date. David "The King of Beatdown" Price is running a U/G/r beatdown deck with exactly that in mind. It has many tempo control measures (such as Repulse) and a small number of counters including Mystic Snakes and Excludes, which won't help much against Kastle's creatureless U/R/B control deck. Blurred Mongoose on Dave's side of the fence will be his biggest asset.

As the two get picked for Deck Checks this round they sit and banter with each other. While competitors, it is obvious that these two play for the love of the game and discuss the format. Kastle seems confident about his deck, having not had a single loss so far. Price is no less sure of himself, actually having a better record on the day (9-1-1), due to the fact that while Kastle is undefeated, he has 3 draws, the equivalent of 2 match losses. The decks come back A-OK for both players, they shuffle up, cut the decks and it's off to the races.

Kastle mulligans once and then keeps and starts laying the lands, Price on the other hand starts laying the beats, with an early Gaea's Skyfolk and Blurred Mongoose. Kastle recoils the Elf, but the goose is loose, and starts tearing into Kastle's life totals. This is compounded by Kastle's mana development stunting at 4, and allowing Price to start making some Fact or Fiction piles that are pretty brutal (2x Land vs. 3 business spells). Price slams down another Goose and it looks to be pretty much over for Darwin, but a Void for 2 from Kastle strips the geese from the board and a couple more creatures from Price's hand, leaving him with a pair of worthless Excludes and a Prophetic Bolt. A board stall only helps Kastle's position, and Price's tempo starts slipping away from him, additionally he has taken nearly as much damage from his own lands as he managed to deal to Kastle. Price actually Excludes his own Skyfolk in desperation, trying to get some benefit from the card (Kastle already had an Exclude on the stack). A third Mongoose from Price hits the table, but Kastle gets a pure 100% octane FoF (Void, Fire/Ice, Tsabo's Decree, Recoil and Yawgmoth's Agenda) Kastle takes the four card pile and Agenda goes to the graveyard. Void strips Price of his hand completely (and cooks his goose), and Kastle again begins the familiar pattern of laying lands calmly and setting up for a game ending Urza's Rage. (Price has dropped to ten due to his use of various pain lands.) 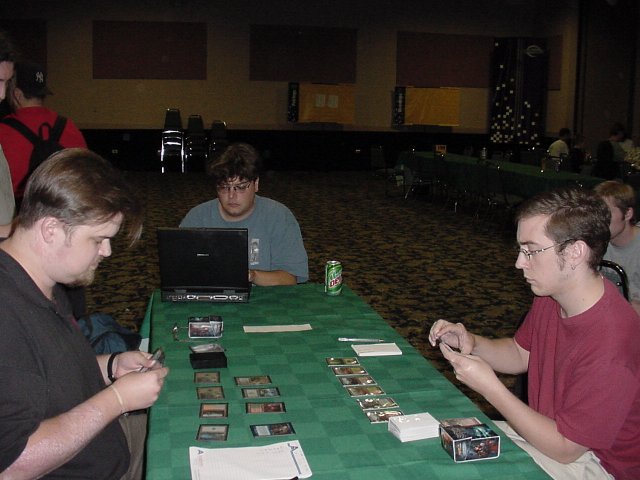 As they shuffled up for game two, Kastle looked at the clock (22 minutes left, plus the extra 10 given by the judges) and remarked with a surprized gaze on his face "18 minutes? That's really really fast for a first game with my deck, err.. well when I win anyway." Price returned the look and said "Well let's see if I can make the next game a whole lot shorter". That just might be the case as Price has to muligan again, but in an earlier match vs. Alex Borteh he doubled muliganed and still came back strong, so it seems to be the draw, not card advantage that wins him the matches.

Price leads off with a 2nd turn Flying Elf-Merfolk again, and on the next swings with the species confused creature and lets loose the goose again. Kastle admires the play as he obviously had the Gainsay for the Skyfolk, but could not get the mana up in time. He rages the Folk after taking a hit, but can only stare hard at the goose that is gnawing at his entrails. Kastle tries to set up for a Void to get rid of the pesky goose, by Recoiling Price's UU, but Ice delays that and Kastle brings out the Emblazoned Golem instead. While the goose is great at dealing with a helpless control opponent, it just tends to growl and sulk impotently while a 3/4 is on the board. A couple of huge counter wars erupt, but when the dust settles, Price is able to Prophetic Bolt the Golem off the board and send the hungry mongoose into the breech again. Alas, Price had to tap out to finally get rid of the Golem, and this gave Kastle the opportunity to Void away his creature base and reveal a hand of a bare Urza's Rage. While Kastle appeared to have total control at this point, Dave Fired a mix of Urza's Rage, Fire and Prophetic Bolt at Darwin's 7-point life total, and Kastle's 3 cards were just land, land, land. 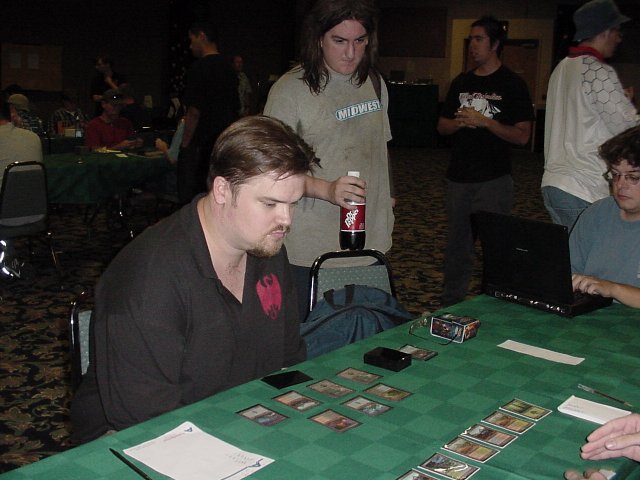 With 14 minutes left, they shuffled up quickly, making very few sideboard changes. Neither player really wants a draw here. No mulligans on either side and again Price has a 2nd turn Skyfolk. It gets Fired after swinging once, but Price comes back strong with another Skyfolk and Kavu Titan, but a Void from Kastle ends that nonsense before it even begins, and gets a 3rd Skyfolk from Price's hand. Price has only managed to deal 2 damage so far, while actually dealing 4 to himself. His tempo has been shattered, and if Kastle can ever find a second Blue sorce (by turn 8 he still has only 1 Island) this game should be all but over. Kastle brings out a 4/5 Emblazoned Golem and Price starts bouncing it. Eventually Kastle turns up a pair of 3/4 Golems on the board, and Price's bare Mongoose is just outclassed. A Decree for Mongoose clears out the blocker and Kastle's Golems enter the breech for the kill.