Round 12: David Rood vs. Billy Postlethwait 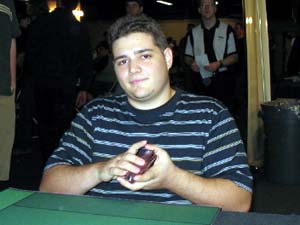 matchup of National Team alternates (David Rood is Canadian, while Postlethwait is American) featured two of the bigger deck stories this weekend. Postlethwait was playing Vial Affinity, the most popular deck in the environment and one that still manages to post strong finishes in spite of all the hate directed at it by other decks. Rood was playing a Gabriel Nassif-designed Tooth and Nail deck that splashes red only for Electrostatic Bolts. Thus far, it has served the Frenchies running it very well.

"I'm 100% Frenchie this weekend," explained Rood, a French Canadian. "I wouldn't be here if it weren't for Gabriel Nassif. He convinced me to come and gave me a decklist. I'm awful and yet I'm still 9-2, so something must be going right."

Game 1 was literally four turns of beats and a death for Rood, as he mulliganed and then drew no removal for Postlethwait's Cranial Plating and promptly died.

Rood's opening hand of the second game was 2 Cloudpost, a G/R Talisman, Eternal Witness, Electrostatic Bolt, Tooth and Nail, and Platinum Angel, leaving him with an extremely tough choice. He chose to keep, and then pumped the fist a bit when Postlethwait mulliganed. Oxidize destroyed an early land, and then promptly returned to Rood's hand with the help of Eternal Witness. Then Oxidize and Electrostatic Bolt cleared the board of Arcbound Ravager and a Worker companion. More removal blasted BillyP's permanents from existence and a pair of Tooth and Nails sealed the deal for Root, evening the match at one game apiece.

Jeroen Remie came up after game 2 and informed Rood that his deck was awful. "First of all, it's Nassif's deck," Rood answered. "If Gabriel was playing Bonesplitters and White Weenie, I would definitely run that. He's just that good. I mean, he finished 10th in Atlanta running a deck with Savannah Lions in a field full of Wake. Anyway, it's Gabriel's deck, but I'm winning with it, so it must be gas."

"Okay David, if you say so. Jeff Garza certainly didn't do very well with it when he played me," was Remie's retort. 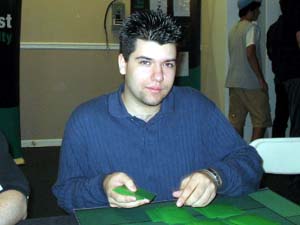 Five removal spells in the first four turns for Rood (including three Oxidizes) cleared Postlethwait's board, and earned some mutters from BillyP. Tel-Jilad Justice on turn 5 did it again. Eternal Witness plus another Justice killed a Chromatic Sphere and a Glimmervoid, and Postlethwait died with no permanents on the board, lamenting Rood's amazing draw.

"You see, Gabriel is basically playing for me," Rood said. "I would have kept my first hand in game 3 because it included a perfect mana ramp, but no removal. Gabe told me I should never keep it though, so I shipped it back and look what happened. I won the game when my opponent had zero permanents on the board."