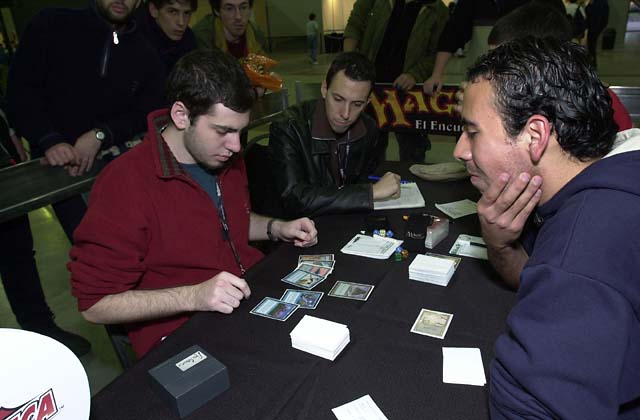 The last round of Day 2 is always the most exciting. It's the make-or-break moment, the round that decides who will be fighting for first place, and who will watch them do it.

Ostrovich, the reigning Argentinian National Champion, is running a mono-blue Orb-Opposition deck, with plenty of ACC countermagic and Masques-Block style flying beats. Ramirez is playing a version of red-black control, with plenty of burn for Ostrovich's horde.

Ostrovich won the die roll and opted to play. He came fast out of the gates with a turn-two Spiketail Hatchling. Ramirez one upped him by busting a Plague Spitter via Dark Ritual, leaving an extra mana open to prevent Spiketail shenanigans.

However, this cagey opening was wasted on Ostrovich, whose draw had not yielded a third island. He was forced to pass the turn back. Ramirez gave no quarter, creating a Chimeric Idol to put him on a short clock. Ostrovich had no Counterspell. Ostrovich again failed to produce a third land, and soon packed it in.

He was quick to pull all the land out of his deck and give it a thorough shuffling. He took great care sideboarding, knowing his back was against the wall. Ramirez, by contrast, was almost serene.

Game 2 blazed. Ostrovich was exposed by a Duress, losing a Foil and showing a hand of lands, Thieving Magpie and Thwart. He summoned a Glacial Wall on Turn 3, and Ramirez came back with a kicked Phyrexian Scuta. 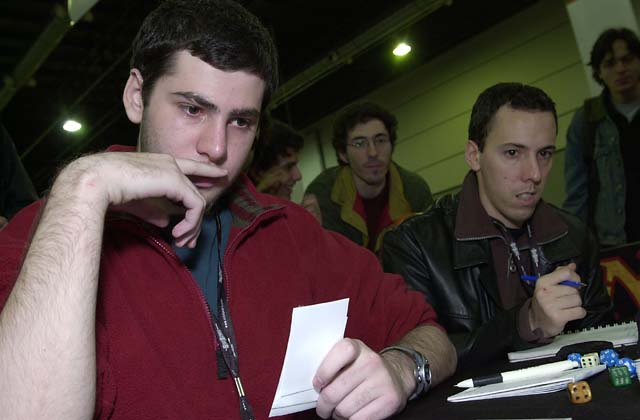 Ostrovich thought for a moment, then tapped out for Thieving Magpie. Ramirez did not like the dilemma it presented. He eventually chose his path: He attacked with his Scuta, and when Ostrovich blocked with his wall, he removed it with Urza's Rage. This left the Magpie free to fill Ostrovich's hand.

Ostrovich made him pay for his choice, casting Wash Out to send the Scuta home and save himself a lot of pain. Ramirez gamely recast it, but Ostrovich was ready with Thwart.

He worked at rebuilding his mana, Porting Ramirez to try to stave off disaster. Ramirez got around the problem with a sixth land, dropping a discard-kicked Thunderscape Battlemage. Ostrovich chose to lose Opposition and Island.

His hand was full of goodies, though, for his Magpie had been working overtime. Still, he felt it necessary to double-up. Ramirez played nothing on his turn, sounding his death knell. With no pressure and no way to remove the birds, he scooped in short order.

And so after two lightning games, the Top 8 berth would be determined by a single game.

Ramirez untapped and tried to Boil. Ostrovich flashed a Daze. He untapped and added a Ribbon Snake to his squad. Ramirez Boiled again, this time successfully, but the damage was questionable, considering Ostrovich had two Ports and an eager Magpie.

Ostrovich swung with his bird and watched Ramirez kick up a Scuta. He locked Ramirez with his Ports and took five to the stomach, digging for answers with his Magpie. He found a duplicate, and put it into play.

Ramirez was on the ropes, but had a window of opportunity. He opened with Duress. Ostrovich hesitated before picking up three islands for Thwart. This move put Ramirez into the Think Tank. Ostrovich's hand was primed for Foil, but did he have one, or was he bluffing it? He needed to act. He was at four, facing four power of creatures. 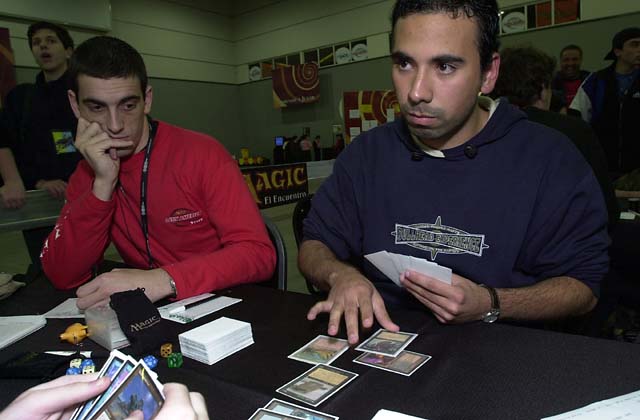 He took his time. He played Dark Ritual, bringing out a second, unkicked, Scuta. Ostrovich nodded his head once. Ramirez sent the kicked Scuta into the Red Zone, knocking Ostrovich to ten. He had two mana left to ground the Snake if need be. It was a precarious position, at best.

It was made even more so when Ostrovich attacked for two and dropped a . Ramirez fought as best he could, making a Blazing Specter to stop a Magpie, but the writing was on the wall. Ostrovich showed it to him with Opposition, taking the match.