Round 12: Donnie Gallitz vs. Kyle Rose 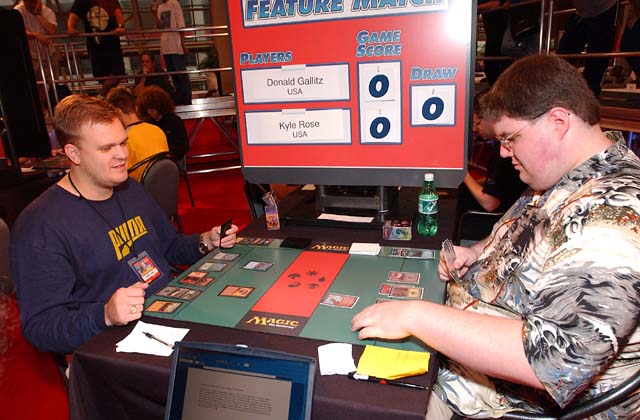 Knowing Kyle's deck from watching it being drafted, Donnie wanted to make his stay at the Feature Match table last as long as possible, facing impending annihilation from Kyle's overpowered five-color-green deck. Donnie says that he wished they could switch the names, with Kyle's name on top, so the match could read 'Rose - Gallitz,' the name of Donnie's wife. Banter swings back and forth across the table, mostly Donnie talking about how badly Kyle is going to have to crush him here, and Kyle saying that it's true, but that the game of Magic: the Gathering frequently likes to deliver the unlikely blow. Both players have an awful lot of experience at this game; Donnie Gallitz is the player who has been to the most Pro Tours without making a Top 8, missing only seven of them so far. Kyle's not exactly a slouch either, with numerous high Pro Tour finishes on top of winning Pro Tour-London, plus winning U.S. Nationals 1999.

Donnie won the coin flip and played first, dropping a Sulfur Vent and island, plus a Vodalian Zombie, to Kyle's mountain and forest. Donnie played a mountain and Bog Down after attacking, forcing Kyle to discard Ceta Sanctuary and Captain's Maneuver. Kyle cast Primal Growth to fetch his plains, and has no further play on his turn. Donnie attacks with the Zombie and cast Trench Wurm after he played his swamp for the turn. Kyle had Flametongue Kavu to kill the Zombie, but took the Trench Wurm rather than trading the Flametongue Kavu. Sparkcaster gates the Flametongue Kavu, and traded with Phyrexian Bloodstock. Donnie played another land and a Metathran Zombie, then attacked before his Trench Wurm got nailed by the Flametongue Kavu. Kyle kept the Kavu back rather than running it into the regenerating Metathran Zombie, but Donnie had one card in hand, and a Metathran Zombie plus Raka Disciple versus Kyle's full hand and second Sparkcaster, gating the Kavu once again. Temporal Spring let the Kavu attack first, and then Kyle had more cards to throw at Donnie, dropping Treva the Renewer and drawing Fire/Ice to remove Donnie's topdecked Coastal Drake and tapping the regenerator, then using Flametongue Kavu to kill the Disciple and attacking for eleven.

Across the table talk, Donnie cast Hypnotic Cloud, forcing Kyle to discard a Radiant Kavu, land, and Ancient Kavu, then conceding the game. 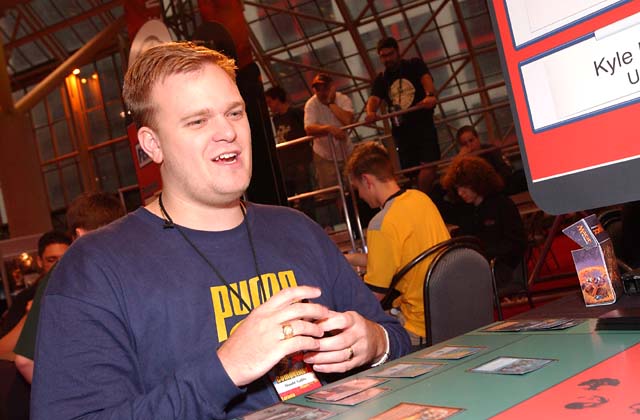 Donnie played a swamp and two mountains, and Kyle a forest, mountain, and island before the first spell was cast, Kyle's Pincer Spider. Donnie has a Trench Wurm on his fourth turn, and Kyle played a swamp and passed the turn. Donnie attacked with the Wurm and played Kavu Scout, while Kyle merely played another forest and passed the turn again. Again Trench Wurm hits him, and then Donnie played his Zombie Boa. Kyle played a second mountain and kicked an Illuminate at the Zombie Boa, only to find out the kicker is much more expensive than he remembered. Donnie attacked with his 3/3 black creatures, and Donnie played another 3/3 Black creature, and Kyle conceded a game that was lost a while before, with a hand filled with cards that apparently "do nothing." 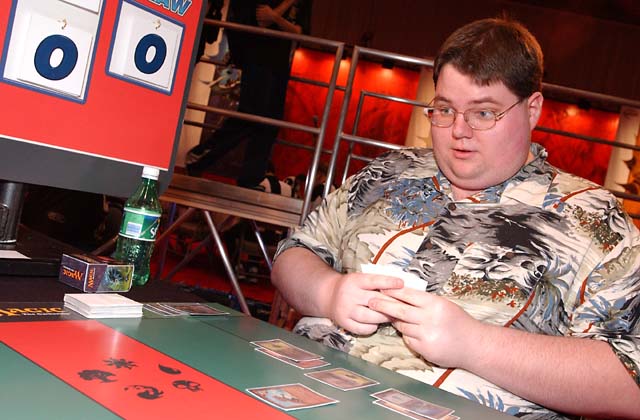 "I don't understand how this deck can ever do nothing," Kyle remarked while sideboarding for game three. Donnie is just happy that he got a game in there, at the worst he won't feel embarrassed when the score goes in. Table talk continues as to what either of them ought to play in the Extended portion the next day, but then the shuffling is done and the fight goes on. Kyle has decided to play first, and he starts with a forest again. Donnie plays swamp and has nothing, while Kyle diversified his mana with Shivan Reef and a Fertile Ground on his forest.

Donnie had an island and Vodalian Zombie, but still doesn't like the looks of that acceleration. On Kyle's next turn he makes two green from his forest, Lay of the Land finds a plains, and then Penumbra Bobcat is played by Kyle. Vodalian Zombie attacks from Donnie's side after he played his mountain, and then Bog Down from Donnie sees Kyle discarding two lands. Penumbra Bobcat goes on the 'o' and the Bobcat is then sacrificed to kick up the Primal Growth, making Kyle's mana base a Fertile Grounded forest, Shivan Reef, and one each of mountain, plains and swamp. Donnie gets to untap and plays his second mountain, and once again he has a turn four Trench Wurm, though this time there is something for it to eat. Kyle passes the turn with no play, and Donnie eats the Reef, then played Sinister Strength on the Vodalian Zombie and attacked.

Kyle used Captain's Maneuver to kill the beast, taking two in the meantime. Kyle's token Bobcat attacked, and Illuminate killed the Trench Wurm, unkicked this time. Donnie dropped a Zombie Boa, bringing more 3/3 beats, and Kyle again had no play other than to say go. Donnie swung with his Boa and played a Thunderscape Familiar, followed by a second Zombie Boa. Plague Spores from Kyle took out the island and Familiar, and the Boas kicked Kyle down to seven life. Kyle played a forest and passed the turn, and Donnie attacked Kyle down to one life with the Zombie Boas, and Kyle ended up packing it up to the army of 3/3 Black creatures, drawing anything but his best cards, even though about ten of his cards could count as his 'best card.'