atrick Chapin is a man who knows his way around a control deck. Between his ingenious designs and tight plays, he can be considered the American Wafo-Tapa before Wafo-Tapa was Wafo-Tapa… if that makes any sense at all. He's piloting an interesting blue-black Mystical Teachings deck that splashes green for Tarmogoyf and white for Beacon of Immortality. 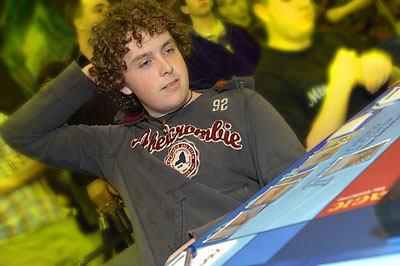 Kyle Sanchez likes to maintain a relaxed demeanor when playing Magic-and most other times, as far as we can tell.

Sitting across from him was impish StarCity writer Kyle Sanchez. Though known as a proficient wizard, Sanchez has earned more renown for his ability to spin a bizarre and intricate yarn behind the computer screen. He has brought a red-white-blue Blink-Touch deck to the table today.

Each competitor had four losses, meaning that the winner would have to win his next two matches for an outside shot of being under the Sunday spotlight. When the topic of making Top 8 came up, Chapin simply quipped, "I'm playing for money… and blood!"

After two turns, Chapin had a few dual lands and a Signet, while Sanchez had a lone Hallowed Fountain-the ill result of his repeated trips to Paris. Chapin played an unimpressive 0/1 Tarmogoyf, but Sanchez got right back in the game on his next turn with a land and an Azorius Signet. The following turn, Sanchez drew yet another land and played a Court Hussar. Chapin, meanwhile, was stuck on his initial three mana sources.

Chapin drew and dropped a Swamp into play in a most deliberate manner. He used his four mana to main-phase a Careful Consideration, discarding Mystical Teachings and Triskelavus. His Tarmogoyf, now swollen to 3/4, began its march into the red zone. Sanchez was still missing red mana, but he mustered an Aethermage's Touch at the end of Chapin's turn and tossed a Bogardan Hellkite into play. The dragon shot Chapin for 5, but Chapin played Slaughter Pact on it before Sanchez could untap.

After the Pact resolved, Chapin put a piece of paper on top of his deck to remind him to pay his upkeep; Sanchez promptly blew on it to make it fly off the deck. Chapin, naturally, was having none of that.

Sanchez hard-cast a Riftwing Cloudskate, which Chapin allowed to resolve. In response to the trigger targeting Chapin's Signet, he played a Mystical Teachings for a Spell Snare. On his turn, Chapin did in fact remember to pay for Slaughter Pact. After another Tarmogoyf beating, life totals stood at 11 apiece. Chapin replayed the Signet.

Sanchez smacked Chapin down to 8 and played another Cloudskate, again bouncing the Signet. Chapin augmented his mana base with a Coalition Relic, the Signet, and a Prismatic Lens, and his Tarmogoyf decided to stay home.

Both Cloudskates entered the red zone for Sanchez. Chapin targeted one with a Slaughter Pact, to which Sanchez responded with Momentary Blink. Chapin attempted Spell Snare, but Sanchez had Remand for the Snare. The Blinked Skate bounced the Relic, and Chapin took 2 from the other Skate. Chapin then replayed the Relic and doubled his life total to 12 with a Beacon of Immortality.

Sanchez flew over for 4 more damage, then played Touch during his own end step, hitting an awkward Lightning Angel. Chapin reloaded with another Careful Consideration, discarding some irrelevant mana sources. Sanchez chumped the now 4/5 Goyf with Hussar, then Chapin cleared the rest of the creatures from play with Damnation. Sanchez dug with a replacement Hussar, finally finding a red source to play a Lightning Angel. The land he found, a Ravnica block dual, put him at 9, and his attack put Chapin at 5.

During his upkeep, Chapin used the long-dormant Academy Ruins to return Triskelavus to the top of his library; he then drew it and tapped everything but his Relic to play it.

A second Lightning Angel hit play, and Sanchez attacked with everyone. Chapin blocked and ate an Angel with Triskelavus and went to 1. He charged the Relic at end of turn, and Sanchez responded by Blinking his Hussar, leaving him with just an Angel and mana in play. During his turn, Chapin flashed back Mystical Teachings for a Tendrils of Corruption. Even without an Urborg in play, the Tendrils was still able to drain the Angel for 6 and put Chapin at 7. Chapin then hit Sanchez to 5 with Trisk. Sanchez found nothing to deal with the inevitable attack and pings, so he scooped up his cards.

The players spent their first several turns developing their mana bases before Kyle broke the "Draw, Go" pattern with Grand Arbiter Augustin IV. Chapin responded with a Mystical Teachings to fetch Careful Consideration. On his turn, he played a one-mana Slaughter Pact on the Arbiter and drew some cards.

Another Arbiter hit play for Sanchez, and it was soon joined by a Court Hussar. Chapin played a 4/5 Tarmogoyf. The creatures took turns going across the table, leaving Sanchez at 14 and Chapin at 13. At the end of Sanchez's turn, Chapin attempted a seven-mana Beacon of Immortality. It was met by a one-mana Remand. Hardly seems fair.

Chapin's Goyf was chumped by Hussar, but Sanchez had a Venser, Shaper Savant to bounce his 1/3. After the dust cleared, Chapin killed Sanchez's legends with a Damnation and played another (bigger) Tarmogoyf. Sanchez rebuilt with a third Grand Arbiter and the Court Hussar. 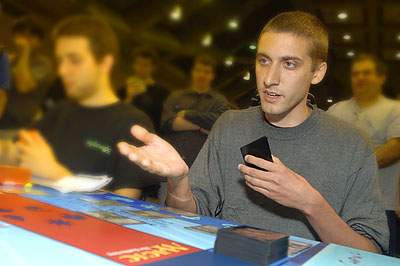 Pat Chapin is no stranger to control decks.

When Chapin crashed in with Tarmogoyf, Sanchez put Hussar in its path. After combat, Chapin flashed back Teachings for another Slaughter Pact, which was aimed at the Arbiter. Sanchez came back with a Lightning Angel to put Chapin to 10, but he fell to 9 from the swing back with the Goyf. Chapin then played another Mystical Teachings for yet another Slaughter Pact, and Sanchez's Angel hit the bin.

The next order of business for Sanchez was a Riftwing Cloudskate, bouncing Tarmogoyf. After the Tarmogoyf re-entered play, Sanchez attempted an Aethermage's Touch. Since his opponents had evidently been hitting quite a bit with these, Chapin decided his best course of action was to play another Mystical Teachings from his hand to fetch a blue Pact of Negation. He then marked the "Pact reminder paper" with a 5 to signify the amount of mana he'd need to pay on his upkeep. Sanchez was duly impressed by this tactic.

Cloudskate hit Chapin to 8, then Sanchez considered the Momentary Blink in his hand. Chapin had way too much blue mana for Sanchez to bounce him down to one source, so Sanchez had to content himself with returning the Goyf.

During his upkeep, Chapin tapped five mana and announced he was paying for his Pact. In the most ominous voice he could muster, Sanchez joked, "You shouldn't have done that…"

Shortly thereafter, time was called, and Sanchez took a moment to muse on his situation aloud: "I have to kill you in three turns… for the draw… and you have a white Beacon in your hand?!" The last few turns of the game indeed seemed like a fool's errand from Sanchez's perspective.

Chapin replayed his Tarmogoyf (again), and Sanchez asked Chapin to guess which two cards were in his hand. With an almost undetectable trace of irony, Chapin happily remarked, "I hope they're both Hellkites!"

Over the next few turns, Sanchez hit Chapin to 6, Chapin doubled up to 12 with his Beacon, and then Tarmogoyf hit Sanchez to 4. Sanchez drew a blank, and Chapin played his fourth copy of Mystical Teachings for the Beacon of Immortality. Sanchez responded by Blinking his Skate again to return Tarmogoyf. Chapin would be unable to win the game before the turns expired, but this was irrelevant, as he had won the first game. As he was in total control, Chapin likely would have won the game in a few more turns regardless.

Pat Chapin 1, Kyle Sanchez 0
Patrick Chapin wins! He'll need two more match wins and quite a bit of luck to make Top 8. Someone managed to sneak into the Top 8 at 10-4 last year, though, so anything is possible.