Round 12: Driving Me Batty

some coverage!" Das Hopper Nikolas Nygaard decided that my appearance at the table was a good time to express his displeasure at not having been featured before now. Nygaard and teammate Rasmus Sibast had more teams fall through than Jack Bauer had kills in 24 last season, which is to say the two lads from northern Europe had some trouble finding teammates that stuck. Just as they were about to give up on the whole thing, Australian ex-pat Oliver Oks arrived, giving them the requisite number of levels to qualify for Charleston. 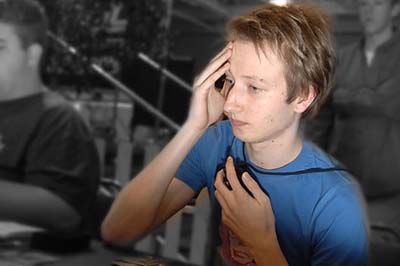 Nygaard finally found a team, and is sitting near the top of the standings.

Their opponents this round feature two-thirds of the team that Top 4'd the last team Pro Tour. Kenji Tsumura may have left his Atlanta squad to replace Masashiro Kuroda on P.S. 2, but Tomoharu Saito and Tomohiro Kaji simply reloaded with one of the hottest Japanese players on the planet: Shouta Yasooka. Kaji explained while they were shuffling that he has not done that well in this tournament. "My record… 3-8." He said, shaking his head in mock remorse. "My teammates…" he noted, waving his hand at Saito and Yasooka, "8-3."

This brought a smile from him, just before he buckled down for a very tough match against the latest in a surprisingly long line of excellent Norwegian Magicians.

Game 1 started out slowly, but Putrefy and Rolling Spoil for Nygaard gave him the early advantage. Kaji used Voidslime to counter a second Spoil, but that opened the door for Nygaard to resolve Loxodon Hierarch. Carven Caryatid let Kaji stabilize, and when Nygaard killed it with a Last Gasp after attacking with the Hierarch, Kaji just shrugged and cast another. This sequence repeated itself a second time, but on the next turn Kaji's creatures got a bit more impressive, as Skeletal Vampire made its presence known.

Angel of Despair allowed Nygaard successfully kill off one token (an interesting choice of targets), but when the batman hits the board, he becomes an absolute bear to deal with unless you draw Putrefy. Or you draw a Vampire of your own, which is what Nygaard did. Just as it looked like the game was in a desperate stalemate, Nygaard sacrificed his Hierarch to put a regeneration shield on his entire team and then cast Punishment for zero, killing all seven of Kaji's bats in one fell swoop - dropping Kaji to nine on the attack.

Remember, however, that Kaji is also a good player (3-8 record in this event not withstanding… somebody has to get the bad deck), and he plucked a second Skeletal Vampire directly off the top of his deck, again slowing the action - though not the play - to a crawl.

At this point in the match, Big Oots Sibast just finished Game 2, putting his team up a match already, while Oks took the lead on Tomoharu Saito 1-0. The game in seat A may have gone on five turns with no action or it might have gone on 20 - it was difficult to tell because Skeletal Vampire mirrors are known to cause ripples in localized time around the table. At some point, Kaji found a Putrefy to get rid of Nygaard's bat maker, and gained a scant advantage in the game. It took a while and a couple more Vampires, but Kaji was able to ride this narrow advantage to a victory in Game 1 simply by driving Nygaard batty. 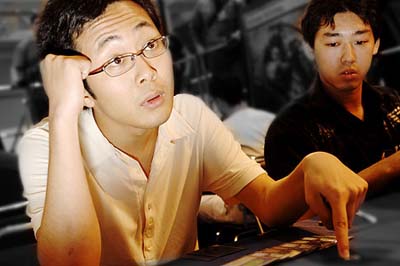 Kaji gets to the point.

Nygaard observed he made a clear mistake in Game 1 where he chose to kill a token with his Angel of Despair, saying that a land would have been a much better choice. He then kicked off Game 2 with another mistake, casting an Orzhov Signet and then laying an untapped Temple Garden before awkwardly realizing that he couldn't cast it with the mana he thought he had. Nygaard's side of the match now felt like a page out of Jeff Cunningham's life instead of the X-3 bracket.

Rolling Spoils began to fly around the table with Nygaard casting three to Kaji's one before Nygaard stole a second one from him with Castigate. Kaji struck back two turns later by transmuting Clutch of the Undercity for Rolling Spoil, and Spoiling Nygaard's Godless Shrine. While Kaji was busily ripping every land he needed while drawing or transmuting for land kill, Nygaard was stuck with a bunch of cards in hand and far fewer board resources than Kaji. Orzhov Basilica was a welcome site for the Hopper, allowing him to put a source of damage on the board a turn later in Loxodon Hierarch. This just gave Kaji a target for his second Mimeofacture, the first of which had stolen Overgrown Tomb.

Meanwhile over in the players' lounge, the crowd had gotten very rowdy after a pair of goals in the USA-Italy game from the World Cup.

Kaji was very busy denying Nygaard any worthwhile resources, and finally Simic Sky Swallower hit the table for the Japanese player, giving him a very large clock, and knowing Nygaard had practically no ways to deal with it. Oks had just lost down in the C seat, and Nygaard was not far behind, giving Kajiharu80 the match 2-1.