Round 12: Eugeny Okin vs. Helmut Summersberger 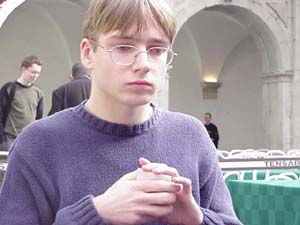 The Russian kicked off with a Duress grabbing a Swords to Plowshares over two Powder Kegs. He followed that with a River Boa and a Call of the Herd. Helmut used a Brainstorm to find an answer.

He had to settle for using a Keg on the token. Since he tapped out for that Eugeny took the chance to Duress again taking Powder Keg over Counterspell, Accumulated Knowledge and Fire&Ice.

The Boa was still ticking and Summersberger was digging as deep as he could for an answer. He Wastelanded a Treetop and Okin again used an opening to drop Pernicious Deed, even at the risk of losing the Boa if Helmut could find red mana.

Sure enough the German found a Volcanic Island and Fired the island-walking terror away from the table. The only non-land permanent on the table now was a Deed. But again he had to tap out so Okin played a Gerrard's Verdict getting two lands.

A Flashbacked token showed up but Helmut had the Keg for it. He even had the counter for the next threat: Mystic Enforcer. Things would look a lot better for the German if Eugeny would just stop playing spells! A Spectral Lynx slipped through but Helmut managed to stop the second attempt to summon and Enforcer.

The Lynx looked like it might go all the way until Summersberger hardcasted his Hydra. Since Okin was mostly tapped out two shots were enough to get rid of the monster.

As in the rest of the game so far Okin was not to be outdone and again seized the opportunity. He Sworded away the Hydra and attacked with the Village. Helmut returned the favor by Swording the land and Eugeny dropped a Seal of Cleansing that got a big scowl from the German.

At this point the pace of the game was amazing with both players going at full speed. Helmut's Treetop was now the only attacking permanent (doing it with ease since the Deed was long gone) but Eugeny's life was still way over twenty.

During the next turns the only sounds we heard were "draw, go" and the Treetop Village's red zone bites. A Lynx got countered on the way and suddenly Helmut stopped attacking to recur Gaea's Blessing and Accumulated Knowledge.

He eventually stopped that when he found his Morphling. Eugeny tried to Vindicate it but as Helmut tapped his last land to protected it the Russian reached for his sideboard.

A Wasteland on the second turn almost sealed the game. The Ukrainian used a Wasteland to destroy Helmut's first land, a Tundra.

His following Duress revealed his Wasteland had worked: Helmut only had one remaining land in hand. He also had two Oaths, a Force (which Eugeny) took, Hydra and a few other spells.

A Choke and a Call of the Herd later, with only two Volcanic Islands on the table Summersberger picked up his cards. He needed green mana, which he never saw, to recover and losing the Force had allowed the crucial Choke to resolve.

Okin took a mulligan and lost his first two lands, Treetops, to Wastelands. Summersberger's revenge didn't pay off as Eugeny kept dropping lands eventually playing a Seal of Cleansing after Helmut recycled the Wastelands with a Blessing.

Still an Oath came into play. Eugeny hesitated about which permanent to blow with a Vindicate but finally settled on a Flood Plains hoping to catch Helmut with mana problems once again.

The Seal blew the Oath and a River Boa came into play. As Summersberger continued to miss land drops it looked like the Boa might go all the way. Okin added a Call token to his army while a flurry of card drawing spells finally gave his opponent some extra lands. 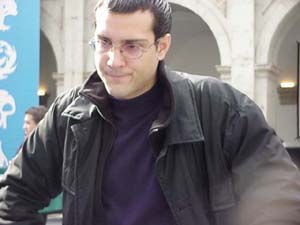 A Swords sent the Boa away but the elephant kept ticking away, along with his flashbacked brother. Summersberger used an Intuition for Powder Keg on his upkeep. That not only improve his chances of drawing land, which he didn't, but it also gave him a future answer to the token duo.

He took another hit down to nine, Forced a River Boa and kegged away the tokens. Obviously Eugeny would not sit idly watching the game slip away. He played another elephant hoping to pack things up but Helmut had an Oath.

The Ukrainian opened way for a Seal of Cleansing - which still got countered - with a Gerrard's Verdict that got the Morphling. The Oath coughed up the Hydra and it looked like Helmut Summersberger had survived the initial blitz.

A Flashbacked Elephant allowed the Oath to shuffle the graveyard back in again since the only two creatures in the deck were in the graveyard: Ancient Hydra and Morphling.

The last swing of the Elephant brought Helmut down to two and when he countered a Spectral Lynx he had a good chance of winning the game. He Oathed up the Morphling and even Okin played the first Diabolic Edict he animated and sacrificed his Treetop Village.

But the cool Russian was more than ready. He had a second Diabolic Edict. Out went another Village as Helmut struggled to keep his Superman alive.

The German extended his hand and conceded.