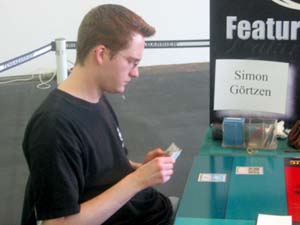 , these two are certainly not used to the Feature Match playmat. Comparing it to Pokémon didn't help. They are virtually unknown as far as premier events go but right now they are very much in the hunt for this Grand Prix Top 8. And that is all that counts.

Gortzen didn't start things on the right foot. He had to mulligan. He played Viridian Longbow and a Myr. Schatz promptly Bolted the Myr, hoping to screw Simon's mana. He did miss his third land drop but had another Myr.

Schatz played Spikeshot Goblin - eliciting an unhappy response from Gortzen. He did find his this land and played Leonin Den-Guard so his mana woes weren't as serious when Schatz shot the Myr away.

Ignoring all the mana destruction Simon Gortzen played his fourth land and gave the Den-Guard a Longbow. It wasn't much but it helped him experience the Red Zone for the first time. Markus played Goblin War Wagon and Gortzen answered with Cathodion.

Shatter got rid of that and the War Wagon dragged Gortzen to thirteen. Simon needed some extra fuel to balance this out. He tapped out to play Mind's Eye hoping the extra cards woul help him out. Sensing the danger ahead Markus pressed on.

Detonate took the Longbow away and two Tooth of Chiss-Goria helped bring Gortzen down to seven. Simon untapped, drew his card and conceded. He never got a chance to use his Mind's Eye.

He followed that with Crystal Shard and since Markus Schatz had no creatures in play things seemed totally under control. On the following turns Abunas started grabbing equipment and destroying Markus life total.

Two turns later Markus revealed his hand full of lands and conceded. Throughout the whole game he drew three spells. Mana flood isn't the perfect answer to an Abunas.

Again Simon had Viridian Longbow and Leonin Den-Guard to start the game. But this time Markus was ready for it. He played second turn Myr and third turn Crystal Shard. Gortzen sighed.

Back came Den-Guard and Skyhunter Cub followed. The Shard worked twice and the Cub bounced right back to Simon's hand. Still, despite all his trickery Schatz seemed again flooded playing land after land but no extra creatures.

Across the table Simon Gortzen wasn't missing any land drops. Soon he had seven mana and three creatures. He was almost out of the Shard's grasp (at least until they started using the Red Zone). Schatz activated his Stalking Stones and gave it Leonin Scimitar. He then had to save his Myr from a Longbow shot.

He killed one of the Longbows with a Shatter on the next turn but Gortzen had another one. Eventually the little Myr died. Still his Crystal Shard and Stalking Stones seemed a small match for Simon's side of the table.

To even things out Schatz played Sword of Kaldra. Gortzen was far from happy. He shook his head, sighed and pounded his deck demanding some help. Down by five life he would be facing a huge monster on the next turn.

He played Banshee's Blade and gave it to his Skyhunter Cub. A almost full-team strike brought Markus down to eleven. Schatz played a Krark-Clan Grunt and let it have the legendary sword. That gave him two big creatures to slow Simon Gortzen down. 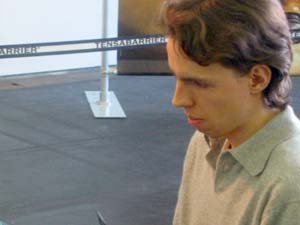 Only problem he had right now was the flying Skyhunter Cub. His opponent kindly reminded him of it by attacking with it on the following turn. Schatz stumbled down to six. On the following turn he sent the whole crew in. Gortzen buried his head in his hands and began the blocking dance.

When he finished, Schatz had to bounce his Stalking Stones back to his hand to save them. Not the most cost-effective process of keeping your creature alive. Altar's Light got rid of the Grunt-Sword team and suddenly Markus Schatz impressive army... was totally gone.

Gortzen smiled and sent his crew in. Schatz activated his Stalking Stones but it wasn't enough. Between the Cub and the Den-Guard carrying Viridian Longbow Simon Gortzen had exactly enough damage to finish him off.