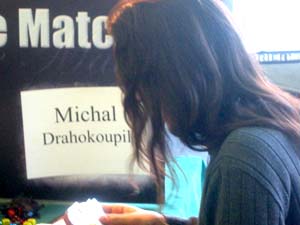 we covered the draft of the second pod and it was predicted that local amateur Hannes Scholz would 3-0 his draft with his affinity deck. So far he's been confirming the facts, having won both of his matches. His opponent, Michal Drahokoupil left the draft table with a less spectacular green-black-red deck, and few expected him to be playing for the victory in the draft, but it has served him well, since it has shortened the distance to the Top 8.

Hannes choose to play first, and he sure did it in style. On his 3rd turn he tapped his Ancient Den, Seat of the Synod, Gold Myr and Island to play a Myr Enforcer. Michal just lays his land number three and passes. Hannes attacks with his Myr Enforcer and Gold Myr and plays another affinity creature, Somber Hoverguard. Michal finally made his first move with a Moriok Scavenger returning nothing.

The Enforcer and the Hoverguard attacked and left Michal at a precarious 8 after just a few rounds. Michal, just untaped and passed the turn. He really needed a trick to continue the game for a bit longer. Hannes had to attack and after blockers, a Predator's Strike and a Terror on the Hoverguard left Hannes with nothing but lands and Myrs.

The game was turned to Michal's side. He played Tel-Jilad Archers and began attacking with the Moriok. Hannes was clearly out of gas and had no more creatures. Michal attacked with both the Archers and the Moriok, but the archer met a Soul Nova. That was really important, because of the Archer's ability to block flyers. Michal controlled the ground, but had no ways to prevent an aerial attack. An Icy Manipulator still gave him a few turns tapping a Broodstar, but Hannes found a pair of flyiers and they were on to the second game.

Michal opted to start, trying to delay for 1 turn the affinity deck and meanwhile build his attack forces. Nevertheless, the first play was from Hannes: a Gold Myr from a Seat of Synod and a Vault of Whispers threatening another turn 3 Enforcer.

Michal: "I noticed how you picked all those Enforcers during the draft."

Michal played a Yotian Soldier and passed. Hannes didn't have an Enforcer but played 2 more Myrs, that could bring a huge Broodstar into play soon after. The next turn, he played Vulshok Gauntlets, equipped one of the Myr, attacked, and payed one blue for a Somber Hoverguard.

But Michal had the perfect answer for the Gauntlets - Icy Manipulator. Hannes just gained control of his opponent's Yotian Soldier to clear the way for his Myrs to attack. Michal had the solution for the Domineer with his Elf Replica, but it was countered with Annul. Hannes attacked with his Myrs and played an Enforcer for free. It attacked once, but Michal played an Ogre Leadfoot and a Bottle Gnomes, which caused the Enforcer to stay back. Once again, the ground was stalled, which should've favored Hannes flyers.

A Copperheaf Vorrac from Michal was a lot bigger than the Myrs and Yotian Soldier, but Hannes responded the big Vorrac with a huge flying Broodstar 10/10. The Broodstar didn't kill Michal because he still had the Icy Manipulator. But that freed the other flyer from Hannes. He drew a Bonesplitter to end it more quickly.