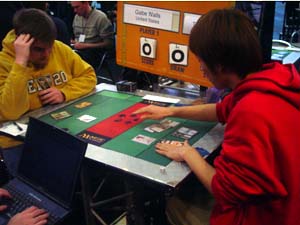 of these players are on the bubble for Top 8- one more loss, and they don't play tomorrow. To say that Walls isn't confident would be a bit of an understatement.

Walls- "He's got three Spikeshot Goblins and I've got three Molten Rains, so it's evenly matched."

Oosawa played Viridian Longbow, and a second turn Talisman of Indulgence. Walls mockingly asked him to play Spikeshot Goblin, but got Neurok Spy instead. Walls drew, sighed, and entered his discard step. "So lucky, you Japanese!" The Spy attacked for two, and Oosawa's Nuisance Engine got a sarcastic whistle out of Walls. A third land finally showed up, and Walls used it to play Goblin Replica. With a token and six lands, however, Oosawa was able to pass the Longbow and shoot it down. Walls made a Vulshok Berserker and attacked for three, but it too died to the Longbow. Oosawa's Nim Shrieker came out as a 3/1, and Walls summoned Goblin War Wagon. The Shrieker and Spy attacked for five points of evasion damage, and Oosawa played a second Spy. This was enough to convince Walls to concede.

Me- "Are they (the three Molten Rains) coming out?"
Walls- "No, not a chance. I've got nothing to bring in, not gonna lie." 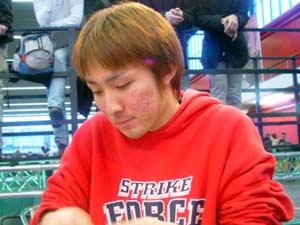 Once again, Oosawa had a first turn Longbow. He played a second turn Alpha Myr, and Walls played Molten Rain on an island. He did the same on the following turn on a mountain, and when Oosawa missed a land drop, Walls laughed maniacally. The third Molten Rain in a row left Oosawa with no lands, and Walls had no problem announcing it to the world. With Oosawa's mana crippled and Walls playing threats every turn, Oosawa conceded.

Walls- "I ripped a mountain turn three, by the way."

Oosawa had a second turn Silver Myr, and a third turn Nim Shrieker. Walls drew, laughed, and used Molten Rain to destroy Oosawa's only swamp. He still played another mountain, brought out Nim Replica and a Longbow, which was Turned to Dust. Walls summoned a Berserker and attacked for three, so Oosawa swung back with his team for six. Walls drew, played Pyrite Spellbomb, and then a potentially devastating Krark-Clan Shaman, which got a frustrated grunt out of Oosawa. 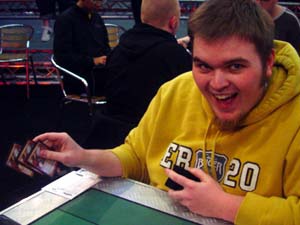 The Spellbomb killed the Shrieker, and with the help of some black mana from Chromatic Sphere, Oosawa played another. Walls played a second Berserker and sent both into the Red Zone. Since he was lacking an artifact for the Shaman, Nim Replica blocked and traded with one. Oosawa played a Cobalt Golem, which let his Shrieker attack for two. He chose not to block the Berserker, going down to eight, and Walls played Ogre Leadfoot. Frogmite made the Shrieker a bit bigger, letting it attack along with the Golem through the air for five, bringing Walls down to three. Walls attacked with the Leadfoot and Berserker, and at eight life, Oosawa had a hard decision to make. After some thought, he blocked with the Frogmite to trade with the Berserker. Facing a lethal flying attack next turn, Walls conceded.