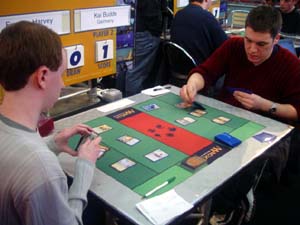 hard not to get excited when two giants of the game sit down to battle. Harvey's resume might not be the world-shaker that Budde's is, but really, it'll be a while before anyone measures up. Even still, the soft-spoken CMU'er is universally seen as one of the game's best. The two shuffled and talked about the tournament so far.

"I've paris'ed maybe once yesterday, and it was the same with all my opponents. It seems like you don't have to mulligan a lot in this format, between Spellbombs and Myrs." - Kai Budde

Budde opened with Auriok Transfixer, and on the following turn got in for three thanks to Bonesplitter. Harvey's swamp and island weren't doing him any favors. Budde hit for three more, then added Serum Tank. Harvey stalled on two lands and Terrored the Transfixer. A turn later he had to discard.

Budde spent a turn drawing off his tank then dropped Soldier Replica, announcing "The beats." Raise the Alarm followed and Harvey's life total was falling. By the time Harvey got a third land, Budde was all over him. Nim Lasher was slim defense.

That was enough to earn the scoop.

Budde's start was less boisterous in the second game. He had a first-turn Transfixer, but nothing to back it up. Harvey dropped a second-turn Glimmervoid and Sun Droplet. Then came Neurok Spy. Budde could only manage a Serum Tank. And what better weapon for the Spy than Loxodon Warhammer? 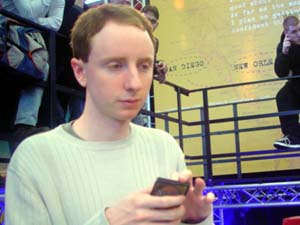 Budde quickly got a Soldier Replica on board but had to wait a turn for the mana to activate it. He fell to thirteen. As if in anticipation of this, Harvey's next play was Slagwurm Armor. He didn't have enough mana to get in with it right away, though. Budde drew a card off his Serum tank, untapped, and thought.

Finally he chose to draw a card off his Tank, but it was no help. Even with five land in play and a big grip he couldn't stop the Spy on the next turn. Harvey hit him again. Budde Raised the Alarm, but that wasn't going to solve his problems. He hit back for four and made a Transfixer. Blinding Beam spared him two turns of Spy damage. Harvey added Quicksilver Elemental to his team.

Budde's next play was Leonin Sun Standard. Suddenly his army of 1/1's was much more threatening. He gave it back to Harvey. Harvey moved his hammer over to the Elemental and traded it in combat with Budde's Replica and token. Harvey ended his turn. Budde hit back for some damage, but Harvey's Sun Droplet was negating it. Budde drew more cards but none could deal with the Spy who shortly took back his Warhammer. Two hits, and Budde was dead.

Harvey had to mulligan, and Budde made a sympathetic sound. His six were worth keeping.

Budde blazed out with Transfixer and then Riase the Alarm. However, he was stuck on two lands. He played Leonin Sun Standard.

Harvey called for Wail of the Nim, but it didn't come. Instead he had a Wizard Replica. Budde did not attack, signalling the second Raise in his hand. Harvey played a Somber Hoverguard, but it was on defense. Budde smashed in and pumped his team, bringing Harvey to ten. 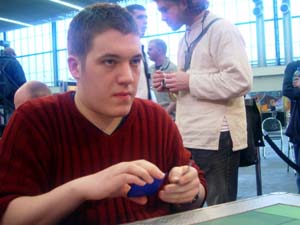 Harvey tried a Myr Enforcer, but Budde pulled up his third land and dropped Arrest on it. Harvey played out Neurok Spy and Nim Lasher. Unfortunately for him, Budde peeled a fourth land, earning a gasp from the crowd. His men charged, Harvey doubled up with Spy and Replica on one, and blocked another with Lasher, leaving the Replica and losing two tokens. He made a Gold Myr with his leftover mana.

Harvey got in with a second Enforcer, but Budde was content to just wait to get enough men on the board and swarm. After he made a Soldier Replica, that was enough.