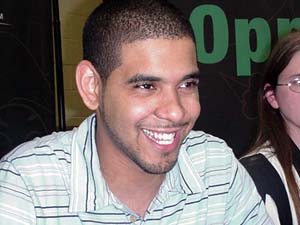 David Williams has a number of tournament successes, most notably in team events, where he has two team Grand Prix wins. He is currently teaming with Bob Maher and Neil Reeves, and is trying to pick up a couple of pro points today to get invitations to the next individual Pro Tours. Jonathan Becker has been playing tournament Magic basically since its inception, and was a member of Tongo Nation, one of the first teams of Magic pros. He is also known for his internet writings. Dave and Jon chatted a bit about playing in the feature match area - both seemed to prefer normal matches to ones in the spotlight, but neither seemed particularly uncomfortable.

Dave won the die roll and chose to play. The first few turns saw only land, with Dave playing two Swamps and Jon an Island and a Mountain before playing a Specter's Shroud. Dave came back with a Seat of the Synod and a Chittering Rats. Jon just redrew his card and played an Island.

Dave entered the red zone with his Rats before playing a Great Furnace and a three-mana Dross Golem. Jon just played a Mountain and said go, but when Dave attacked again, a Needlebug jumped out of Jon's hand to ambush the Dross Golem. Dave also played an Arcbound Bruiser, then passed the turn.

Jon played a Neurok Spy and equipped it with the Specter's Shroud. Dave wasn't finished attacking, though, and he played a Whispersilk Cloak, equipped the Bruiser, and attacked with both of his creatures. Jon declined to block the Rats, falling to eleven. He finally dealt damage to Dave on his turn, attacking for five and watching Dave discard a Dross Golem before playing a Looming Hoverguard. The Hoverguard sent the Whispersilk Cloak back to the top of Dave's library, and Jon gave the turn back to Dave.

Dave had to think. He had two cards in hand, the Cloak and one other, and finally chose to replay the Cloak and attack with an unblockable Bruiser. He lost the other card in his hand, a Nightmare Lash, when Jon attacked with the Spy and the Hoverguard, knocking him down to nine. Jon also played another Spy.

Dave attacked again with the Bruiser, but when he picked up his pen to mark Jon's life down, Jon stopped him with an upheld finger and, "Gotta think about it." Jon decided to Echoing Truth the Whispersilk Cloak and block with his Needlebug, and now Dave had to make a choice again of which card to play. He decided to play his Nim Shambler instead of replaying the Cloak, and said go. Jon attacked with both Spies to put Dave at four and strip the Cloak from his hand, and Dave drew once more before scooping.

The chatter between games was about the Needlebug. "Many like him. Many more dislike him," Jon said. Both players sided a bit, and Dave chose to play for game 2. The game did not start well, though, as he mulliganed a one-land hand into a no-land hand, finally keeping five cards. Jon also mulliganed once, but seemed happier about it than Dave.

Dave led with a Swamp, answered by Jon's Mountain. Dave followed up with a Great Furnace, and Jon wasted no time in playing an Island and using Echoing Ruin on the Furnace. Dave could only shake his head, saying, "Cute." He drew and passed the turn without a land drop. Jon was able to play another Mountain, an Island and an Arcane Spyglass before Dave found a second Swamp.

Jon played another Island, a Lifespark Spellbomb and a Somber Hoverguard. The Hoverguard, at least, Dave could deal with, as Terror sent it to the graveyard. Dave missed another two land drops, though, and watched as Jon drew a card with the Spellbomb, played a Needlebug, and then drew with the Spyglass and played a Leaden Myr. 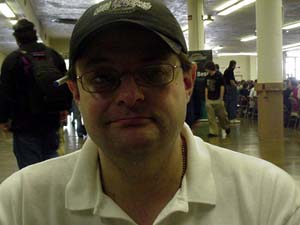 Dave found a third Swamp for a Chittering Rats, but Jon was unfazed, drawing another card with the Spyglass and dropping a Myr Enforcer. A fourth Swamp from Dave enabled both Whispersilk Cloak and Dross Golem, but Jon sent the Golem back to Dave's library with a Looming Hoverguard. His attack took Dave to fourteen.

Dave tried to make a go of it by replaying the Golem and equipping it, but he was too far behind. Jon drew two cards with the Spyglass, hit Dave to seven with the Enforcer and the Hoverguard, and played a Neurok Spy. Dave didn't even bother drawing his next card before conceding.

1 Contaminated Bond 2 Hunger of the Nim