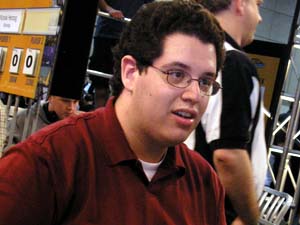 is Mike Turian's last Pro Tour. Don't even try to tell him to stick around for Worlds. He's having none of it. He's even going to be in Seattle for the Pro Tour, but won't be competing. He's currently working on going out with a bang, sitting at a very strong 10-2 record. Sitting opposite him is the mighty Anton Jonsson, who would be due for another Top 8 if he hadn't just gotten one at Pro Tour - Amsterdam.

Turian's quick start of Transfixer and Copper Myr was shut down by Jonsson's turn-two Leonin Den-Guard. He missed his third land drop and added a Pteron Ghost and Viridian Longbow to the table. Jonsson seized on the opportunity and Arrested Turian's Myr. But today was a good day for The Potato, and he pulled a plains off the top. He equipped his Transfixer and flew over with the Ghost for damage.

Jonsson dropped a Leonin Battlemage into play, but Turian was about to make his life very difficult. Another land off the top, and then the Sword of Kaldra. Jonsson slumped.

He attacked again and made some guys, then watched as Turian's Transfixer picked up the Sword and shot down the Battlemage. Jonsson hit with Frogmite and Den-Guard then summoned a Razor Golem and a Pteron Ghost, but the farce wouldn't last long. He picked up his cards after another draw.

Jonsson's deck did what it was supposed to do in the second game. Turn one Auriok Glaivemaster, turn two Bonesplitter, equip, bash for four.

He had only a Leonin Elder in play, and nothing to do on his second turn. That meant another four to the grille. Jonsson played a Great Furnace, giving Turian one life, and then a Pteron Ghost. Turian Raised the Alarm at end of turn, then untapped and slammed down an Arrest on Glaivemaster. Jonsson moved his axe over and hit for three, then stopped Turian's 1/1 with Frogmite.

Turian brought out Vulshok Morningstar and got in for three. Jonsson made himself a Duskworker. Turian continued the pain with Vulshok Gauntlets for his Elder and smashed in. Jonsson took it all, falling to five. He untapped and Arrested the token and got back for some damage of his own, putting Turian within range of a lethal attack.

Little did he suspect that Turian was holding Fireball, and just needed to peel a land to take the game. He didn't get it. He moved his Morningstar onto his untapped token, then played Wirefly Hive, tapping out. His Elder put him to a very important six life. Jonsson could only do five. He moved the axe to his Duskworker, forcing Turian to throw away his token and dropping him to three. He added an Alpha Myr to his team, putting Turian to four.

Turian drew … Sword of Kaldra. He bluffed a trick, hoping Jonsson would blow his attack, but he did not.

Jonsson led of with Leonin Elder, prompting a chuckle from Turian.

Turian played a Morningstar, and after Jonsson dropped a Den-Guard, a three-mana Razor Golem. Jonsson brought out a Bonesplitter and got in for four while the getting was good. Turian returned the favor for five and added a Copper Myr. Jonsson was ready, though, and Arrested the Razor Golem to take control.

Turian brought out his Taj-Nar Swordsmith and fetched Viridian Longbow before taking another four from the Den-Guard. Jonsson kept the pressure up with a Razor Golem of his own. Turian tried to hold the ground with Vulshok Gauntlets on his Swordsmith, but Jonsson moved the 'Splitter to his Golem and played a Pteron Ghost, so it could tangle with the Swordsmith and survive. He swung. Turian fell to one. Turian calmly moved his bow onto his Myr and gave it back.

Jonsson dropped a Duskworker and swung all out. Turian flipped up a sideboarded Echoing Calm, shocking a nearby Kai Budde.

"Was that Echoing Calm?" - Kai Budde 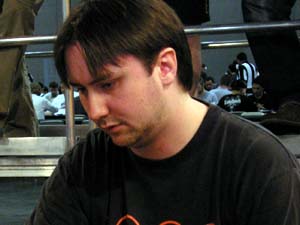 The freed Golem and big Swordsmith took care of business. Turian had to lose his Bowed-up Myr, but Jonsson lost his Ghost, Den-Guard and Elder. It was devastating. Worse for Jonsson, the Golem picked up the Gauntlets and started hitting for nine. Jonsson thought hard. He put the Splitter on Duskworker and swung with both his men. He lost his Razor Golem but took care of the Swordsmith. His Frogmite came on board and took the axe.

Another Golem hit took Jonsson to five. Turian played Loxodon Mystic. Skyhunter Cub was a turn too late. Another turn, and the match was Turian's.