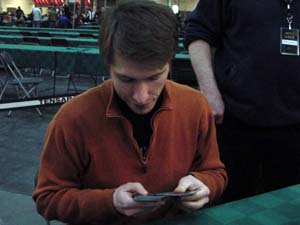 last time I saw Lubos, he was the head judge at Grand Prix Copenhagen. Apparently, he can play as well: he is 9-2, and still in contention for the top 8. Antoine probably is the better player, but he claims to be a judge as well, although to my knowledge he never was anywhere near head-judging a premier event.

Antoine started the game in true Boros fashion, with an early War-Torch Goblin, and the guild's signature common, Skyknight Legionnaire. However, he had quite a few green cards as well.

Lubos had a Golgari deck, with a hint of white. His early creatures were Centaur Safeguard and Dimir House Guard, and the two players started to trade a little damage. At some point, Antoine sacrificed his Transluminant, as his plan was to use Cleansing Beam on Lubos' Safeguard. When he realized that his Legionnaire would die from that as well, he took it back, and instead just blocked with his newly acquired spirit token. It looked really bad for Antoine, but he topdecked a Rally the Righteous and could deal the last damage just before he died.

Game 2 was a lot less interesting, as Lubos was stuck on two mana, and Antoine's weenies just got to hit him unopposed.