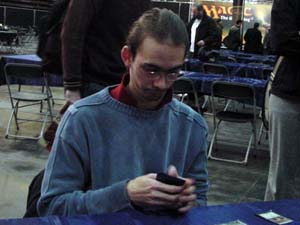 round 12, and again two players with X-2 records are in the feature match area. Julien is the current French champion, and had some solid results on the Pro Tour circuit in 2005. Jeroen was Dutch champion in 2004, is a Pro Tour champion, but had a rough season in 2005, where he even dropped to level three in the Pro Players Club. Maybe this is his opportunity to come back with a good finish.

It seems like Jeroen drafted a five-colour deck this time, as Dimir Aqueduct replaces a Plains on turn 3 with a Forest and a Mountain already in play. His two-drop: Vinelasher Kudzu. The Kudzu never misses out on a counter in this game, and is dealing first 3, then 4 and then 5 damage to Julien. Golgari Rotwurm is Jeroen's next threat, alongside two Selesnya Evangels.
Julien is still in this game though, a turn 3 Fangtail and a Firemane Angel keep things quite balanced. The Angel attacks a few times, and Vinelasher Kudzu gets sacrificed in response to Boros-Fury Shield. Now that Jeroen is no longer attacking, Julien starts shooting Remie each turn as well. Tattered Drake might be an answer to Firemane Angel, but Sparkmage Apprentice in combination with the Fangtail clear the way for a lethal attack. 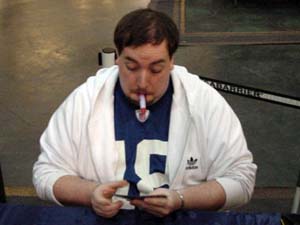 Turn 2 Vinelasher Kuzdu again in this game, however that Kuzdu is the only spell Jeroen played this game. His opening hand of two Forests, Kudzu, and four non-green spells does not get any help in the next few draw steps. A mulligan would probably be appropriate as the Kudzu is not much a threat himself with only two lands available. Julien once again comes up with Viashino Fangtail and Indentured Oaf, and does not have any issues in winning this game.