With 27 points respectively, the teams of Robbie Ferguson, Marek Pieprzyk and Roy Raftery as well as Christoph Huber, Manuel Bucher and Michel Casanova definitely need another two wins to advance to the knock out portion of today's competition. We had the following matches: 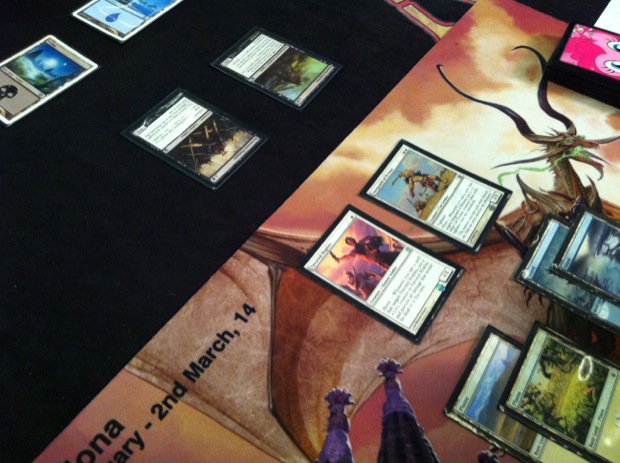 The first match was over in a hurry; Casanova pulled ahead with his white creatures coupled with a few enchantments before Raftery could find something to stop the opposing forces.

His teammate Manuel Bucher on the other hand was standing with his back against the wall. His opponent Marek Pieprzyk was playing a very aggressive R/U deck and his field sported Rageblood Shaman, Borderland Minotaur and Kragma Butcher.

Bucher's creatures were simply too weak to simply stand a chance and he had to block his opponent's creatures several times with more than one of his own, which meant that he was losing board position and fast!

Two copies of Griptide didn't help either, further delaying the seemingly inevitable, especially since Pieprzyk found a Bolf of Keranos to take out another blocker. A turn later, Bucher started accessing his sideboard. 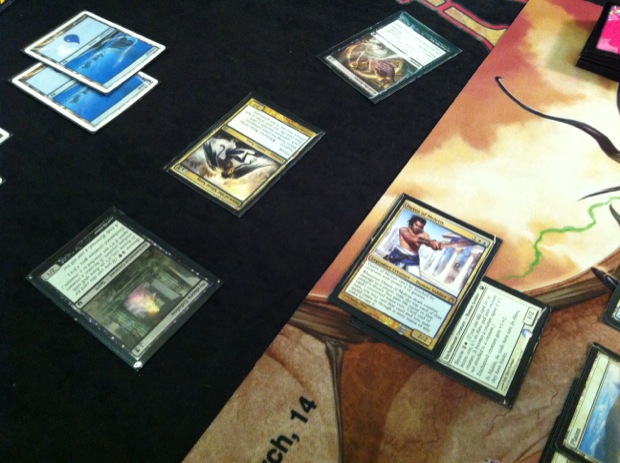 Back to the first table, where Casanova's Daxos of Meletis dominated the game ever since it hit play and more so since Casanova cast an enchantment on it.

Raftery bought himself a lot of time with Lash of the Whip to take out another of Casanova's creatures, but eventually, the advantage generated by Daxos started to add up, proving to be a bit too much for Raftery.

That only seemed to change when a Keepsake Gorgon stopped Daxos for once and when he foundErebos's Emissary the following turn to enchant Siren of the Silent Song, it appeared like Raftery could eventually turn this around.

That was before Casanova cast two copies of Sudden Storm over the course of the following two turns, each time forcing his opponent to make unfavorable blocks to stop Daxos.

Raftery found yet another potential blocker, but a Retraction Helix took it out of the equasion for the time being, so Daxos could continue to do his dirty work. When Casanova found another another enchantment for it, he added insult to injury and Raftery immediately started to shuffle up and rearrange his chair so he could help his teammates. 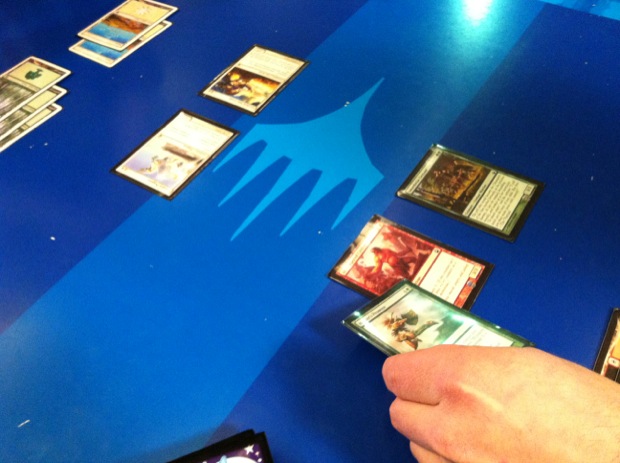 Hunter's Prowess gave Christoph Huber exactly what he needed to leave his opponent with just 7 life. This was too much of a damage swing it appeared since Ferguson shuffled up shortly afterwards.

On the second table, it was Pieprzyk once again who was sitting in the driver's seat. This time, Bucher even needed three creatures to block an enchanted  and he ended up losing two of them. 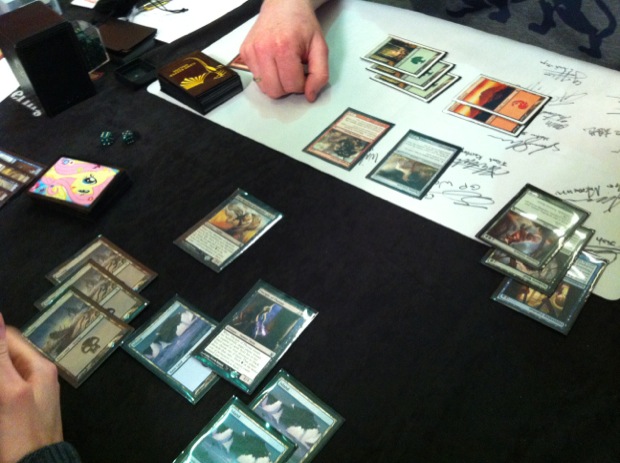 Bucher tried to hang in there with Gray Merchant of Asphodel and a Disciple of Phenax, but a  that enchanted Kragma Butcher put Pieprzyk even further ahead. In a desperate effort, Bucher was forced to block the Kragma Butcher with three creatures of his own and he was left with only one after the dust had settled.

Pieprzyk then added Disciple of Phenax and Vulpine Goliath and if it weren't for a much-needed and timely , that would have meant the end of the match. Still, Pieprzyk continued to bring the beatdown, inviting Snake of the Golden Grove to his party. It attacked unopposed the following turns and Bucher started to look at the table of his teammate Huber more and more frequently, indicating that he himself wasn't feeling too confident he could turn this around.

When his deck didn't provide him with an out, he immediately extended the hand. 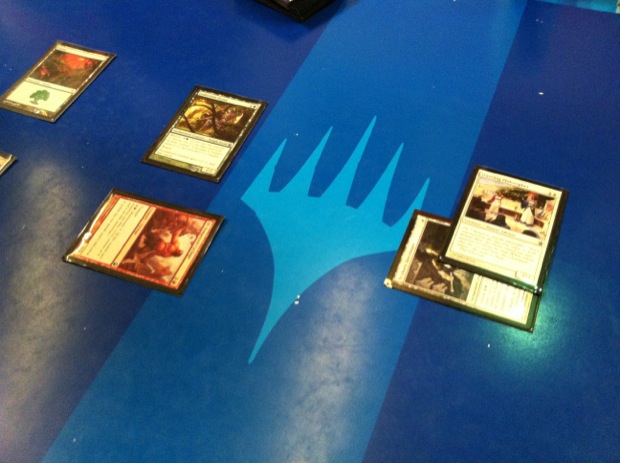 Ferguson was far ahead in the second game, thanks to a Traveling Philosopher that was enchanted byNyxborn Shieldmate. He added Lagonna-Band Elder to pull even further ahead.

Huber thought that Nessian Asp could help him out, but thanks to a Mortal's Ardor, Ferguson improved his position even more. He was now up to 27 life while Huber was only left with 7. 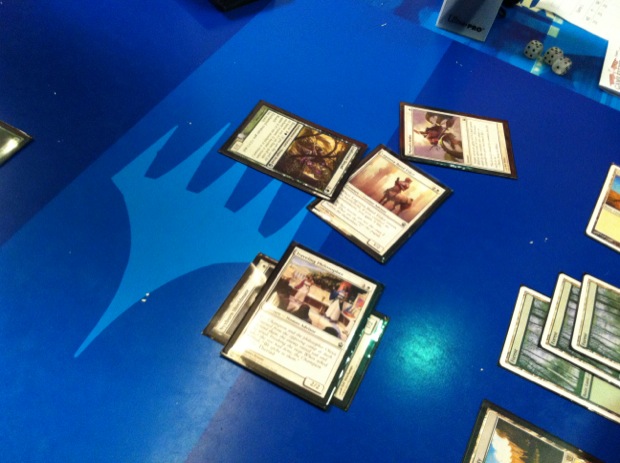 The following turn, Ferguson attacked with both of his creatures and he thought that a Dauntless Onslaught would be enough to allow for some favorable trades. However, Huber now had enough mana to trigger the effect of Ill-Tempered Cyclops, making sure he would get to keep this big threat while Ferguson lost his attacker. 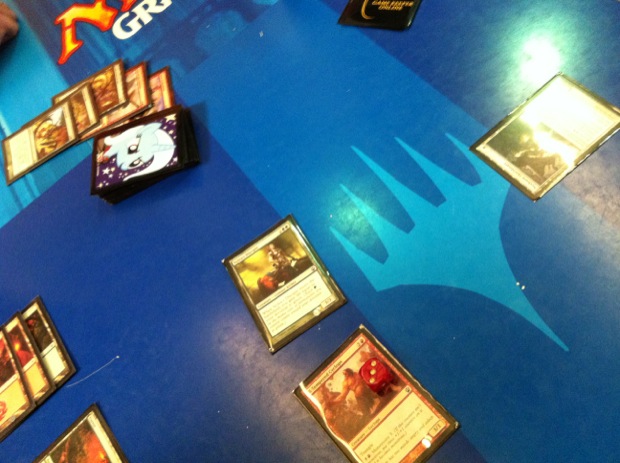 After that, Huber used Nylea's Disciple to give himself a little more breathing room. A Time to Feed then took out his opponent's largest threat while Huber continued to attack. Ferguson tried to hang in there with Pheres-Band Tromper, but when Huber revealed a Pinnacle of Rage on his following turn, Ferguson knew it was over and he extended the hand.

A great comeback for Christoph Huber on the first table in the second game where he didn't lose his calm despite a big difference in life totals. Step by step, he started to turn things around, eventually leading his team to victory in this crucial match!