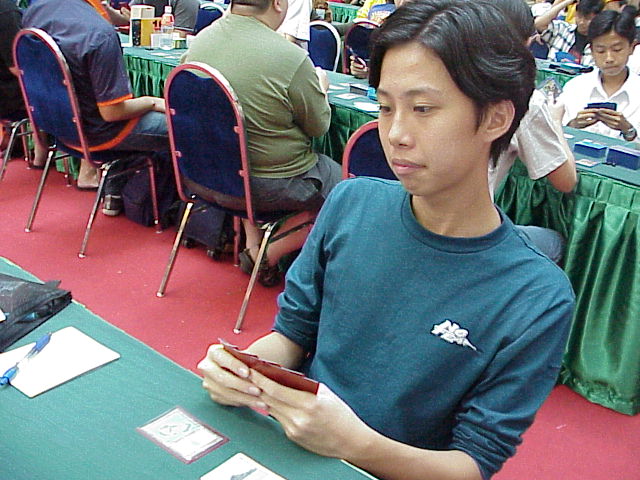 Two youngsters, Albertus Law and Ang Jun Yang, faced off in round 12. With only a single Swiss round left to determine the Top 8 these two players had a very narrow shot to make it - they would have to win their last two rounds to have a chance. Law, 19, is a university student studying at one of Singapore's fine Technical Universities. His opponent, Ang Jun Yang is a bit younger, at 17; he is still in secondary school. Their matchup was a classic combo vs. control, with Law sporting a strong version of the Trix deck, while Yang played a multicolor Oath deck. Yang would need to stabilize the early game, fighting through the disruption and countermagic to stop the key card Necropotence.

Yang played first and Law started off with a second turn Duress. Yang was able to use Brainstorm to hide his two counters, Annul and Counterspell, forcing Law to take an Impulse, rather than a better card. On the third turn, Law played out his Necro and, as the brilliantly orchestrated Brainstorm played out, Yang had drawn his Annul. Unfortunately for him, Law had a Force of Will to bust through the Annul. Though Yang tried to find another answer with a Brainstorm, he was not able to - and Necro resolved.

Whenever Necro resolves, bad things are going to happen.

Law Necroed up to nine cards, finding a bunch of threat cards, but not the entire combo. He still needed to find an Illusions of Grandeur. Yang was reeling, with no real defenses left against the massive card advantage. Law Vampiric Tutored for an Illusions and used massive Necro draws to have a constant defense against Ang Jun's minimal resistances. When he lost the counter war over Donate to maindeck Pyroblasts, he conceded.

Ang Jun looked at his game two hand desperately. While it contained practically everything he needed, it didn't have two lands. He quickly mulliganed. His second hand had several searchers and a Force of Will. But it had a single Forest - and no other lands. After some deliberation, he chose to mulligan to five. Albertus was silent, but he had no room to complain with multiple Pyroblasts, a Phyrexian Negator and a couple other major threats. Yang kept his five-card hand, which contained a Thawing Glaciers. In a slower matchup, this card would allow him to reclaim some of the lost card advantage from his mulligans, but Trix puts so much pressure on its opponent that Yang didn't have time to fool with the Glaciers early on. 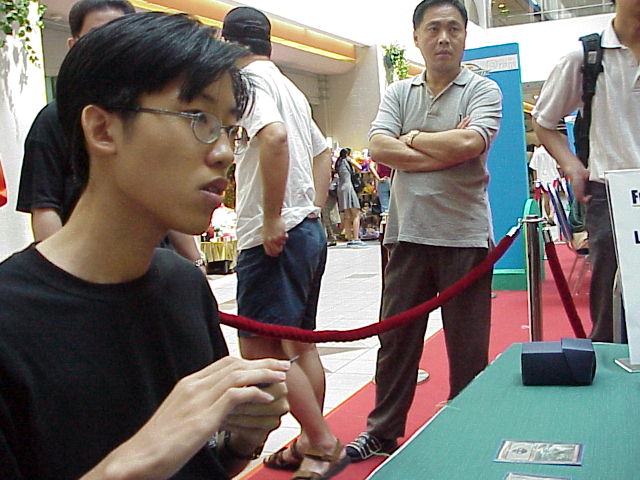 Law's first play came on turn two, in response to a Brainstorm - he Consulted for a Necro. Yang drew Emerald Charm, which was an amazing card in the matchup, especially since Law was relying so heavily on his Pyroblasts. He played out his Oath of Druids to nullify Law's sideboarded Negators. In the mean time, Law played the Necro and drew twelve cards, setting up another brutal hand. Actually, his hand before the Necro was pretty brutal - I don't think he anticipated getting the Necro into play without any resistance. When he pulled the huge twelve card Necro, he ended up discarding seven power cards. THAT's how good his hand was. Ang Jun was finally able to activate his Thawing Glaciers and get an Island. He drew an Annul to go with the Force of Will in his hand - so he could now cast either one. Along with the Emerald Charm, this was a lot of threat management.

Law took it all apart in short order. He Duressed. Now, if Yang had had some divine foresight, he'd have Force of Willed the Duress. Thinking that each of the three cards in his hand was just about as good as any other one, he allowed the Duress to resolve. Law quickly grabbed the Charm. Law's counter defenses were all Pyroblasts - the Charm would have won Yang the game! Law played out his Illusions and Pyroed it through the Annul, drawing nineteen cards, off of the Illusions life gain. On the next turn, Law Donated the Illusions, Yang tried to Force of Will, using his last two cards, and Law quickly Pyroblasted it. With five cards left in his hand, and access to six more if he needed them, Law thanked his Necropotence as Ang Jun extended his hand.