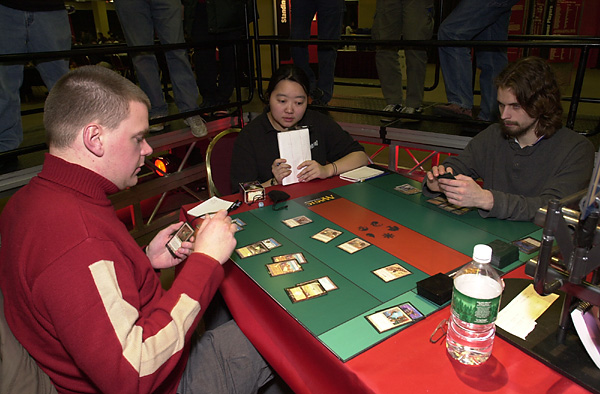 After eleven rounds of play, England's Ben Ronaldson and 2000 Pro Tour New York Champion Sigurd Eskeland both had 7-3-1 records. In order to have a shot, not likely though but still, they needed to win the last three matches of the day. Ronaldson, whom Randy Buehler considers one of the most important players in the World right now, had brought a mono-white rebel deck to Chicago. Eskeland had picked up a rebel deck as well, although his version had blue in it for some countermagic.

Eskeland won the important die roll and chose to play first. He kept his opening hand, which consisted of a Plains, two Adarkar Wastes, two Rishadan Ports, a Parallax Wave and a Lin Sivvi, Defiant Hero. Ronaldson kept his hand as well, and after Sigurd had played his first Plains, Ben had drawn a Dust Bowl, a Plains, two Chimeric Idols, a Disenchant, a Longbow Archer, a Lin Sivvi and a Seal of Cleansing.

Both players played lands only during the first two turns; Sigurd got out a Rishadan Port and started tapping down Ben's lands during his upkeep. He then played a third turn Lin Sivvi. So Ben fell behind, he cast a turn three Chimeric Idol but when he then attacked, Sigurd fetched a Defiant Vanguard and blocked to get rid of it. Ronaldson then played another Idol.

After this, Ronaldson did nothing but play three lands. Meanwhile, Eskeland got his rebel engine going while tapping down the Englishman's lands. First, he found a Defiant Falcon with which he started attacking, and then he got another Falcon and a Ramosian Sergeant. A Disenchant took care of the Idol, and Sigurd then went for a Steadfast Guard and a Rebel Informer. During turn nine, he attacked with his two Falcons, the Informer and the Steadfast Guard, and after thinking for a little while, Ronaldson scooped.

Both players sideboarded in quite a few cards. Eskeland removed Reverent Mantras and Crusades for Mageta the Lion, Wraths of God and Power Sinks. Ronaldson also sideboarded in Magetas and Wraths, and he also added Armageddons to his deck.

Ronaldson was wearing Dirk Baberowski's Top 8 shirt for the occasion, and he chose to play in the second game. His opening hand contained a Plains, two Dust Bowls, a Wrath of God, a Disenchant, a Mageta the Lion and a Parallax Wave, and he chose to keep it. Eskeland picked up his hand while his pig, dog, cow and rabbit watched over the match, and he chose to keep his two Plains, Coastal Tower, two Lin Sivvis, Defiant Vanguard and Ramosian Sergeant.

So although Ronaldson got to play first, he didn't get the quickest start. In fact, he played three lands, while Sigurd got out a turn one Ramosian Sergeant and then a third turn Lin Sivvi. But after all, Ronaldson had the Wrath of God, and he chose to use it during his fourth turn to wipe out the Sivvi and the Sergeant. 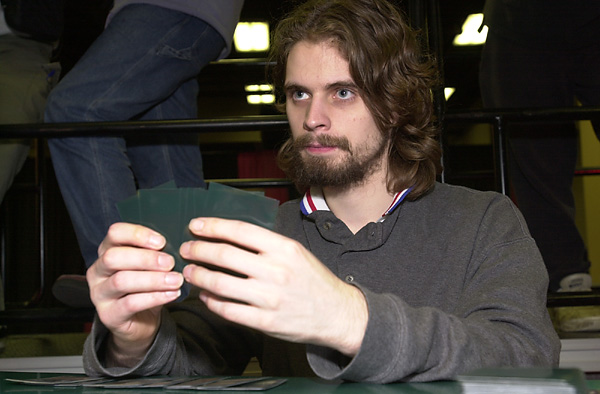 But Sigurd played his second Lin Sivvi, and Ronaldson then played his Parallax Wave and waved out the Lin Sivvi. However, he was unable to use the advantage he won to the fullest as Sigurd dropped a Rishadan Port and then a Dust Bowl. The Norwegian tapped down one of Ronaldson's lands and destroyed one of the Dust Bowls before the Englishman drew another land - a Rishadan Port. Eskeland destroyed the second Dust Bowl, leaving Ronaldson with two Plains and a Rishadan Port in play. But Ronaldson drew a Plains and chose to play his second Parallax Wave as Eskeland would get him down to three lands during his next turn.

Eskeland did indeed destroy the Port as well, but Ronaldson drew a fourth Plains and played it. So Sigurd figured that it was time to start getting out some more rebels, and he summoned a Defiant Falcon after laying his "sideboard Island." Then, he tapped down one of Ronaldson's Plains during his upkeep to prevent him from getting to four mana.

When his first Parallax Wave faded out, Ronaldson decided to Wave the Lin Sivvi and the Defiant Falcon with the second Parallax Wave, which left it with one counter. He then cast a Seal of Cleansing. Eskeland did nothing during on his turn, and so Ronaldson cast his first rebel of the match - a Ramosian Sergeant. During the following turn, he attempted to cast Armageddon, but Sigurd had a Power Sink and countered the spell. The Norwegian then searched for a Rebel Informer, and during his own turn, he put Ronaldson's Sergeant on the bottom of his library. He then attacked to bring the Englishman down to 15 life.

The Englishman took one hit from the Vanguard before he got out a Longbow Archer, and he also played four Plains in a row to get back up to four lands. Eskeland played a Dust Bowl, then he missed two land drops before he drew a Coastal Tower. But Ronaldson got out a Lin Sivvi as well, and he started attacking with the Longbow Archer.

Sigurd eventually drew a Ramosian Sergeant, which he cast. He also got a third land, an Adarkar Wastes, before Ronaldson got his Rebel Informer into play thanks to the Lin Sivvi. The Longbow Archer traded for the Defiant Vanguard, and when Sigurd used his Sergeant to search for another Sergeant, Ronaldson put one of them on the bottom of Sigurd's deck. Then, he searched for a Steadfast Guard.

Ronaldson attacked with his Steadfast Guard to take Sigurd down to 16 life. When the Norwegian then searched for another Sergeant, both the Sergeants decided to have fun at the bottom of Sigurd's library, and the Norwegian was left without any creatures in play. However, he finally drew a fourth land, and then it was his turn to wipe out his opponent's creatures with a Wrath of God.

Ronaldson played another Lin Sivvi, but Eskeland cast yet another Wrath of God. Before it resolved, Ronaldson put the Rebel Informer back in his deck. Then, during his own turn, he dropped Mageta the Lion - and this time, Sigurd didn't have a Wrath of God in handy. So the Norwegian dropped a Defiant Falcon and passed priority.

Having the upper hand, Ronaldson started attacking with Mageta. He also cast a Parallax Wave and waved out the Falcon. Eskeland Disenchanted the Wave, and after taking a few hits from the Mageta, he was able to search for a Lin Sivvi. However, Ronaldson then figured it was time to activate Mageta, and he cleared the table before continuing the attack. 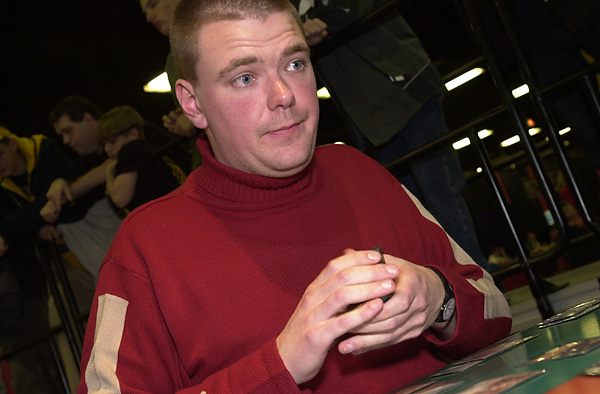 Eskeland got out a Steadfast Guard and a Ramosian Sergeant, and Ronaldson activated Mageta yet again to kill them. Then, the Norwegian drew into a Wrath of God, and finally he got rid of the Mageta and a Ramosian Sergeant that Ronaldson had cast. He was at one life only though, and things looked bad for him when Ronaldson played a Defiant Falcon and a Parallax Wave. Trying to survive, he Disenchanted the Wave and then played his own Falcon that blocked the other. But when Ronaldson dropped another Mageta the Lion with a Seal on the table for Eskeland's Parallax Wave, the game was over.

With only about 13 minutes left in the round, the two players shuffled up for the second game. Sigurd mulliganed once after getting a one land hand, then he drew two Plains, a Parallax Wave, a Disenchant, a Lin Sivvi and a Rebel Informer and decided that he would keep that hand. Ronaldson kept his hand as well.

Both players got off to a pretty slow start for being rebel decks. They played lands only during the first two turns, then Eskeland dropped a Lin Sivvi while Ronaldson got out a Defiant Vanguard. But Eskeland had the upper hand as he could go get his second Rebel Informer. Ronaldson then played Parallax Wave and waved out Eskeland's Lin Sivvi. Then, his Vanguard was returned to the bottom of his library, and Sigurd started attacking with his Informer as well.

Ronaldson played a Longbow Archer. Eskeland chose to Disenchant the Parallax Wave, and then he played a Wave of his own and waved out the Longbow Archer. He also waved the Mageta the Lion Ronaldson played during his next turn, and attacked with his Informer. During the rest of the turn, nothing more happened except from that Ronaldson cast a Seal of Cleansing and used a Rishadan Port to tap down some of Eskeland's lands. Then time was called, and the two players both realized that they had no way of winning and shook hands for the draw.