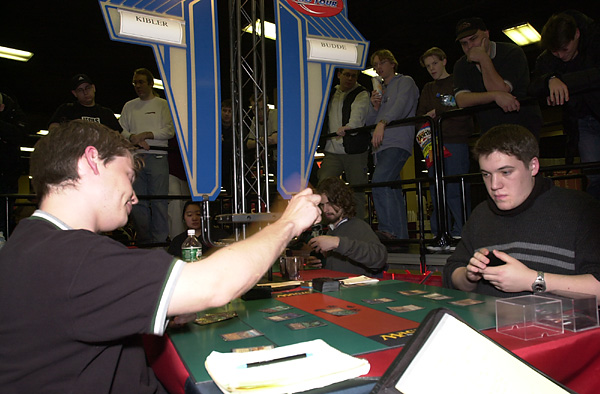 By now, most of you following this coverage know the players, and their decks, well. For those of you just joining us: Kai Budde is a former World Champion playing rebels. Brian Kibler is the prodigal son of Magic, returning after two years of (gasp!) physical sport to show us all mind and body can both be finely honed. He is playing red-green aggression with a splash of white.

Looking like a one-man sports drink commercial, Brian got pumped up for the game by jamming to his CD Walkman while he shuffled. This reporter couldn't make out the song or the artist, but it sounded like that music you crazy kids listen to today. You hear me well, that stuff won't do you a bit of good.

Kai won the roll and went first. Brian took one mulligan. Kai laid out a nice progression of rebels, from the lowly Sergeant all the way through Lin Sivvi to the Ramosian Sky Marshal. (Some of these were summoned; some were searched out. The fates were good to Kai's mana supply.) Brian brought out some perfectly respectable creatures - River Boa, Chimeric Idol, and Jade Leech - but since none of them sprouted wings, Kai's assault through the air eventually proved deadly. 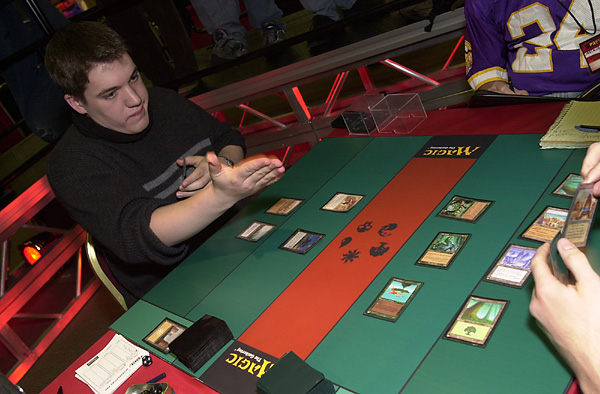 This time it was Kai's turn to mulligan. Brian went first and wasted no time with the beatdown. Every turn saw a new play: Birds of Paradise, River Boa, Jade Leech, Flashfires (sideboard card), Chimeric Idol, River Boa. He did not have a turn seven play, but since Kai had only made two plays the entire game (Ramosian Sergeant and Chimeric Idol, and he barely got those out in the midst of Flashfires and Rishadan Ports and what not), that didn't seem too horrible. Kai was down to three life, and a simple attack was sufficient. Kai scooped after his next draw step.

This reporter noticed that Brian drew Rith, the Awakener in his opening hand; but Mr. Kibler never had to cast it.

With two seven-turn games under their belt, the next game was set up to be somewhat stormy. It lasted nearly twice as long in turns, but was just as fast-paced and engaging. A good show, and the spectators present loved it.

This time, both players came out of the gate swinging. Kai kept a Defiant Falcon in the air for the first half of the game, and a Steadfast Guard and Defiant Vanguard soon joined it in play. Brian played a turn three Armageddon while the Falcon was alone; with a Bird of Paradise and Llanowar Elf on the table (and managing his lands right) he was still able to pull off a turn four Jade Leech. With a River Boa coming on board soon afterward, the momentum seemed to be Brian's. 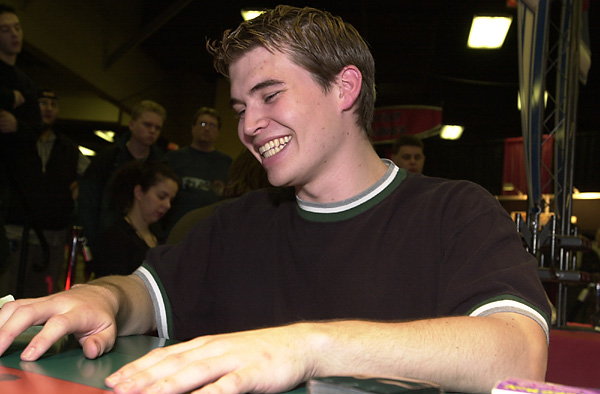 Then, on turn nine, Kai finally topdecked the fourth land he needed to play Wrath of God. What followed next was a series of Chimeric Idols (at least two on each side); Kai managed to poke through three times with at least one. When he played a Sky Marshal on turn 13, Brian had no choice on his subsequent draw but to concede.

While the Flashfires Brian had sideboarded in for games two and three did make a splash in game two; neither they nor the Tsabo's Decree he had splashed in showed for game three. Kai had set aside his Wax/Wanes, Longbow Archers, and a few random rebels to make room for three Wraths of God, three Magetas, and two Seals of Cleansing (anti-Idol tech that did work once).