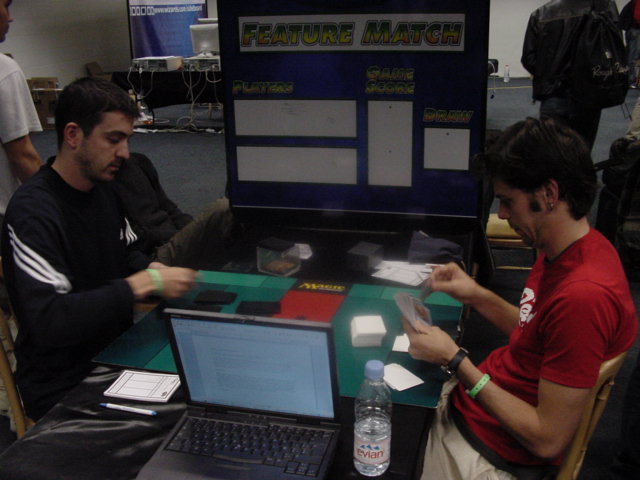 There are many French players here this weekend, and these two are currently the highest placed, with 30 points coming into the round. This puts them only one win away from a virtually certain top eight berth. Of the two, Christophe is a much better known player, with a top eight finish in Osaka. He is playing Blue-Green Madness while Gerard is playing Blue-Black: Control, rather than the Upheaval deck.

Haim had to take a mulligan but found a reasonable six card hand; opening with a Wild Mongrel. Gerard used a Mesmeric Fiend to take Arrogant Wurm before it’s Madness could be played so Christophe played a Cephalid Looter instead. Next turn his Mongrel got an Elephant Guide, but it didn’t last long since Garcia had a Faceless Butcher. Haim had to Aether Burst his own Cephalid Looter when Gerard played a Chainer's Edict, since it was his only creature. However, Garcia had also drawn a Nantuko Shade and a Braids, Cabal Minion, which ended the game pretty quickly. 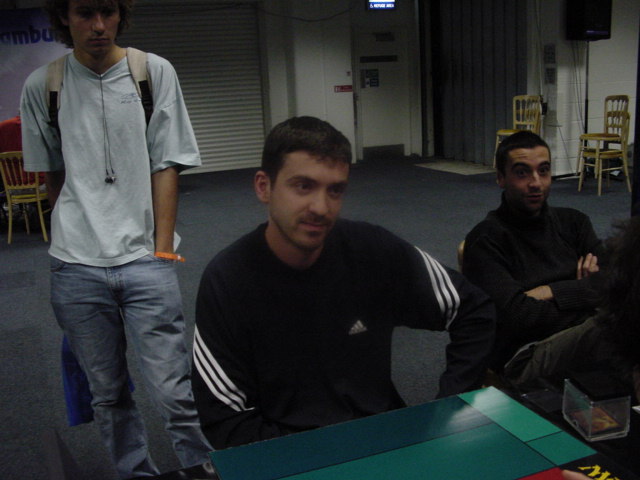 Once again Christophe opened with a mulligan, and this time Gerard had to take one as well. Haim’s six cards weren’t that great, as he missed his second land drop until turn 3, and got his Forest Rancid Earthed. He did have an Aquamoeba in play, and this allowed him to get an Arrogant Wurm into play, and he also dropped a Basking Rootwalla through the Madness. Haim discarded a Wonder to pump the Aquamoeba, and started to swing in.

Gerard got a Shadowmage Infiltrator down and although he was low on life the Infiltrator got him the cards he needed to deal with the two creatures. Chainer's Edict took care of the Aquamoeba, and the Rootwalla disappeared under a Slithery Stalker. Haim had a Phantom Centaur but it was Bursted, and this gave Gerard the time he needed to get to seven mana so he could start flashing-back Chainer's Edict. Even so he was on such low life that he needed draw a creature-kill card for every monster.

Two of Christophe’s creatures disappeared under Faceless Butchers, so when he drew an Aether Burst, targetting the two Butchers and the Stalker, he could get enough flying damage through to end the game that turn. 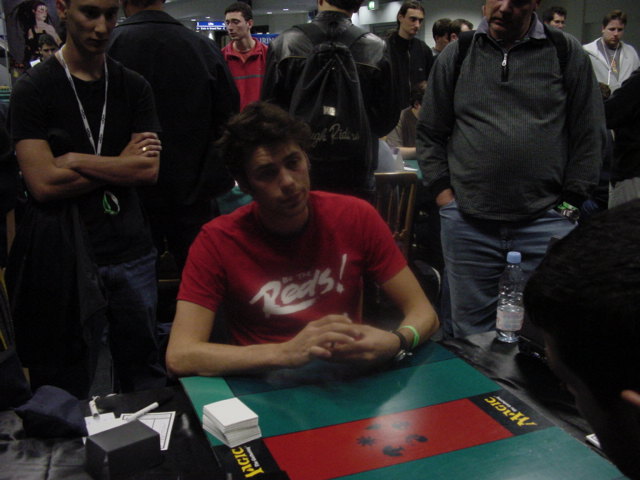 The players only had ten minutes left for the third game, so they increased their very leisurely pace a little, and even managed to finish shuffling inside two minutes. The first play was a Wild Mongrel on Haim’s second turn.

Gerard used Rancid Earth to destroy Haim’s Forest, but this time he had another one, and quickly managed to get an Arrogant Wurm in play via the Mongrel. Once again Garcia played a Shadowmage Infiltrator to try and search for answers this time he found a Butcher for the Mongrel, and a Slithery Stalker for an Arrogant Wurm, leaving Haim with no creatures in play, but with Garcia on only eight life. Their drawback was once again revealed, though, since Haim had an Aether Burst to force through lethal damage.