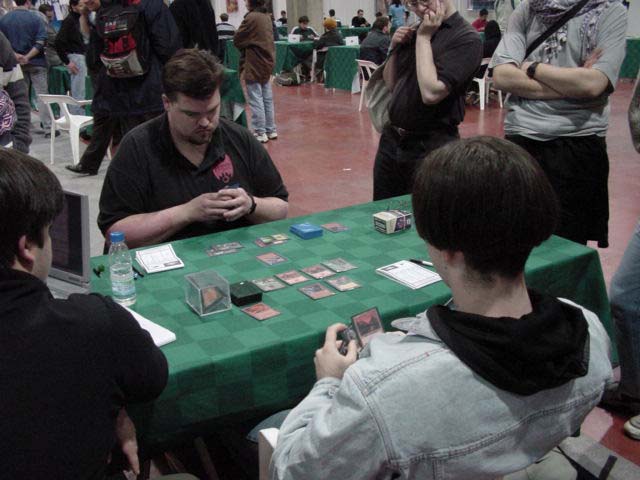 With the Top 8 still in sight, one of the top Spanish players and a Pro Tour Champion cross paths in this decisive feature match. Whoever wins is still in contention for the Top 8. The loser will have to battle it out in the last round... just to make the top 32.

Darwin played a Hate Weaver and drew first blood because Hector didn't want to lose his freshly casted Shivan Zombie. Fuentes' next creature, Urborg Phantom, got removed by a Singe and Kastle took to the skies with a Volcano Imp. A Maniacal Rage gave the Zombie some extra power to keep Hector ahead the damage race... that would have been good but the Zombie suddenly got even bigger: a Sinister Strength turned him into 7/5 behemoth!

Darwin thought long and hard about this huge, literally, problem and used a Primal Growth to thin his deck and play a Yavimaya Barbarian. He now had enough creature power to stop the huge Zombie but he elected to swing with the Barbarian and Weaver leaving the Imp back to chump.

"You are at seven, right?" asked Hector before he played a Stun to finish game one. It was a very short, and extremely bloody game. 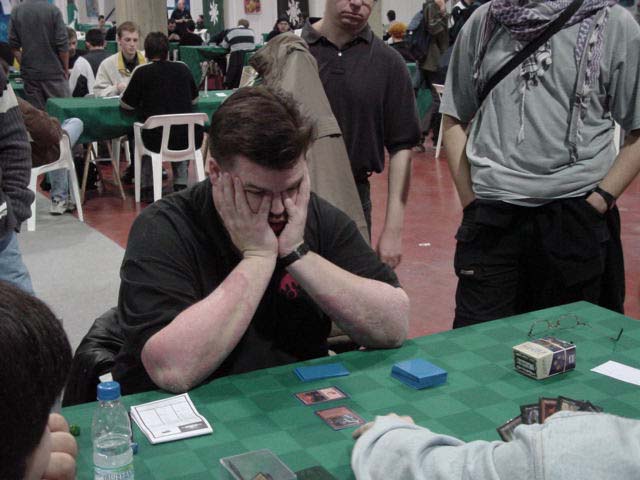 The first creature to enter play was Darwin's Quirion Explorer and he quickly followed that with a Volcano Imp. Hector kept dropping swamps and seemed to be mana screwed but Kastle didn't want give him any breathing room. He played a Hate Weaver, a Thornscape Familiar and used a Terminal Moraine to improve his mana base and thin his deck.

Darwin mulligan once and Hector played a Thunderscape Apprentice. Kastle got one as well. That forced Fuentes to stop and consider placing a Sinister Strength on his. He instead elected to drop a Rogue Kavu. The Kavu was promptly blocked by the Apprentice in Hector's next turn.

The Spanish took to the skies with a Volcano Imp but Kastle dropped his third different land type (a forest) and played a Mire Kavu. While the Kavu seemed bigger the Imp was suddenly filled with a double dose of Sinister Strength and turned into a amazing 8/4.

A Defiling Tears by the American killed the Apprentice but it was too little, too late. An euphoric Hector cast a THIRD Strength and the 11/5 flyer was, not surprisingly, enough to finish the match. 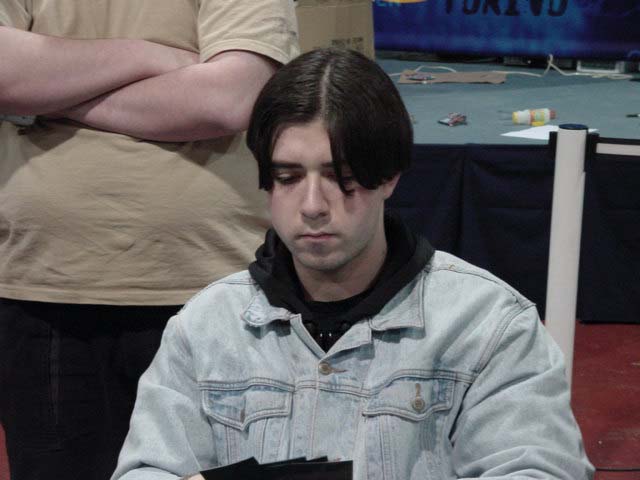 Another amazingly fast game. Darwin Kastle was a true professional, gracious even after this defeat that pushed him out of contention for Top 8.