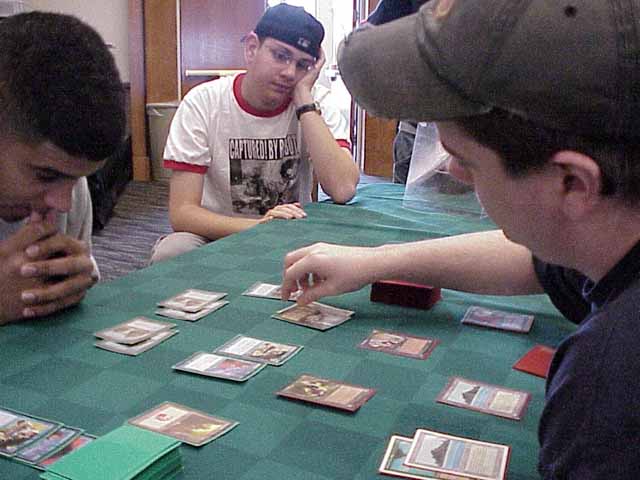 David Williams and Mike Bregoli sat down for round twelve with top 8 on the line. A loss meant elimination for either one of these players at this point, and the tension was high despite the fact that both of these two friends were still smiling and talking. The matchup definitely favored Williams, with his Obliterate/card drawing deck, versus Bregoli's more traditional Tradewind/Survival deck. Both players knew well the deck they were facing, and Mike won the flip and we all settled in for a long match.

Mike and Dave both started well early, with Mike developing his mana with some creatures like Bird of Paradise and Wall of Roots, while Dave Impulsed and used Fact or Fiction to develop his early mana. After a small permission battle over a Survival of the Fittest (that Dave won) , he untapped and played out an Oath of Druids and won the small counter war over that as well. After David Oathed up a Morphling, things were looking bad for Mike. Bregoli managed to find his own Morphling, but not until he was at 5 life because of a Time Warp (and thus two attack phases) and was forced to 'chump' block. Shortly after, Mike conceded. 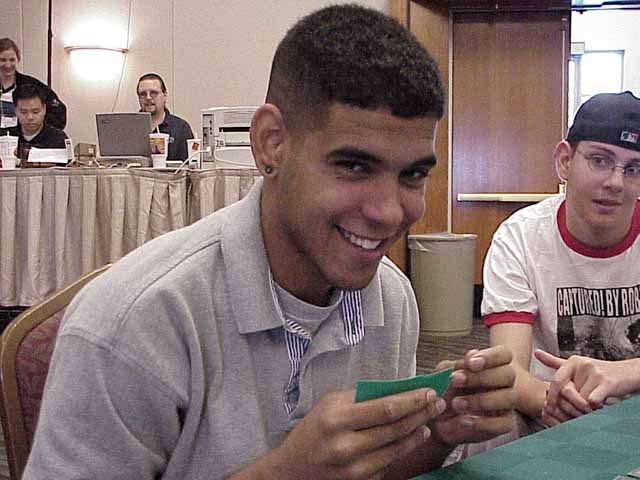 Game two started out in much the same way, as Bregoli developed early with mana creatures and lost a permission battle over Survival. This match was different that the first, as Bregoli managed to force a Tradewind Rider into play on turn 4. Williams answered with a Morphling on turn 5 as Bregoli was tapped out, but didn't have the extra mana to make it untargetable, and the Morphling returned to David's hand the next turn. David replayed it with an extra land open, and the Morphling stuck. After many, many, many turns of Morphling running into a Bird of Paradise (that would get bounced to the safety of Bregoli's hand via Tradewind Rider), something actually happened on turn twelve. Williams found and cast an Oath of Druids, after an Impulse. The Tradewind bounce had a new target, Mike was forced to play out a few more creatures in order to use the Tradewind twice a turn (with Quirion Ranger). Williams went to his turn and dropped a bomb...Timewarp! This would allow David to replay the Oath and actually get to use it, because Bregoli's Tradewind was 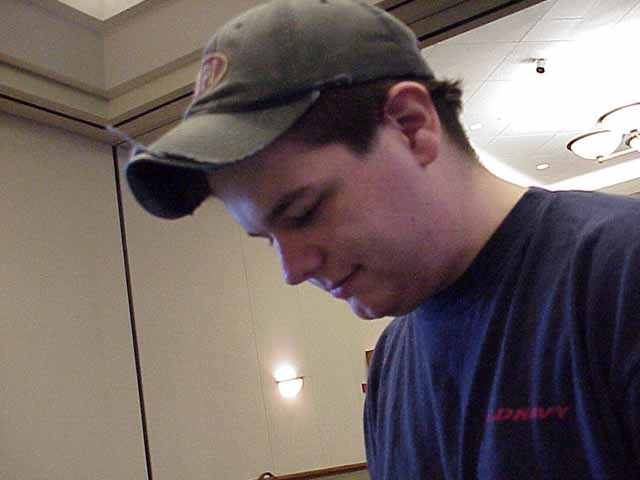 tapped. Williams took his second turn and Oathed up another bomb...Crater Hellion. The Hellion ended up killing a Spike Weaver, Quirion Ranger, and two Birds, rendering the Tradewind inactive. A spike got moved onto the rider to save it, making it 1/5, and David saved his own Morphling. Things were starting to look bad for Mike when it got even worse. Obliterate, with two nice enchantments in play, Oath of Druids and Exploration. Bregoli returned the Oath with his Tradewind, but Williams had a nice hand, playing out 5 lands in 3 turns with the Exploration. Failing to draw lands, Bregoli finally just ran out of time as the clock expired. Game and match to David Williams.