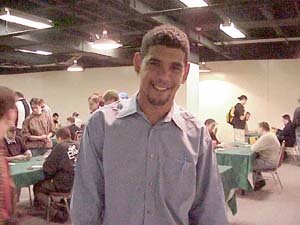 This crucial round was a showdown between one of Magic's greatest personalities and one of its rapidly rising stars. This battle between Dave Williams and Dustin Stern had great stakes involved. The winner would get to improve his standings toward a Top 8 finish, while the loser would be all but eliminated from contention.

Williams was running a black-red deck that sported three Scorching Lavas, Plague Spores, Terminate and several other removal spells. His creature base seemed to be a little weak, but with the amount of removal he packed, all of his creatures were powerful threats.

Stern went the opposite direction with his draft. Picking green, red, and white spells, his deck was loaded with all kinds of crazy creatures; Kavu Chameleon, Serpentine Kavu, and Thunderscape Battlemage were complemented with a variety of enhancement spells. Armadillo Cloak, Strength of Unity and Explosive Growth all strengthened his creature base, while Ghitu Fire acted as form of elimination or a high-powered ending kill spell.

Dustin won the roll and opted to play first. For several turns it seemed as if both players were mana hosed. Dustin played a Terminal Moraine to fix his mana issues while Dave was not as lucky. When Dustin enchanted a Yavimaya Barbarian with an Armadillo Cloak, Dave took his cue and scooped his land-light cards back into his library.

After losing the first game, Dave decided to play. While he was satisfied with his hand, Dustin was not and quickly took a mulligan. After looking at his hand of six, Dustin kept and Game 2 was on. 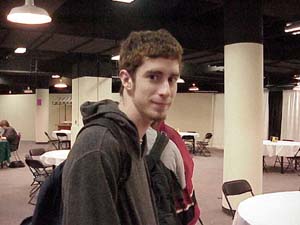 Dave came out like a champion in this game. Playing threat after threat, Dustin was unable to keep up with him. Soon, Dustin was into a desperate state. Mana hosed, he was unable to take advantage of his Thunderscape Battlemage's kicker, and after Dave summoned forth a Duskwalker, Dustin scooped.

Before this game, both players were complaining about the lack of real competition in this match. Mana issues had plagued both players in the match already. They started the third with hopes of getting at least one real game in.

For the first three turns, each player laid a land and passed turns. On turn four Dave cast a Mire Kavu, while Dustin was beginning to show signs of mana hosing again. Dustin summoned a Kavu Recluse to stop the bleeding from the Mire Kavu, but it was a temporary reprieve. A Ravenous Rats from Dave forced the discard of an Llanowar Calvary from Dustin. It seemed like a lost cause for Dustin, but he soon peeled a Thunderscape Battlemage from the top of his deck. The turn after it saw play, Dave played Plague Spores, and removed the Battlemage and Dustin's lone forest from play. After a Ghithu Fire aimed at one of Dave's creatures, it seemed that Dustin might have been able to recover. It was not to be however, and Dave dropped another Ravenous Rats, and rode them and Scorching Lava to victory.