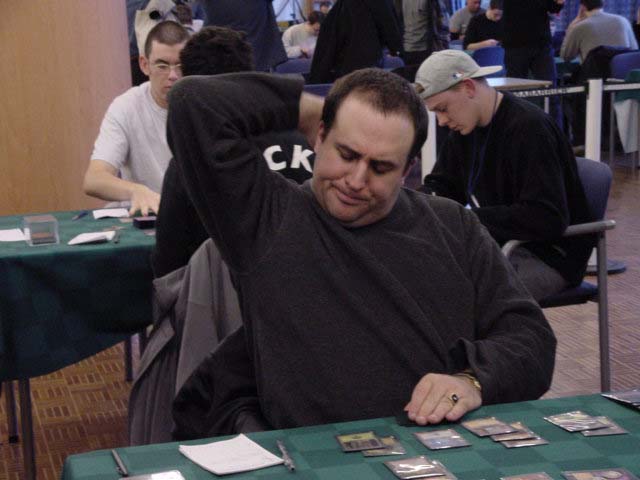 Both players were on 9-1-1 going into this match and boy did they talk the talk! They had a good ten minutes to psyche each other out as they both got deck-checked when the round began. They have a bit of a discussion about mulliganing and wishing each other good luck, then wishing the screw then tearing each other apart and the crowd stay pleasantly amused.

Dave is playing a very strong red/black deck with bombs such as Yawgmoth's Agenda, Tsabo's Decree and some great creatures to boot. Gary's four color G/W deck has some powerful cards such as his Dragon (Rith), but as with all decks with multicolored cards the mana might cause problems. Having said that - he does have eight forests, a Fertile Ground and two Harrows.

Gary shows Dave his Tek and his Crosis from the last draft and asks him to guess which one is the Crosis. Price, not trusting the mind-games, flips a coin to decide which one is the Dragon and gets it right - he elects to play first. Things get bad pretty quickly for the American though as he has to mulligan twice, and then has to keep a four land hand with only one spell. 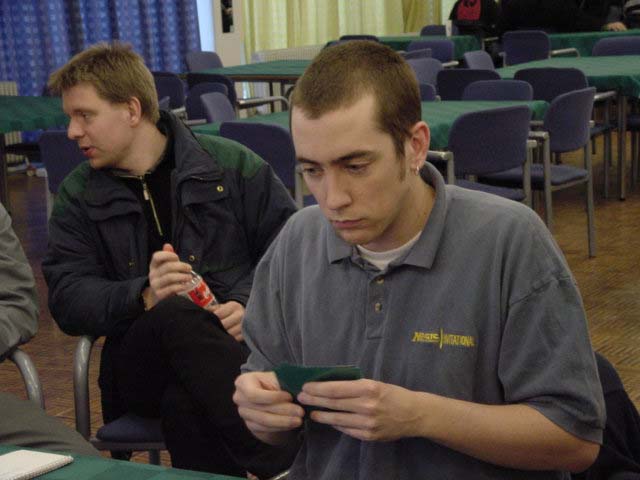 The game lasts only seconds; then as a Cloaked up Llanowar Knight went the whole way - it's protection from black ability leaving Dave with no answer at all. All the creatures in Dave's hand and on the table are black, and he has no red removal, so he dies on turn seven.

Gary gets another great start as he lays his only Llanowar Knight again on turn two, a Pincer Spider on turn 3 and then attacks with the Spider on turn four casting an explosive growth to kill the blocking Firebrand Ranger and Hooded Kavu. Price was having trouble finding a swamp, but then draws 2 consecutively on turns five and six to make a Shivan Zombie then a Reckless Spite, killing the Spider and the freshly cast Captain Sisay (who can fetch Rith!).

Despite this setback Gary keeps whipping out power cards like his Thornscape Master and then Rith, but the American has the answers in the form of Soul Burn and then (ripping his sixth land off the top) Tsabo's Decree.

All this time, however, the Llanowar Knight has been strolling on through for 2 a turn, so Price was on eight life before he could Recover his Firebrand Ranger to block it. The game may well have been close from this point on as Gary managed to draw his Armadillo Cloak again and spank Dave down to four, but then the Yawgmoth's Agenda hit and things got Soul Burned, and creatures started reappearing. Not making it any easier for Gary was his 4 consecutive land draws , so with nothing on the board except land, Gary died.

Gary's plays in this game were: