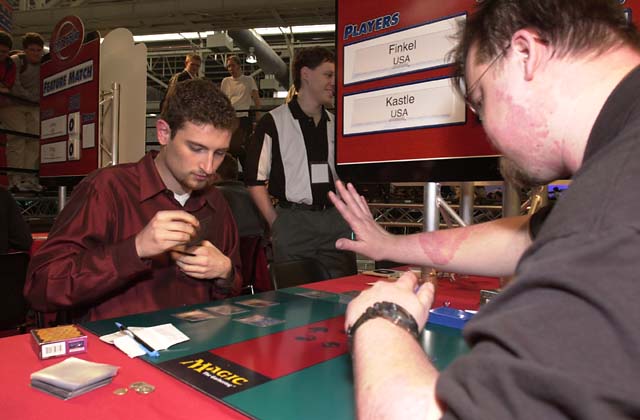 This is what the Pro Tour is all about: big names clashing in the Feature Match pit. Between these two behemoths they have something like fourteen Top 8s. They are also members of a very exclusive Magic club: Invitational winners. Darwin Kastle is constantly swamped with requests to sign Avalanche Riders and Jon's Shadowmage Infiltrator is coming out in Odyssey soon. If that isn't impressive enough, they are two of the very few players that can brag about having at least three Top 4s in individual major events.

Kastle opened up with a Phyrexian Battleflies and an Urborg Drake announcing a impending air attack. Jon soon put an end to those ideas with a Glimmering Angel backed up with an Angelic Shield. The Drake was forced to attack and Finkel took the hit to protect his Angel from any potential mischief while he was tapped out.

Darwin added a Metathran Transport to the air force and Jon responded with an Wings of Hope on his Angel. If that brought any hope for Finkel it surely brought a new world of trouble for Kastle. The Angel ate up the Drake in the next attack phase and then went in for some damage of his own. Jon dropped the first non-flier creature in the shape of a kicked Ardent Soldier. Kastle followed the trend with a Nightscape Familiar and sent his two remaining fliers into the Red Zone.

A kicked Bog Down from Finkel's side got him two damage from a Scorching Lava and nailed two lands. The Angel stepped into the Red Zone and Recoil threw the Batteflies into Darwin's now empty hands and thus to the graveyard. The Angel's swings had Kastle huge frame pressed tight against the ropes and looking hard for an answer.

Finkel gave no quarter, respite or even mercy removing the Transport with a kicked Stormscape Battlemage to end a very fast, and one sided match. Kastle drew four spells during the whole game and despite his best effort couldn't slow down the demolishing machine that Finkel drafted.

Eager to avoid a draw both players shuffled at full speed despite having a lot of time still on the clock. Despite all the pressure and the huge crowd leaning over the railings they both kept a good spirit fueled by continous jokes and ironic comments. A few highlights:

Darwin: "We have forty-five minutes for two games. I think we can do it." 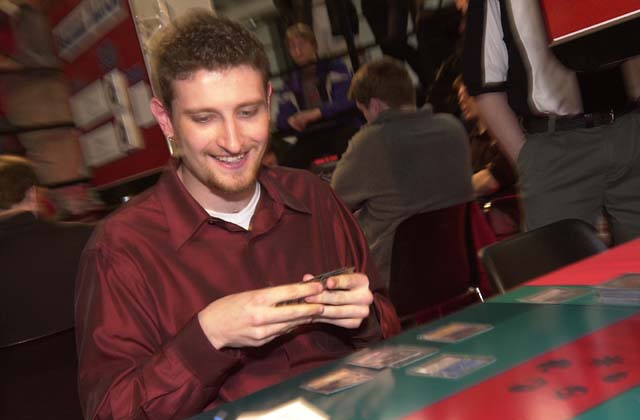 Darwin: "...it's those little things that spell success Jon."
Jon: "That and green hair."
Kastle: "And fashion, I really like that shirt." (with a mocking smile)

Jon took a mulligan and was forced to play a Lair on his second turn to drop a Gallina's Knight. That made Darwin's first creature, a Caldera Kavu, a lot less impressive. With the Knight holding back the Kavu they both played "draw-stare-go" for a while until Kastle used a kicked Hypnotic Cloud to rip Finkel's hand to shreds. Jon stopped the nasty Cloud with a Dromar's Charm but on the next turn found himself at the receiving end of a kicked Probe.

He answered with a Reviving Vapors that revealed three lands of which he kept Terminal Moraine. Darwin discarded two Mountains while Finkel lost Glimmering Angel and Ardent Soldier. Another kicked Probe entered the Red Zone but this time on the opposite direction. Jon discarded the Moraine and Coastal Tower while Kastle dropped Wash Out and Scorching Lava.

After these violent shifts in card advantage they decided to get back to good old-fashioned no-nonsense Magic: playing creatures. Kastle bounced back with a Shivan Zombie and a Metathran Transport. On the other side of the table the Knight gained Wings of Hope and stepped into the Red Zone uncontested. Darwin sent his whole team in and pumped the Caldera Kavu to deal six damage as a bitter retaliation. Jon tried to shift the tide with a doubled kicked Stormscape Battlemage targetting the Caldera Kavu but Kastle saved it with a kicked Rushing River that also bounced the Gallina's Knight.

On the following turn, and after long deliberation, Kastle Tribal Flamed the Battlemage out of the way and sent his crew in for three more damage. Jon replayed the Gallina's Knight and added a 3/4 Zanam Djinn to the mix. The Transport sneaked by the Djinn and the departed Caldera Kavu made a second appearance.

Both players took a minute to bite their nails and look through the graveyards before Jon decided to send his Djinn into the Red Zone. He then played a Marsh Crocodile and pulled a neat stack trick to get Kastle to discard two cards by playing the Crocodile twice with an empty hand. Kastle tried to puzzle his way out of that situation but his best move was nibbling away with the Transport once again.

The Crocodile came in again this time bouncing the Battlemage for another round of creature removal. Under the protective gaze of a freshly peeled Angelic Shield the Djinn and Crocodile attacked forcing Kastle to double block only to watch the blocked attacker get saved by the Shield. Caldera Kavu, Phyrexian Battleflies and a Metathran Transport were not the perfect blockers for the Marsh Crocodile, Zanam Djinn and Galina's Knight. Despite this huge advantage Jon Finkel pounded the top of his deck, demanding his fourth consecutive topdeck. 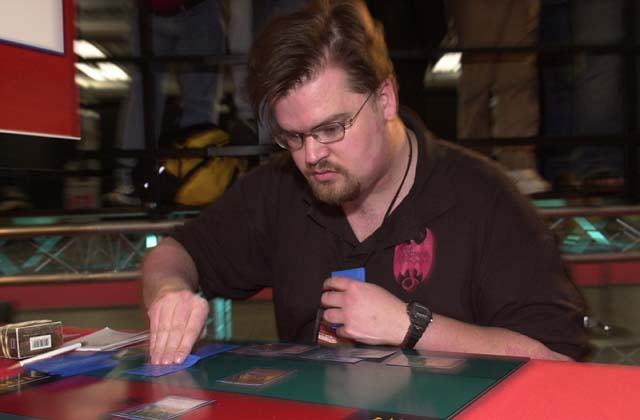 His next attack forced Darwin to go down to one and despite a Plague Spores on the Djinn. Finkel didn't even blink and used a Recoil to bounce the last blocker out of the way and allow the crucial Crocodile to put Darwin Kastle out of his misery. Jon's deck was just insane and there was little else Kastle could do with the cards he drew.