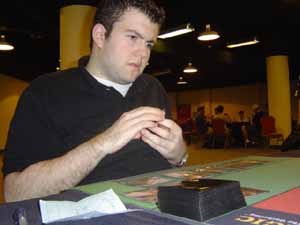 Sean Vandover is flying high in his first GP Day 2. A casual player since the days of Revised, he’s only stepped up to tournament Magic this past year. He hails from Germantown, Maryland, and his only loss so far comes at the hands of Bob Maher, currently undefeated. He is playing Goblins, because it has draws that can beat even the decks designed to crush it. Now he faces the acerbic Josh Ravitz, playing Slide.

Vandover shipped back his first hand, and kept his second. Ravitz answered a first turn Skirk Prospector with Lightning Rift.

“That seemed like a good play for you.” – Sean Vandover

Vandover followed up with a Goblin Piledriver, but it only dealt one thanks to a cycled Forgotten Cave. Meanwhile Antonino DeRosa came by to entertain the players. His ramblings did little to impress.

Next up was a Goblin Goon. Ravitz sat back on four mana, his fifth having come into play tapped. Vandover had no fear of Wing Shards. He summoned a Sledder and sent the Goon and Piledriver into the Red Zone. Ravitz took nine, falling to eight. He untapped and Starstormed them away. Vandover made no play. That was Ravitz’s cue to serve up a face-up Angel.

Vandover battled back with Goblin Goon and a Piledriver. Ravitz swung overhead, then blunted an incoming attack with Decree of Justice for three Soldiers. A Shock on one meant that Ravitz couldn’t take down the Piledriver. Still, Ravitz was in control. He played a Rift and hit again, then Cycled Spark Spray to kill the Piledriver inside Vandover’s attack step. An Eternal Dragon cycled to the face. Another Angel hit and he was back up to twenty. Vandover summoned a Clickslither and swung in, but it was far too late for that to matter. 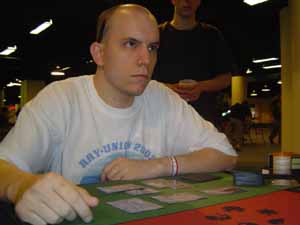 Vandover had to mulligan again in the second game. He kicked things off with a Prospector and a Goblin Sledder. Ravitz cycled a Gempalm Incinerator to get rid of the Prospector, and then since Vandover had missed his third land drop, tried a turn-three morph. He tapped his deck, but no help was forthcoming.

Spark Spray got rid of the Sledder, but Vandover had a Prospector to replace it. Ravitz played a face-up Angel. Finally, Vandover found his third land, a Goblin Burrows. He swung in. Ravitz naturally blocked. Vandover pumped it up, put damage on the stack, then sacrificed his Prospector to Shock the Angel, neatly killing it. It seemed like a huge blunder by Ravitz, who was sitting at fifteen life.

Ravitz made no move. Vandover seized the opening and got in with Clickslither. Again Ravitz was immobile. Vandover tried a Siege-Gang Commander. Ravitz responded to its coming into play with a Starstorm for five, then untapped and played an Eternal Dragon. Threaten from Vandover let him brawl in. Ravitz softened the blow with a Starstorm for one, falling to seven.

Now it was his turn to hit with the Dragon. Vandover made a second Siege-Gang Commander, forcing Ravitz to hit and then Vengeance the board. Vandover’s Goon was quickly outclassed by Jareth and Silver Knight. Another Rift, and the game was Ravitz’s.