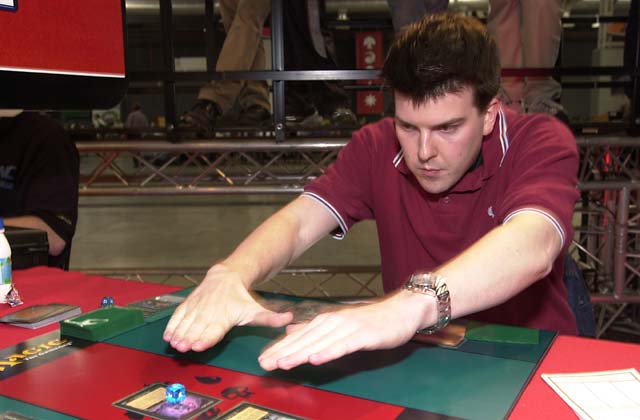 These two German countrymen were at the head of the field going into the last draft. Kai had 31 points, and Patrick had 30 points. They needed 33 to get in, so the winner of this match would be guaranteed a Top 8 berth. If Kai won here, he would be the first person to make Top 8 in three different continents, and it would be his third Top 8 of the season. Patrick is no stranger to the business end of Pro Tours either, as he finished Top 4 with his team 'Draften und Spielen' in PT New York.

Kai kept a hand with a lot of green cards, but no Forest. He was still able to play Thunderscape Apprentice and attacked with it once before Patrick summoned Ravenous Rats. They forced Kai to discard Thornscape Familiar, and Budde Singed them as he had a couple of other one-toughness attackers in his hand.

Drawing a third land allowed Kai to cast Viashino Grappler, and Mello chose not to block either creatures with his Hate Weaver when Budde attacked. He had a much larger blocker in his hand ready for the fourth turn - a Marsh Crocodile. With only Darigaaz and Plague Spores in hand, the Spores had to go.

His Viashino Grappler traded with Marsh Crocodile, but Kai didn't have anything immediate to deal with Mello's Phyrexian Reaper. Kai drew a Kavu Titan but only had one Forest in play. Mello drew a Cavern Harpy and used Hate Weaver to play it, then replayed his Weaver as Kai drew a useless Quirion Sentinel.

Mello's attack knocked Budde down to eight, and Kai finally drew a sixth land for his Darigaaz. Unfortunately for him, Patrick now had eight lands in play allowing him to pump his Harpy enough with the Hate Weaver to kill Darigaaz at the cost of only one life. Kai did not block the Cavern Harpy, and chumped the Phyrexian Reaper with his Thunderscape Apprentice.

After the attack, Patrick paid a life and replayed his Cavern Harpy to untap it and leave it back to block Darigaaz. This is exactly what he did but with Kai on only six life it seemed like the wrong thing to do as he could just have attacked back for the win.

Kai summoned a Kavu Titan with kicker. Mello sent across Duskwalker and Phyrexian Reaper, forcing Budde to chump block the Reaper with his Thornscape Apprentice, and go down to three life. Mello himself was only on nine, but seemed to have the game under control as he replayed Cavern Harpy, and played an Aerostat as well. Budde didn't draw anything to allow him to block enough creatures, and had to move onto the next duel

Kai chose to go first in the second game, and kept a rather slow looking opening draw. Mello's hand was even worse, and he had to take a mulligan. Nevertheless he managed to make a first turn Tidal Visionary, which Kai Strafed before it could become active and make the Strafe virtually useless.

Patrick Bogged Down Kai, to regain the card advantage he had lost with his mulligan, and both players did nothing but develop their mana bases for a while, until the fifth turn when Kai made a Kavu Climber. Patrick cast a Probe with Kicker to leave Budde only one card in hand, but it was a Serpentine Kavu.

Once the Climber had attacked, Kai played his Serpentine Kavu, and suddenly Patrick was under real pressure. All he could do on his next turn was play a Ravenous Rat, and a Hate Weaver, who double-blocked the Kavu Climber. 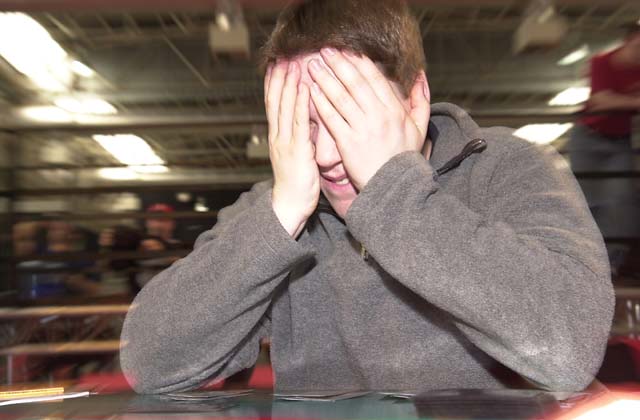 Budde's attack had reduced Patrick to thirteen, but he had a Goham Djinn which traded with the Serpentine Kavu, then a Phyrexian Reaper and suddenly Kai had the weaker board position. Budde summoned a Quirion Sentinel and a Thunderscape Apprentice, and the Reaper attacked. Mello had drawn something even better than the Reaper. He played Marsh Crocodile, returning and discarding the Reaper, followed by a Lord of the Undead that could return the Reaper over and over.

Budde drew a Thornscape Familiar and the Crocodile attacked him for four. The life totals were Patrick 12 - Kai 13. Budde topdecked a Viashino Grappler, but this didn't stop Mello from attacking. The Grappler blocked the Crocodile and was pumped up but Patrick had a Repulse ready for when damage was put on the stack. The Reaper, now 4/4 because of the Lord of the Undead, brought Budde to nine. Mello replayed the Marsh Crocodile gating the Lord.

Kai put Maniacal Rage on his Quirion Sentinel and attacked but this only allowed him to trade with the Crocodile. Mello replayed his Lord of the Undead, and the Phyrexian Reaper brought Kai to five. Budde drew nothing that helped him and scooped as Patrick cemented his place in the Top 8.