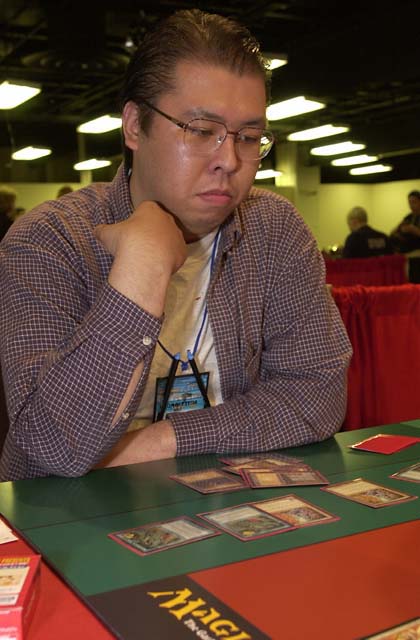 Olivier Ruel is a member of the very successful Black Ops team that placed sixth in New York. He's no stranger to singles competition, though, with two Grand Prix top eights to his name. He has drafted a R/G/w deck centered around powerful, expensive creatures. His opponent is two-time Grand Prix winner Kenichi Fujita, piloting a very solid Blue/White deck with many fliers and tappers. Two maindeck Crimson Acolytes are sure to give Ruel trouble.

Game one got rolling when Ruel used Tribal Flames to remove Fujita's Stormscape Apprentice, before he had free mana to power his Crimson Acolyte. Fujita played a Tower Drake and a second Apprentice, and Ruel answered with Voracious Cobra.

Soon Fujita was way ahead, using his tapper to control a Pouncing Kavu. He didn't have the means to stop a Serpentine Kavu, but had a healthy life cushion. He Opted into a second Crimson Acolyte, which let his tapper rule the green beast. This forced Ruel's hand of Ruham Djinn and Yavimaya Barbarian.

Fujita's next attack left Ruel at five, and he doubled up on Drakes to seal the deal. Ruel tried to rally, bringing a Pouncing Kavu, but Fujita's defenses rebuffed the attack. He even made a half-hearted attempt to Assault one of the Drakes, but he knew Fujita would protect it with an Acolyte, and conceded.

Ruel kept a two-land hand for game two, but stalled on his third turn. His fourth and fifth turns didn't turn up any more. He lost a Rage Weaver blocking a Lancer when, in his frustration over his mana issues, he didn't see that Fujita's Dream Thrush gave him access to white mana for the Crimson Acolyte's ability.

Fujita was likewise stuck, but at three land, and had two tappers in addition to the Lancer, the Acolyte and the Thrush. Ruel drew a third and fourth land, but his hand was filled with expensive monsters: Halam and Ruham Djinns, Kavu Climber, Pouncing Kavu and Serpentine Kavu.

Ruel found his fifth before Fujita drew his fourth, and Assaulted a Tower Drake while he was tapped out, then spawned a pair of Climbers. Fujita's hand was brimming with answers, but he hadn't the land to deliver. Even disregarding that, he had two Apprentices and an Acolyte. Two more Plains, and he could turn the tide.

They weren't forthcoming, and the in the intervening turns, Ruel built quite a force. Fujita couldn't conjure a defense fast enough, and was overrun.

Fujita got stuck at three land again in game three. He dropped Dream Thrush and Tower Drake, using the Thrush to disrupt Ruel's mana. Ruel cast Pincer Spider to stand in the way of the air force, and tried a Kavu Climber the turn after. Fujita's Exclude delivered the all-important second Plains.

Ruel made an Elephant with Battery, and swung with the Spider. Fujita Shackled it, and once again ruled the sky. After two turns of beats, he drew his sixth land, and took control of the land with a kicked Vodalian Serpent. Ruel burned away Fujita's fliers, but he had a Razorfoot Griffin in reserve. It dealt eight damage while Ruel drew lands and summoned fatties. Before he could swarm Fujita's defenses, he found his board swept by Wash Out. Fujita's creatures charged and Ruel conceded, but not before delivering a brutal elbow drop on the Griffin that bested him.