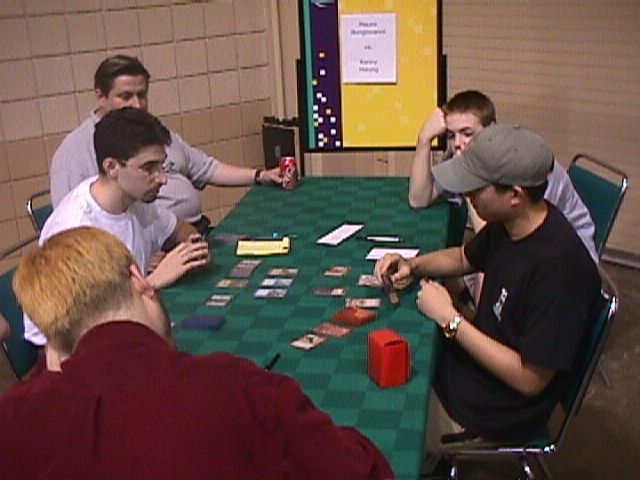 Mauro Bongiovanni vs. Kenny HsiungEntering round twelve Kenny Hsiung was riding an 8-2-1 record. A member of Team Egghead, the eighteen-year-old Hsiung was trying to break out and hit his first ever Grand Prix top eight. Standing in his way was a well-traveled Canadian, Mauro Bongiovanni. Having traveled to Grand Prix Boston and Washington D.C. with top twenty results, he looked to continue his remarkable consistency.

Kenny was running a solid Black Red deck that looked to beat down on his opponent early. While he was stalling the ground out, he would be able to ride the strong wings of the Stalking Bloodsucker to victory. Mirari, although considered by some to weak in the format, fit well into his deck, which was chock full of burn.

Mauro, on the extreme other hand was playing a deck that could be most likened to the Invasion Block Favorite, Blue Green Tempo. Sporting multiple Aven Windreaders, Nantuko Disciple, and Wild Mongrels, the deck looked to jump on the unaware opponent and deal as much damage as possible while all the while, riding Syncopates, Rites of Refusal, and Dematerialize to a strong finish. 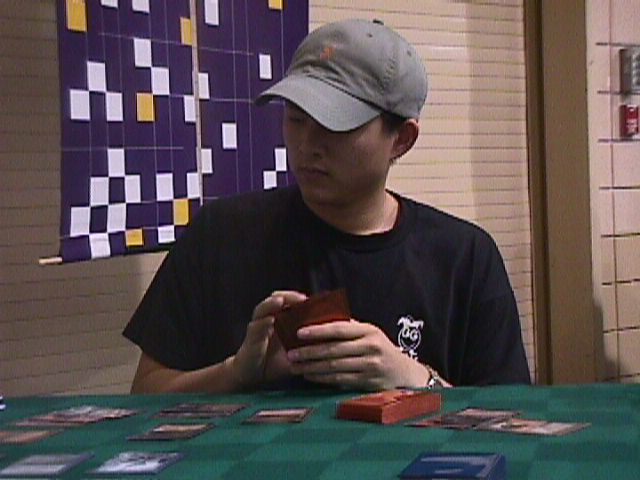 Kenny HsiungAfter winning the roll, Kenny decided to play first, both players kept their opening hands, and soon, the match was well under way. It started off like a tennis match, small volleys of lands being played, waiting for someone to make a mistake. Kenny blinked first, and attempted to cast a Junk Golem. Mauro Syncopated the artifact threat, and used his turn to resolve the first real pressure of the match, Nantuko Disciple. The insect was burned to a crisp with a Flame Burst, but Mauro had another bug waiting in his hand. After his newest threat resolved, Mauro past turn, and Kenny dropped the first bomb on his opponent. The sixth turn Stalking Bloodsucker seemed to mark impending doom for the Canadian. Undeterred, Mauro went along with all the phases of the game. Attacking with his Dreamwinder, it appeared as if the confident attacker was going to throw off the unsure Hsiung. Mauro was in danger of making game one his, but Kenny, and the strength of his favorite vampire, were too much of a match for this game.

At the start of game two, Mauro decided to draw first and allow him a chance to react to the powerful cards that his opponent possessed. Like the first, Bongiovanni drew first blood. His second turn Wild Mongrel was joined by a third turn Krosan Avenger, and the face smash party had begun. By the time Kenny had cast a blocking creature, he had already taken eight points of damage. Trying to swing back the momentum, the orb of desires, Mirari made its first appearance of the match. However, he still lacked blockers for the beating he was receiving. His life dropped at a rhythmic four points a turn, and his first full turn of Mirari was met with a Syncopate. His next play of Junk Golem was countered via Rites of Refusal, and he entered the unhappy scoop phase. 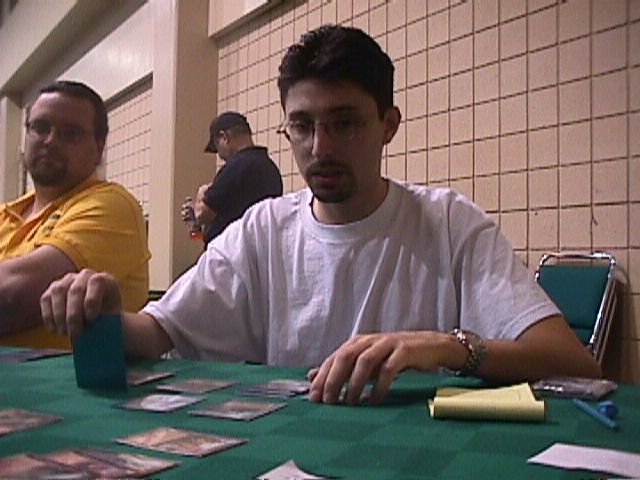 Mauro BongiovanniThe third and deciding game was blazing fast and if you blinked you were in danger of missing the action. Kenny started the third and deciding game of the match, with a third turn Sandstone Deadfall, which was answered by a Deep Reconnaissance from Mauro. Dirty Wererat started the clock against Bongiovanni, and when he answered with an Aven Windreader, the expression on the face of Kenny was markedly different. The wererat attacked one time, and joined by Mirari yet again. Mauro however, kept casting huge flying creatures, as his first Windreader was joined by a second! Kenny was able to buy himself a few turns with a Zombie Assassin and the Sandstone Deadfall. It however was not meant to be, Kenny drew his next card, scooped his permanents, and extended the hand.

2-1 Maruo Bongiovanni
Bongiovanni can clinch Top 8 with a win in Round 13.