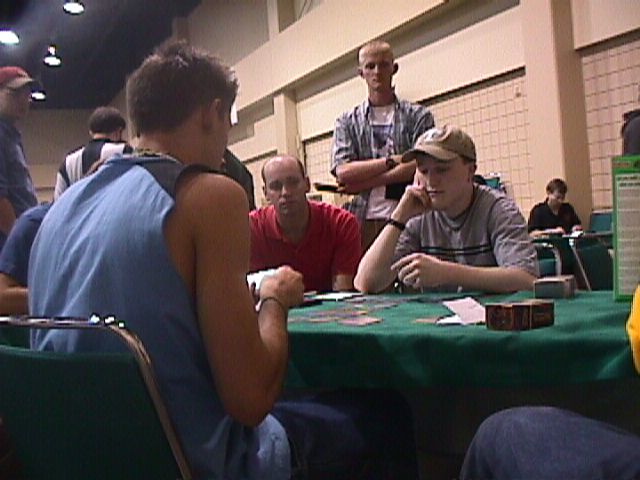 Matt Linde vs. Craig WescoeMatt Linde and Craig Wescoe are both familiar faces on the Pro Tour. Linde became famous when he stole the national championships away from Mike Long in 98. Since then he has been a consistent Pro Tour finisher. Wescoe is quickly becoming known as one of the games best deck builders. He recently was in the top 8 of GP Minneapolis.

Going into this match, Matt Linde was looking for a draw. Sitting at 18 Pro Tour points, Linde only needs two more to be "gravy trained" onto the next pro tour. While many players are anxious to get on the train, if Linde qualifies for San Diego on PT points it will actually qualify him for the next three Pro Tours. This is because only two points will fall off his total at each of the next two stops.

Linde actually did not have a lot to worry about as he had what is sure to be one of the all time best draft decks in the Odyssey limited format. His deck had five Firebolts and a Shower of Coals. Still Linde was not anxious to risk his next three Pro Tours on mana screw. Wescoe also had a strong deck, playing black/blue control with a lot of quality removal spells, great deck manipulation, and a Stalking Bloodsucker. 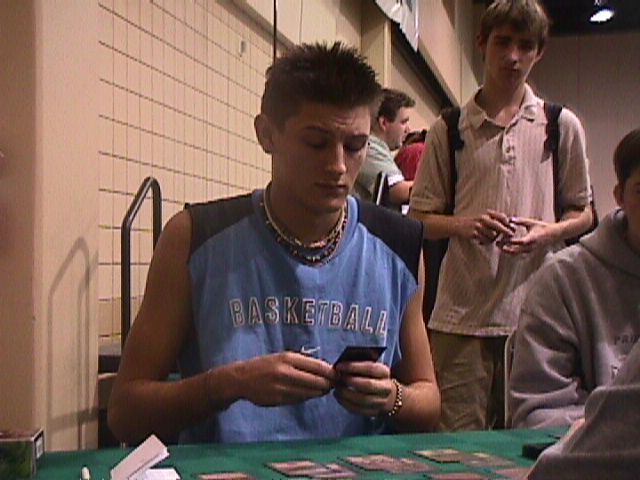 Matt LindeWhen the players sat down Linde seemed upset and I only later found out that Wescoe had just been refused the draw. Both players shuffled up and Linde won the option to go first. Linde had a creature low draw and was only able to play a Dwarven Recruiter early on. His amazing removal kept Linde's side of the board clear throughout the early game though. Wescoe lost a Puppeteer and a Dusk Imp to Linde's firepower before finally getting to creatures that would stick. He dropped a threshold enhanced Frightcrawler and a Whispering Shade that Linde was less capable of removing. Wescoe was still stuck though since Linde was still at 20 while he was only at 12. He had to finish Linde before the mass amounts of burn in his opponent's deck could finish him off. Linde kept Wescoe from getting in the game by playing Thermal Blast on the Shade, and then Firebolt on it on his turn. This cleared the way for his creatures. He played a Squirrel Mob and Reckless Charged it to knock Wescoe down to a lowly 8 life. Wescoe tried to stem the tide by playing Morbid Hunger on Linde's Recruiter and Squirrel Mob, but Linde just had too much direct damage and Wescoe soon fell to zero.

Down a game, Wescoe offered Linde the draw if he still wanted it. Linde refused at first but as he was shuffling up to play game two appeared to change his mind and then agreed to the draw that should qualify him for most of the next year.