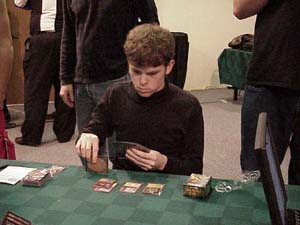 Dan Clegg won the die roll but did not cast a spell over the course of the first two turns. Vienneau pulled a Gaea's Might out of his opponent's hand with a Rat, then summoned a Morgue Toad. Clegg was holding those creatures off with a Pincer Spider, but failed to play a fourth land. The Spider chump-blocked a Mire Kavu, and Clegg finished it off with a Zap. The cantrip revealed a much-needed fourth land, but Clegg still did not have a source of white mana. The only castable spells in his hand were Scorching Lava and Magma Burst.

Vienneau busted out with a team of mediocre creatures. He's got a pair of Morgue Toads, a Rat and a Shivan Zombie, which got removed via Scorching Lava during his next attack step. Clegg finally drew a fifth land (a Plains) and cast a Magnigoth Treefolk. Vienneau alpha-struck, losing a creature in combat and bringing Clegg down to ten life. He then recovered and recast the Mire Kavu.

Clegg was well on his way to stabilizing though. He summoned an Ancient Spider. With a 2/5 and a 2/6 creatures in play, Vienneau had no chance to punch through unless he could draw some black removal. Although Vienneau had only a land and a Caldera Kavu in hand, he attacked with all his creatures, representing a Soul Burn. Clegg blocked Mire Kavu and a Toad, taking three points of damage and killing off one of the Toads. After combat, Vienneau summoned the Mire Kavu.

Clegg was in a bit of trouble, despite holding a handful of broken cards. Still, provided Vienneau did not draw anything really good, it should be an easy victory for him. Clegg cast a Thornscape Battlemage with kicker, taking out the second Toad. Vienneau did not attack with his Caldera Kavu. He cast a Lava Zombie instead, gating Ravenous Rats. The Rats took out Clegg's Eladamri's Call.

On his turn, Clegg tapped four mana and put two lands in his graveyard. "That's gonna suck," commented Vienneau. Indeed it did. Lava Zombie and Caldera Kavu were now both in the graveyard. Clegg finally went on the offensive. He enchanted the Treefolk with Armadillo Cloak, and Mountainwalked for four. 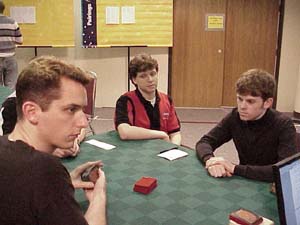 Vienneau used up a Mire Kavu and a Scorching Lava to finally take out the Spider. A few attacks later Vienneau, now without any non-land permanents in play, packed it up.

Each player had a good start in the second game, with Shivan Zombie and Benalish Trapper entering play on turn 2. Vienneau kept the pressure up with Caldera Kavu and Firescreamer.

Clegg was holding a Fleetwood Panther, but it could not block any of the creatures Vienneau was playing and survive, so the California player could bide his time - but Clegg chose that his late-game plan is better than Vienneau's anyway and traded the Panther in combat for the Firescreamer. Magma Burst with kicker followed, taking out the remaining two creatures on Vienneau's side of the table and stabilizing the board. Vienneau summoned a Phyrexian Reaper, and Clegg replayed his tapper.

Clegg failed to draw a creature for several turns, so Vienneau was getting through with Volcanic Imp. Clegg finally gave up his Zap to cycle a card and deal one point of damage to Vienneau. Still no creature, but he drew Tribal Flames which allowed him to once again stabilize. Vienneau summoned a second Imp, and Clegg drew an Explosive Growth, making the option of enchanting his tapper with Armadillo Cloak slightly more attractive. Still, he waited.

Down to seven life. Clegg finally went for it, Cloaking up Benalish Trapper. Vienneau was ready with a Terminate, so the two players had to play Game 3 in the remaining fifteen minutes.

Despite having little time left, Clegg asked the judge to shuffle his deck, after Vienneau was done shuffling it. "Vienneau manascrews his opponents somehow every time," commented Clegg. His judge-shuffled hand wasn't amazing either, as it only included two lands and he failed to draw more over the first few turns. Although Clegg failed to play a third land, he summoned a Quirion Elf, naming white. Vienneau had an opportunity to cast Terminate on it and try to manascrew his opponent, but chose not to. Instead, he Terminated an Ancient Spider that came out a turn later. 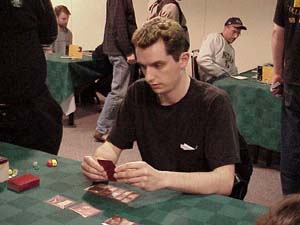 Vienneau gained some card advantage by casting Ravenous Rats, then followed it up with Mire Kavu. He then gated the Rat with Lava Zombie and recast it, gaining further advantage. Clegg traded a Stone Kavu in combat for Mire Kavu, then used Thornscape Battlemage to take out the Rat. Vienneau enchanted Lava Zombie with Sinister Strength, attacked for seven, and summoned Caldera Kavu.

Clegg summoned Skizzik and traded it in combat for Caldera Kavu, but it still left a very large Lava Zombie to deal with. Clegg was able to chump block it for several turns. He drew another creature and double-blocked the Lava Zombie. He only creature left on the table was a Viashino Grappler, but Clegg was down to three life. He top-decked Lava Burst, taking out the Grappler. Vienneau was finally out of gas.

Clegg played a Magnigoth Treefolk, and Vienneau peeled a Phyrexian Reaper off the top. Treefolk could not block it and survive. Clegg would have been able to run away on the life total with the Armadillo Cloak he was holding, but he failed to draw white mana. For the first time I've ever seen, Reaper's ability actually made a difference as it took out the Treefolk. A turn later, and with two minutes left on the clock, Clegg lost the game.