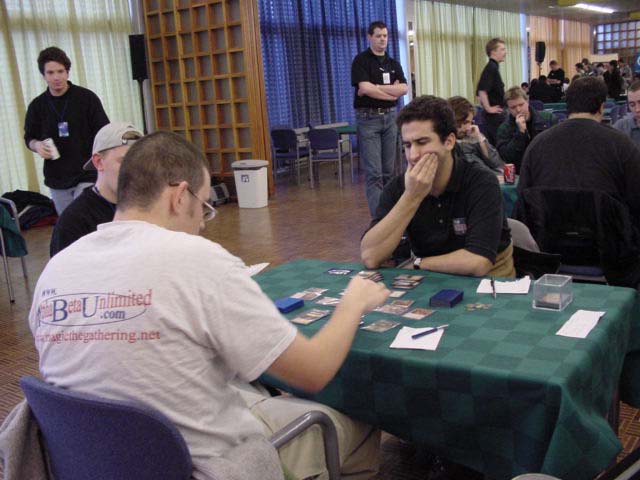 This match was important, as the winner of it would only need one more win to probably make Top 8, and the loser might not be able to make it. Michael had a red/white/ black deck, and Chris had a Green/White/Blue deck, featuring multiple tappers and two Blurred Mongooses!

Michael won the dice roll and opted to play first, although he was forced to mulligan his opening hand. He started off with a Benalish Trapper, Chris topped it immediately with a Blurred Mongoose which is unaffected by the Trappers ability. Chris' Samite Archer that he played on turn three got Shackled, and the Blurred Mongoose brought Debard down to 16. On his turn four Chris played a Llanowar Knight and a Benalish Trapper, although the tapper immediately received a Shackles. The players began to trade damage, as Michael enchanted a Slimy Kavu with a Strength of Unity (prompting Benafel to say, "That's some bad stuff you've got over there.") The Kavu hit home for five three times, bringing Chris to four, Michael being on six. Michael did not have enough blockers to deal with all of Chris' attackers, however, so when he drew an Explosive Growth, he was able to give a Nomadic Elf +5/+5 for the win.

Michael also started in game two, hitting Chris with a Rat and causing him to discard Glimmering Angel on turn two. Chris made two tappers: a Benalish Trapper, and a Thornscape Apprentice. He Harrowed to give him early access to all his colors of mana, and played a Blurred Mongoose. Michael had a tapper out, but of course it was unable to deal with the Mongoose. Chris went on the offensive for two turns, using his tappers to stop Michael from blocking, playing a second Mongoose, and bringing Michael down to 12. Meanwhile, Michael was only able to make a Crosis' Attendant. When Benafel put down a Samite Archer, Debard was on a fairly leisurely clock, having at most twelve turns to do something. Chris continued to attack by using his tappers to lock down Michael's blockers each attack phase. With Michael on eight, the American summoned a Glimmering Angel, and with Chris having one Island in play to make the thing untargetable, Debard was unable to deal with the flyer, and had to concede two turns later.