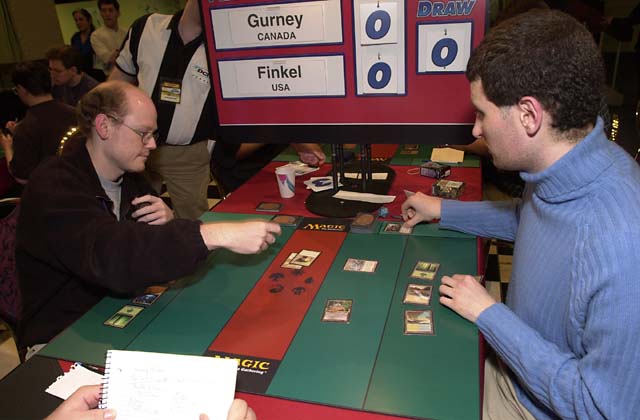 By now, few fans of professional Magic haven't heard of the exploits of current World Champion Jon Finkel. Many fewer would have heard of Michel Gurney, who has attended five Pro Tours, but only has a best finish of Top 96 at Chicago '98. He may be outclassed in terms of Pro Tour records, but today, they have identical match records, and are on equal footing.

Game one, Finkel opens with a Llanowar Knight, Sunscape Apprentice and a Benalish Lancer without kicker. Michael played his own Lancer, and then played a Glimmering Angel. The Angel felt naked, so Michael enchanted it with a Strength of Unity, making it a 5/5 and possibly untargetable. Finkel was in serious trouble. The Rampant Elephant that Finkel summoned on his next turn wasn't of much help, either. He needed to have some of that Finkel magic that has made him a legend. He needed an Armadillo Cloak, and he needed it this turn. So of course, being Finkel, he drew it. The Armadillo Cloak dropped onto the Rampant Elephant and the fattened creature entered the red zone, gaining Finkel some much needed breathing room. Finkel beat down the door again and again with the Elephant, and finally cast Canopy Surge with the kicker, killing Michael. 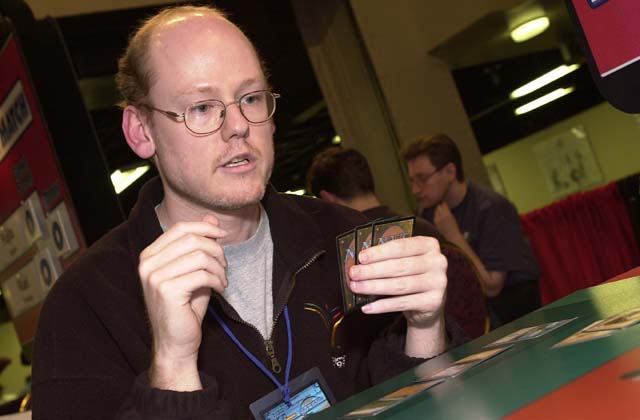 Finkel prefers to remain extremely businesslike and professional at all times. It seems to work for him, though. His poker face is hard to read, and even when he's in trouble, you can't tell. In Game Two, reading his face didn't give away he fact that his draw was atrocious. He played one spell the entire game, a Might Weaver.

Finkel had to mulligan to start game three, and his opening hand was less than stellar. He opened with a Benalish Trapper and a Sunscape Apprentice and then sat there for several turns, doing nothing. He had the one Island in his deck along with two plains, and with a hand full of green cards, he was powerless to mount a reasonable defense. Gurney cast a Metathran Transport that he eventually enchanted with a Strength of Unity, and then played a Benalish Lancer with kicker. Finkel could only summon a Benalish Lancer without kicker. The Trapper was keeping Finkel alive, but when Gurney tried to enchant the Trapper with a Shackles - but the Trapper got put back on top of Finkel's deck with the Sunscape Apprentice's ability. On the next turn Finkel recast his Trapper, and a Might Weaver. He could live another turn, assuming Gurney didn't do anything funky, like use a Barrin's Unmaking to return the Trapper to his hand. Turns out, that is exactly what Michael did. With an Armadillo Cloak on the kicked Lancer, and a very fat Glimmering Angel, the game was over.