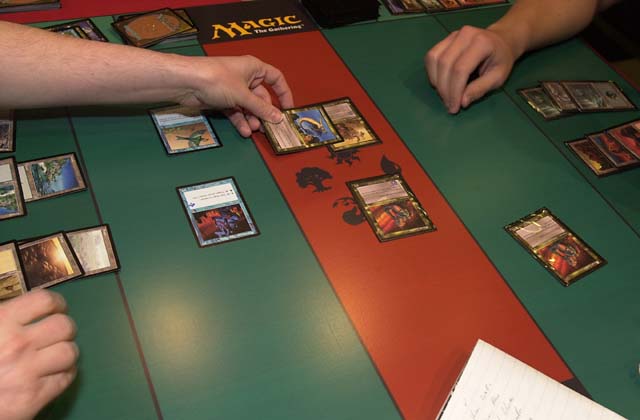 Michael Pustilnik and Svend Sparre Geertsen are both at 9-1-1 record right now. A 2-1 finish in this draft pod will guarantee either of them a slot in the Top 8.

Pustilnik drafted a solid B/U/w deck with three Faerie Squadrons, a Rout, and a number of other goodies. Geertsen drafted a typical B/R deck. Although his creatures are mostly solid, his removal is lacking, as not enough good removal spells were opened during their draft.

Pustilnik is forced to mulligan his opening hand, then kept a one-land hand rather than go down to five cards. Geertsen's opening hand is excellent. He plays a turn 2 Shivan Zombie, followed by Vicious Kavu.

Despite beginning the game with only one land, Pustilnik proceeds to top-deck land like a pro. He played Stormscape Apprentice, then Exotic Curse to get rid of a Trench Wurm, then Ravenous Rat to take out Geertsen's only remaining card in hand - an Alloy Golem - and trade in combat for Urborg Emissary.

In the meantime, Geertsen continued to reduce his opponent's life total with a pair of Shivan Zombies. Pustilnik drew and cast a Faerie Squadron, looking as though he finally stabilized, but Geertsen peeled a Lightning Dart off the top of his deck to continue the attack.

Halam Djinn hit Pustilnik once, but a Recoil was able to send it back to Geertsen's empty hand. Unfortunately for Pustilnik, he still hadn't found a way to deal with the second Shivan Zombie (he used his tapper to stop one of them from attacking each turn). Pustilnik chump-blocked with a Dream Thrush, failed to draw another creature, and lost the game. 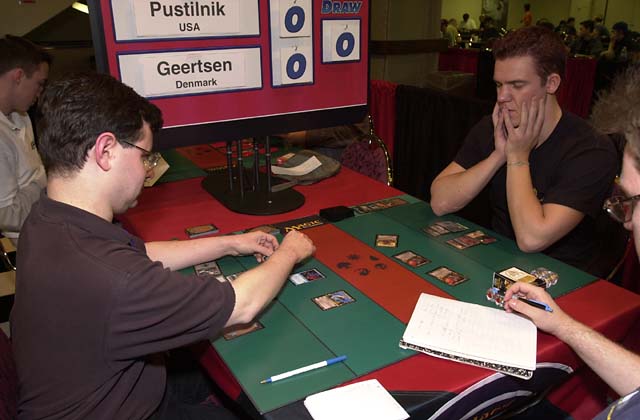 Pustilnik played a Phyrexian Infiltrator and proceeded to attack with it for a few turns, removing Geertsen's creatures along the way. Geertsen used Suffering to destroy his opponent's only Island, then cast Hypnotic Cloud to take out a bunch of good cards, but he still did not have any offense on the table.

Creatures finally began to enter play on Geertsen's side of the table at this point. He cast Alloy Golem and a kicked Kavu Aggressor. Pustilnik left the Infiltrator untapped, ready to block, put damage on the stack, then steal an Alloy Golem - but Geertsen had other plans, using his Stun on the Infiltrator to attack for 8. Pustilnik announced this to be the best Stun ever, but refused to simply trade his Infiltrator for an Alloy Golem, going down to 8 life points instead.

Geertsen summoned yet another creature. During his next attack step, Pustilnik cast Rout, clearing the board.

Over the next dozen turns or so, the two players traded removal and creature spells, neither really able to hurt the other significantly. Pustilnik began to gain an advantage, lowering Geertsen's life total to 7 with a few creatures now in play.

Geertsen was forced to cast Breath of Darigaaz with kicker, going down to 3 life and leaving Dream Thrush as the only creature in play. Pustilnik used the Thrush to get another Swamp, then burned his opponent out with Soul Burn.

Geertsen boarded in a Tainted Well, further trying to meddle with his opponent's mana. The stakes were now higher. Finkel lost his match, so the loser of this match might be forced to play against him during the following round.

This time it was Geertsen's turn to mulligan. His new hand was keepable but far from exciting. Geertsen could not muster an early offense, but much like his opponent in the first game, he drew into the other lands he needed very quickly. 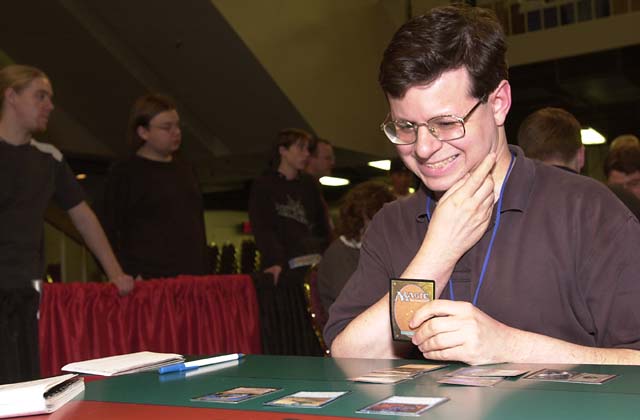 Marauding Knight came to play as a 4/4, but Pustilnik had a number of answers. His Phyrexian Infiltrator needed just one more Island to trade with the Knight, and he cast a Stormscape Apprentice to go along with it.

Geertsen was able to kill the Apprentice and deal some damage with the Knight, till Pustilnik finally managed to trade it in combat for the Infiltrator (once the Knight switched sides, it no longer had +2/+2, and died to combat damage from the Infiltrator).

Pustilnik was down to six life, and Geertsen was holding Breath of Darigaaz. All he needed now was to draw a way to deal two more damage.

Pustilnik summoned a Faerie Squadron, then Vodalian Zombie and a Riptide Crab - preventing Geertsen from being able to deal any more creature damage. Geertsen's last draw was a Halam Djinn - casting it allowed him to attack with three creatures and finally deal the few points of damage he needed - however, he had no mana left over to cast Breath of Darigaaz, and died to Pustilnik's two Faerie Squadrons on the following turn.