Share Article
Share Tweet Share
a sea of Big Red and the occasional Affinity deck, Herzog's mono-green beatdown deck stands out as both unique and entertaining. Sporting a phenomenal number of headaches for Affinity, Herzog so far is instead running into Big Red opponents instead (not surprising given the number of Big Red decks out there today). Herzog lost to Big Red in the first round to start the day off so he's looking for revenge at the expense of Gary Wise.

Herzog started out doing exactly what his deck expects to do, making Forests and using them to make guys. His Viridian Zealot led the charge, but right into the graveyard at the hands of a Gary Wise Spellbomb of the Pyrite variety. Turn 3 went better though in the form of a Tanglewalker that was looking very sexy thanks to the Darksteel Citadel on the other side of the table (or maybe it's the art). Turn 4 got even better when Fangren Firstborn joined in the festivities. Mr. Wise tapped out to make a Simulacrum that had to be feeling even more solemn than usual, and then things got even more funny on Herzog's side of the board as Sword of Fire and Ice came into being and was promptly scooped up in the hammy fist of the Firstborn. Swing for 10, kill your guy, my guys get bigger. Not bad. Gary tapped out next turn for Arc-Slogger but this one was already over. The clocks at this point had each elapsed maybe two minutes. 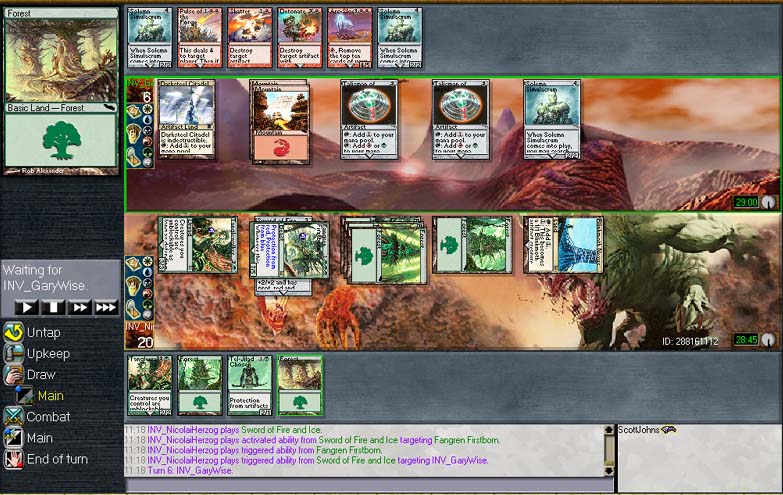 Think that one was quick? This one ended even faster. Viridian Zealot again made an appearance turn 2, and again met a burn spell and headed off to the dumper. This time it was the Wise One with the sick start, playing turn 3 Seething Song+Arc Slogger. Hi there! Herzog didn't have anything remotely close to being able to handle that, and it was off to game 3 after what generously may have been another 90 seconds total or so.

Herzog was back on the play but had to mulligan to 6, but he felt a lot better when Gary had to mulligan down to 5. Herzog had turn 2 Copper Myr this time followed by a turn 3 Troll Ascetic. That looked great for at least 6 seconds, right up until Gary played out land number three and did a nice re-run edition of his previous hit "Hi, I'm a turn 3 Arc-Slogger." Being on the play, at least Nicolai got to try and play this time however, dropping out Sword of Fire and Ice but lacking the mana to equip in the same turn. The Troll did its thing and charged in, but Gary got to untap, slog the Myr (stranding Herzog at just two Forests for mana) and swing in, followed by a Pulse of the Forge to Herzog's increasingly damaged head. The Troll untapped, found a Forest to help it grab up that Sword, and swung gamely in. None of that mattered in the slightest though, as Slogger came in again for another 4 with 4 red mana available to burn out the rest of Herzog's life.