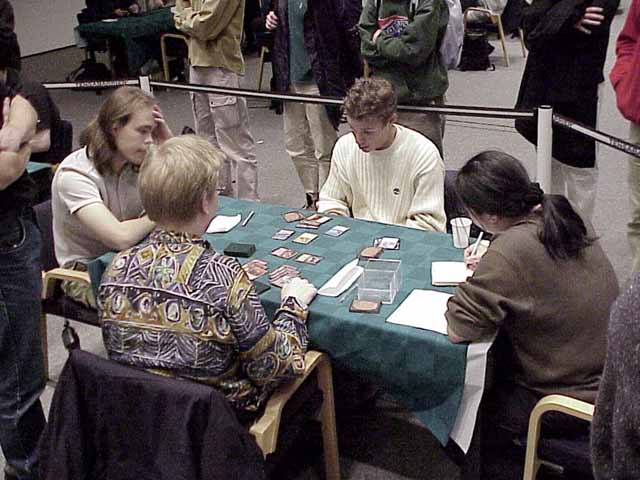 In the twelfth round, Noah Boeken from the Netherlands faced Tomi Walamies from Finland. The two players were both at 28 points and needed one more win to make the top 8.

Noah chose to play and started by playing two islands and a plains. Tomi got out a turn two Shivan Zombie and attacked, and then he attempted to play a Viashino Grappler, but it was Absorbed. Noah then cast a Rainbow Crow that blocked the Shivan Zombie and cleared the table, but Tomi had an Ancient Kavu as well and he cast it and continued attacking. The Finn also got out a Phyrexian Slayer.

During his sixth turn, Noah played Reviving Vapors. He took a Galina's Knight and gained two life, but they were quickly lost again when Tomi cast a Halam Djinn and attacked for seven with the Djinn, the Slayer and the Ancient Kavu. He attacked again the following turn, but Noah then used a Spinal Embrace to steal the Djinn. Blocking the Kavu, he had two creatures less to worry about.

But Tomi had tricks as well. He cast a Crypt Angel to return the Djinn to his hand, and when Noah played a Galina's Knight and then a Wash Out on black to buy some time, Tomi got to play the Angel yet again, this time getting a Shivan Zombie that he played. Noah got out a Ruham Djinn, but the Angel and the Zombie took him down to four life and a Soul Burn for five finished him off.

The second game wasn't really exciting. Noah played a turn two Sky Weaver that went into Mourning, and then he dropped a turn four Kangee, Aerie Keeper. Tomi on the other hand, stalled on two lands and soon started getting low on life.

Tomi used a Pain just not to have to discard. He then finally drew a third land and played an Urborg Phantom. But it didn't help a lot, and soon, he was at six life. In an attempt to survive an extra turn, he tried to Soul Burn the Sky Weaver, but it was Absorbed - and so he scooped.

Tomi chose to play first in the last game. Both players got a rather slow start, Noah mulliganed once as well. So Tomi got to play the first creature, a Phyrexian Slayer.

Noah answered by playing a Storm Crowe that he traded for the Slayer. The Dutchman then played a Crosis's Attendant as an answer to Tomi's Crypt Angel, and when the Attendant got Wings of Hope attached to it, it changed the board situation a lot. Tomi couldn't attack without losing his creatures, so he simply played a Mourning on the Attendant to make it a bit smaller.

Noah, suddenly more in control, played a Reviving Vapors and took a Wash Out. He then cast Sunscape Master, but Tomi Soul Burned it before it recovered from summoning sickness. Noah then got out a Ruham Djinn, while Tomi cast a Darigaaz's Attendant. The Djinn came over for a visit during Noah's following turn, and Tomi blocked it with the Crypt Angel - Noah had simply forgot about the Angel's protection from white. The Finn then returned the Mourning to his hand, and with black and white tied for being the most common colour on the table, the Djinn just died. But it was soon replaced by a Vodalian Serpent with kicker.

None of the players had a way of getting through the other player's defense, so nothing much happened during the following turns. Tomi put the Mourning back on the Attendant, and he also played a Shivan Zombie and a Trench Wurm. Then, during turn twelve, he sacrificed a Sulfur Vent and tried to Soul Burn the Vodalian Serpent for six - but Noah had drawn his Absorbed and chose to gain three life instead. Tomi then ran out of steam. He drew and played a lot of lands while Noah played an Opt, a Tower Drake, a Sky Weaver and a Probe, adding to his offense as well as improving the card quality of his hand.

Tomi finally started drawing something other than lands, and he cast a Darigaaz's Attendant and then a Viashino Grappler. But Noah had better cards than that. He played Spinal Embrace, stole the Crypt Angel, attacked with it and then sacrificed it to gain three life. He then started attacking with his Tower Drake, and Tomi opted not to block with his Slayer as Noah had plenty of mana to pump the Drake. So the Finn Suffering'd the Dutchman's swamp and played draw go for a couple of more turns while the Drake slowly reduced his life total.

Eventually, Tomi drew a Firescreamer that he cast. But Noah got his Stormscape Apprentice and things looked good for him except from that he didn't really have a lot of cards left in his library. He blocked the Firescreamer with a Sky Weaver, and when he Prohibited the Recovery of the Crypt Angel, things looked bad for Tomi. Kangee, Aerie Keeper put further pressure on the Finn.

Tomi continued taking damage. He cast Ancient Kavu and declared an attack, but the Phyrexian Slayer was tapped down. Noah then Shackled it and left the Finn without any blockers in the air. Wash Out on red also sent a lot of creatures back to Tomi's hand, although it wasn't really significant.

Tomi had one last chance of survival. Holding a Soul Burn, he could gain some life and try to stay alive until Noah ran out of cards. He returned the Mourning to his hand and then cast Soul Burn for six on the flying Attendant. But Noah simply sacrificed it, at 27 life he didn't really worry about the mana burn. Mourning on the Sky Weaver didn't help either, as Noah had a Dismantling Blow in his hand. The Dutchman also cast a Benalish Trapper, and, drawing nothing, Tomi scooped.