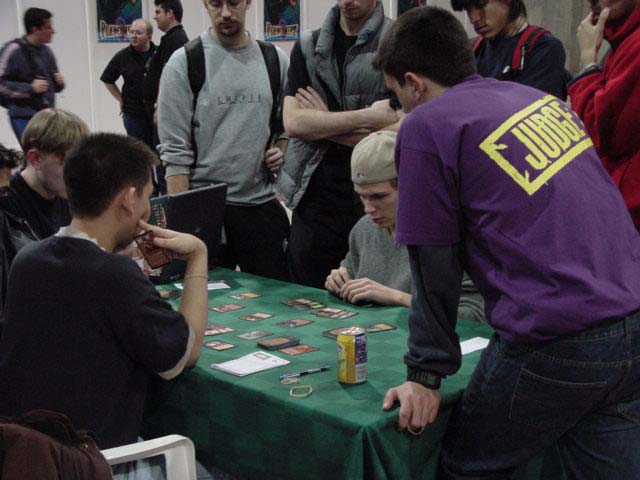 Lucien decided to go first in game one with both players needing to win to stay in the running for the top eight. Bui played the first creature with a Morgue Toad, which attacked past Noah's Caldera Kavu. Boeken's hand was broken - two Assault/Battery, a Terminate, a Zap, and a Strafe.

Bui played a Slimy Kavu, and Noah attacked with the Caldera Kavu. He decided to pump it up, and then used Assault on Bui's Slimy Kavu. Lucien had removal of his though, killing the Caldera Kavu with a Tribal Flames, and attacking again with the Morgue Toad.

Noah played a 3/3 Elephant Token, and Bui put Keldon Mantle on his Toad to make it into a Regenerator, but it was Terminated. Bui then cleared the board with a Breath of Darigaaz, putting him on 10, and Noah on 14. He played a Phyrexian Bloodstock to block Noah's Hooded Kavu, but that creature met with a Terminate.

Lucien was now out of creatures, so he just played a Power Armour, and Scorching Lava on the Hooded Kavu. Even when he did draw another creature - a Mire Kavu, Noah had another removal spell with Shivan Emissary.

He only had a Zap left now as a removal spell, so he couldn't kill Lucien's Firescreamer straight away, but it did allow him to trade it for a Quirion Elves. A Lava Zombie was played by Noah, returning the Shivan Emissary to his hand, yet Lucien had yet another Breath of Darigaaz. However, this put him down to 2, and he had no way of removing the Nomadic Elf which Boeken summoned on his next turn. 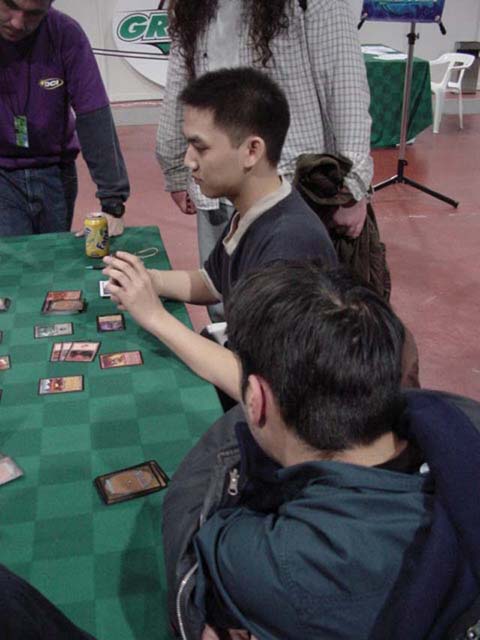 Lucien was starting in the second game, although he was forced to take a mulligan, and was happier with his second draw. Nothing but land was played for the first four turns by either player, and Noah was goaded into Zapping his opponent in order to try and draw a Forest.

He did so, which meant that he could start casting the Harrow and other green cards in his hand. Meanwhile Lucien had finally gotten to enough mana to play a Duskwalker with kicker. Noah had nothing in hand that could deal with this, as he had a Shivan Emissary and Agonizing Demise as his only removal cards.

He did play a Thunderscape Apprentice and a Thornscape Master, though, but they couldn't block the Duskwalker. Lucien added an Ancient Kavu and attacked Boeken down to 17. The Kavu wasn't that much of a problem for Noah with a Shivan Emissary, which he summoned then attacked Lucien to 17.

Bui played a Caldera Kavu, which Noah removed with a Terminate. His attack then reduced to 12, as Bui killed the Thunderscape Apprentice with a Lightning Dart. 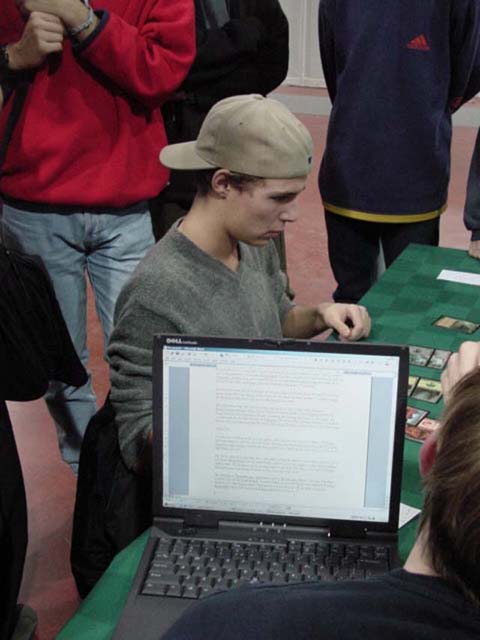 A Callous Giant proved to be a liability for Bui when Noah cast Agonizing Demise on it, and his attack brought Bui to 5. Noah meanwhile was on 11, from three hits with a Duskwalker, but it looked like the Minion would be staying back to block for a while.

This wasn't the case though, Lucien put a Maniacal Rage on his Duskwalker, and attacked. Noah topdecked an Assault, removed Bui's Slimy Kavu blocker, and attacked with the creatures. He had a Gaea's Might, which was enough to kill Bui.