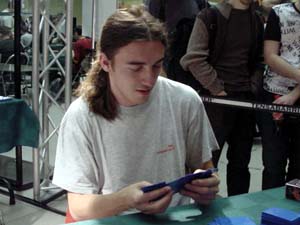 Kai:"Boarding out lands again?"
Olivier"Thats what I do every round and still get mana flooded"

It seems Olivier just boarded out City of Brass earlier in the tourney versus a goblin deck. Olivier is piloting a green-black deck while Kai is with Affinity and both player have to win out to top 8.

They both keep their hand and Olivier has second turn Vine Treillis while Kai has a Frogmite, a Ravager, a Skullcamp and a Welding Jar in play by turn two. Olvier taps four mana on his next turn then pauses.

Kai: "Want me to pick one at random?"

Olivier finallychoses to play a second wall and an Oversold Cemetery.
Kai equips his Frogmite, sacs it to the Ravager, and plays an Enforcer as well as a Chromatic Sphere. Olivier has the mana to cast a Baloth and equip it with his own freshly cast Skullclamp. Kai plays a Disciple of the Vault, another Frogmite and a Thoughtcast on his next turn and trades his Enforcer with Olivier's Baloth.

Olivier plays a morph which gets a smile from Kai then starts thinking again...

Olivier just equips his morph and says go.
Kai adds a second disciple, and has double Shrapnel Blast for the kill, sacrificing all his other artifacts to his Ravager. It turns out Olivier's morph was a Bane of the Living and he could have unmorphed in response to the second Disciple but then, Kai needed to have both Blast to kill Olivier who was on 22 lives before that.

Olivier: " I always beat Kai, but usually, its cause I have bad matchups."

Olivier keeps his hand while Kai has to paris his no lander.

Olivier: "You have to believe in your deck, dont look at your hand and just say I keep."

It turns out Kai's hand is actually decent.

Kai: "Of course it's good, Olivier is a master."

Olivier has a turn three Wood Elves followed by a Solemn while Kai has turn one Worker, turn two Sphere and turn three Thirst for Knowledge. Kai then gets out a Worker, a Disciple and an Hoverguard on his following turn while Olivier plays a second Solemn and a Bird. 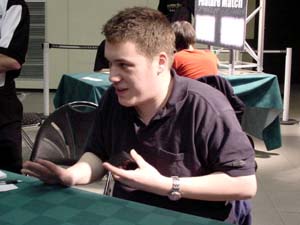 Olivier agrees but their respective deck fail to deliver and Olivier gets a Symbiote to get even more lands. He then adds a third Solemn while Kai topdecks a Ravager that seems pretty good with this Disciple out with nine artifacts out, Olivier being at eleven lives. But Olivier has his own topdeck... a Skullclamp! He sacs his Bird and his Wood Elf only to play another Bird and sac it as well then plays a Baloth, a Bird and a Treillis.
Kai: "Comooooooooooooooooon Disciple."
Olivier: " That would be a good choice."

Kai has a Thirst, and doesnt draw a Disciple but a Shrapnel Blast which is enough to kill the Frenchman.

I asked Olivier if the matchup is usually good and it seemed it should be ok but Kai's Somber Hoverguard and Thirst for Knowledge seemed to be too much for him to handle.