For those who remember, Ong had managed to fight his way through the single-elimination last minute trials in order to earn his three byes with his trusted GoMar deck. Today, he is using exactly the same deck, card for card, and is now standing at 8-3 and on the bubble for the Top 8. His opponent, David Chua is well known to be just a casual player, who had only placed in one Top 8 in the Trials that were held over the past two months. Suddenly, the casual player now found himself mired in pressure as he too is playing to stay in contention for the Top 8. Nonetheless, his relaxed composure never fell as he found the time to tease and torment this poor reporter. 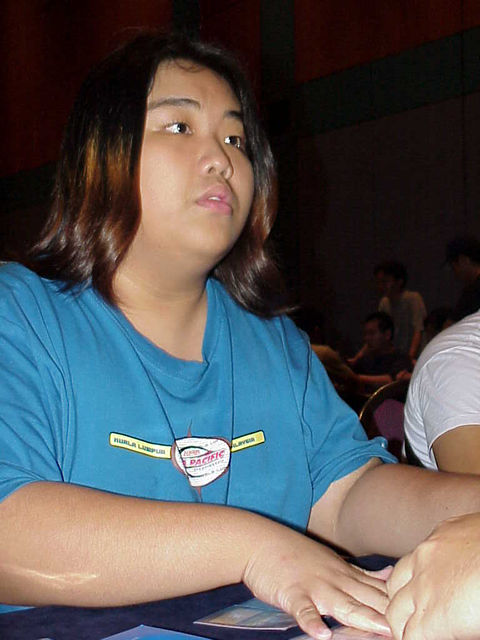 Ong kicked off the first game with a second turn Meddling Mage, naming Fire/Ice. Chua then put a Nightscape Familiar in front of it, and Ong Vindicated it before Chua had the opportunity to regenerate it. A fourth turn Fact or Fiction gave Chua the opportunity to split Disrupt, Absorb, Spectral Lynx and two Coastal Towers. Ong chose to take the two Towers and the Disrupt. Obviously forgetting the fact that he had just given Ong a Disrupt, Chua attempted his own fourth turn Fact or Fiction. Needless to say, Ong Disrupted it.

Meanwhile, the Meddling Mage had already paid four visits to the red zone, each time scoring a hit. Chua held a Prophetic Bolt in his hand, but couldn't draw the fifth land needed to cast it. When he finally drew the much-needed land, Ong had almost enough land to threaten three counterspells. He still tried for the Prophetic Bolt, which Ong Undermined. Chua dropped down to five life.

Now the lands started to come. Drawing a mountain, Chua's hand was beautiful: three Undermines, two Fire/Ice and an Exclude. Unfortunately, he had no way to rid himself of the Meddling Mage, which had so conveniently named "Fire/Ice". 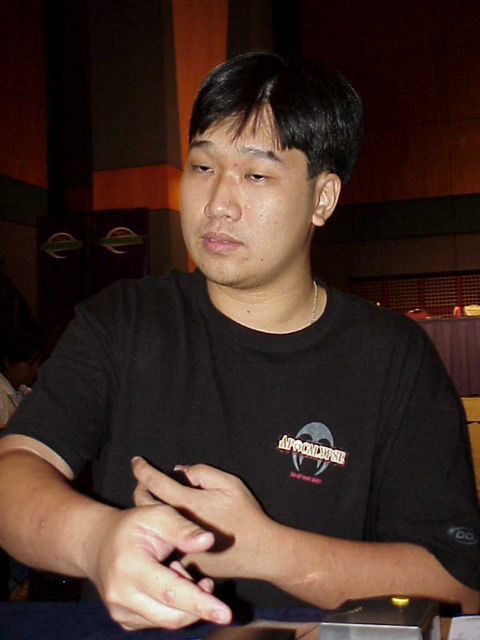 The Meddling Mage visited for two more points. Chua dropped down to three.

Chua attempted a newly drawn Nightscape Familiar, which Ong tried to Exclude away. Still thinking on whether to use one of his three Undermines, Chua eventually decided against it, and Excluded his own Nightscape Familiar, both to dig deeper into his deck for answers, and to deprive Ong of the card he'd draw from his own Exclude. However, when another end step Fact or Fiction from Ong revealed a Spectral Lynx and two Dromar's Charms, Chua decided that the best decision was the split the piles into two Dromar's Charms and Spectral Lynx-Dromar's Cavern and Tsabo's Decree. For obvious reasons, Ong took both Charms.

Next turn, Dromar, the Banisher in person (or is that in dragon?) finally convinced Chua that the game was over.

Ong had a plan for the next game. He rotated his creatures, taking out the Dromar, and all four Spectral Lynx, in addition to two Vindicates, two Tsabo's Decree and a Fact or Fiction in exchange for 4 Galina's Knights, 2 Urborg Shamblers and 3 Gainsays. Chua took out a Lobotomy, an Exclude, an Urza's Rage and two Recoils. He brought in four Gainsays and one Obliterate. 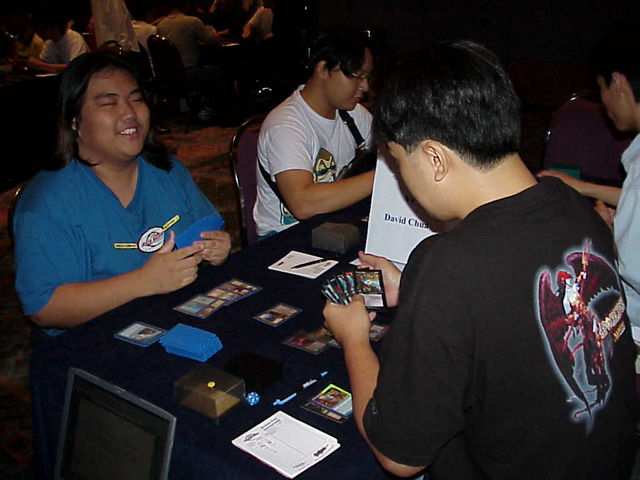 Chua started the second game with two nonblack lands. On his third turn, it became apparent that he suffered the fate that many players face in Invasion Block Constructed- manascrew. Ong capitalized on Chua's misfortune with a fourth turn Urborg Shambler. When Meddling Mage tried to come into play, Chua held a Gainsay, but Ong called upon Dromar's charming tricks and the Meddling Mage came into play, naming Urza's Rage. Chua's only option to buy some time while Ong was tapped out was to Repulse the Urborg Shambler, which reentered play on Ong's next turn. When Chua then tried to Prophetic Bolt the Urborg Shambler, Ong Disrupted it, and then followed up with a Galina's Knight.

Now Ong has Galina's Knight, Meddling Mage and Urborg Shambler in play, facing absolutely no opposition from an opponent who's at three life. There aren't many cards in this format that would get Chua out of this sticky mess, although Balance with triple Pyroblast backup would just about do the trick.