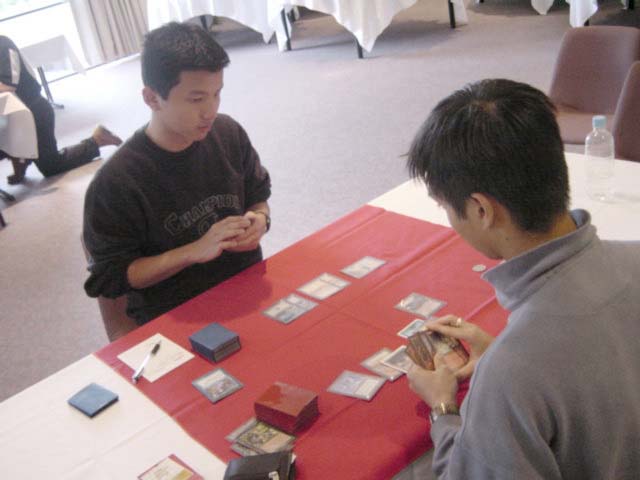 In the final round of the swiss, Pang Ming Wee with his Nether-Go deck paired up against Michael Mercer and his Fires deck.

Michael opened with Birds of Paradise, Dustbowl and Fires of Yavimaya. He attempted to add a River Boa for offence but Pang Ming's Absorb stopped that idea from coming to fruition. Michael's Dustbowl helped to slow Pang Ming down but it didn't stop Pang from counterspelling the Blastoderm he attempted to play.

Michael managed to get a second Blastoderm into play, but it didn't last long thanks to a Wrath of God from Pang Ming. As a desperate attempt to have some sort of threat in play, Michael played Birds of Paradise and followed it up with a Flametongue Kavu (taking down his own Birds). The Flametongue Kavu ended up going all the way, with Michael finishing the job with an Urza's Rage. 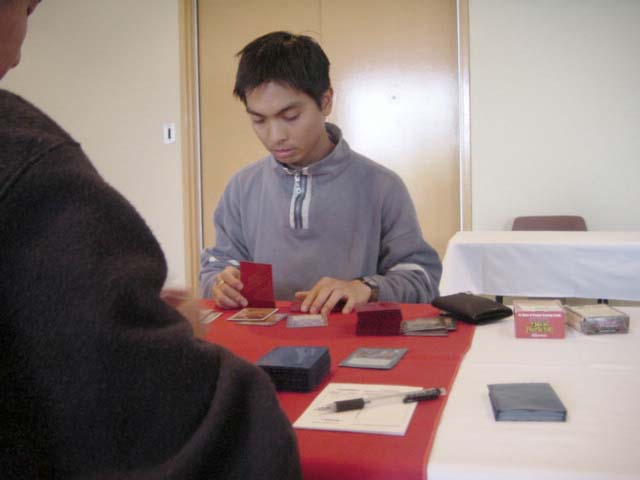 Game 2 was all about sideboard cards. Michael mercer started with an early Birds of Paradise and Rishadan Port. He then managed to do 9 points of damage with a Blood Oath naming instants.

A Dust Bowl joined the Port shortly after. These two combined to lock Pang Ming's mana and when Michael played an unanswered Boil it was basically game. A Blastoderm came to play on Michael's side and when his twin brother hit the table it was all over for Pang Ming.