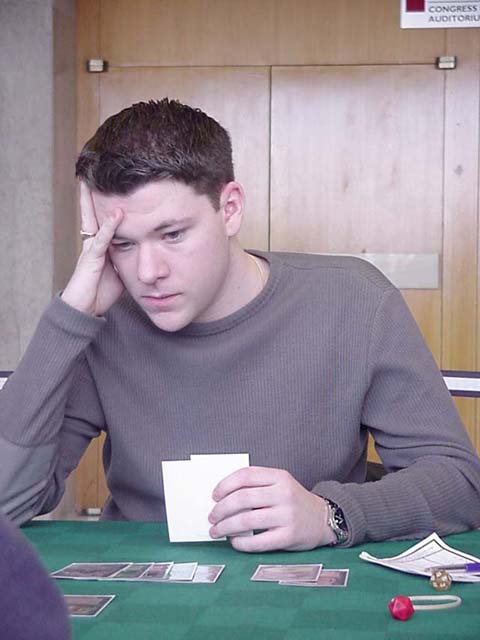 Both players needed to win this round in order to be able to get in the top 8.

Mariani does not take a mulligan even though he only had two swamps in his hand. Luckily for him he drew the Mountain he needed and cast a Cinder Shade, which got Assaulted. Mariani played Soul Burn on the Quirion Sentinel that Morgan had played. Not much later Mariani noticed, that his opponent was actually playing four colors and had four different basic lands out. Mariani plays Mire Kavu and Rainbow Crow.

The Swedish player used Darigaaz's Charm on the Mire Kavu and ended his turn. The Portuguese started to attack with his Crow, while his opponent attacked with his Aurora Griffin. As Mariani got to six mana, so that he could play Plague Spores targeting the Griffin and the only Plains Karlsson had.

After some thinking the Swedish player decided to play Restock on the Charm and the Assault. Morgan drew yet another spell to remove the freshly cast Sparring Golem. Mariani ends up casting some more creatures and his opponent concedes. 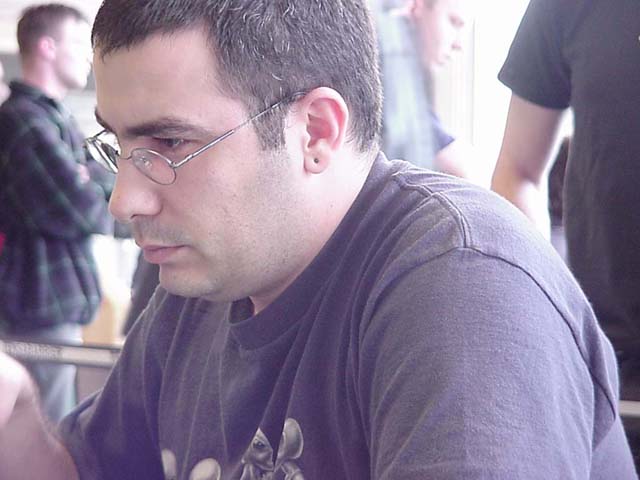 Both players started well off by playing a familiar each. Morgan then plays another familiar so that he then controlled two familiars. Mariani cast a Phyrexian Slayer and ended his turn. His opponent although, played a Pouncing Kavu and immediately attacked him with it. Mariani played a Faerie Squadron followed by a March Crocodile returning the Faeries to his hand. He then swings for three. Karlsson cast in the meantime a Serpentine Kavu, gave it haste and brought the Portuguese down to thirteen. Morgan attacked yet again and cast his first creature with flying, Angel of Mercy. Rui was at nine life and went into a defensive stance. The Portuguese player was holding four very powerful cards like Plague Spores but had no red mana to cast it. Rui is getting annoyed at his deck since he wasn't getting any red mana. That cost Mariani the game. He just didn't draw any Mountain.

The pressure went up with only twenty - two minutes left in the round. Both players need to win if they want to have a chance at the Top 8.

Morgan had a rather bad start having to mulligan once. Mariani on the other hand had a very aggressive start with Sparring Golem, Mire Kavu and Volcanic Imp. Morgan was stuck at three mana and didn't have any green mana source to play his Quirion Elves. After Mariani even dropped an unkicked Faerie Squadron to show Morgan how determined he was. His opponent realized he was done for. Mariani only confirmed this by showing him two Magma Bursts he had in his hand.